This post begins the review of Frank Longo’s The Nastiest Sudoku Book Ever with a  review table and  solving highlights of two review puzzles, Nastiest 607 and 629. The original post was revised to correct errors found by my backup team, Gordon Fick and Strmckr.

Recalling the fun I had reviewing Frank Longo’s Absolute Nasty IV, and having gotten over my disappointment Frank’s supplying puzzles for Peter Gordon’s Guide, I thought that his compilation of the Absolute Nasties would be a good test of my progress over four years of the blog. Since Frank, in his introduction, says “the 706 puzzles generally increase in difficulty, from ‘very hard’ to ‘insane,’ as the book progresses, I tried to capture the flavor of the last 100, being careful to avoid duplication with the IV review. I went from 607 to 706 in steps of 11. 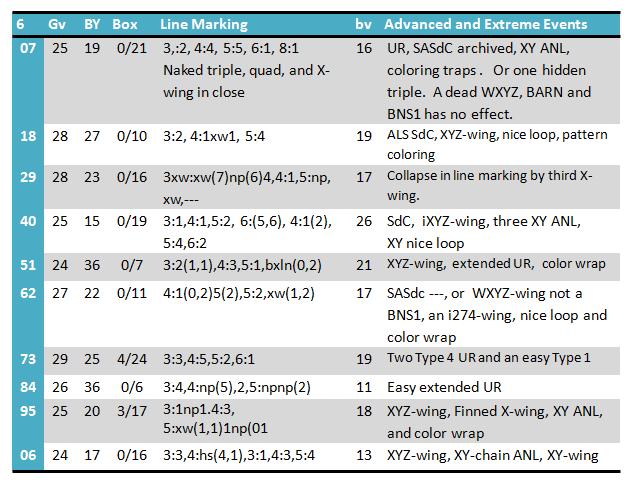 In the next few posts, we’ll look at the advanced techniques that seem to be required, with some attention to areas that could have been overlooked in earlier reviews. Frank is generous with givens. The basic solving data includes the bypass, which is generally successful. The table shows the number of committed cells in clues and locked sets. 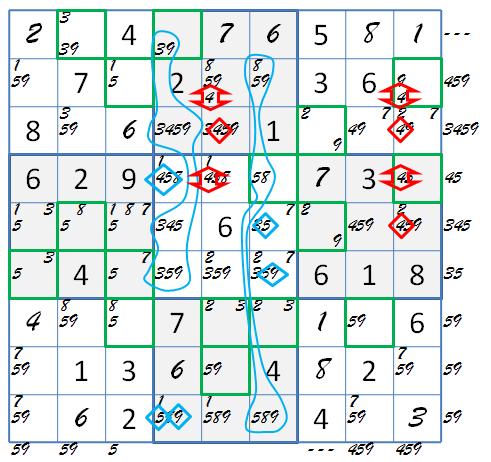 The first puzzle I looked at, Nastiest 607, had a lot to say. I was closing out line marking when I came across two locked sets.

I missed a hidden triple after the 4-wing but my backup reader, Gordon Fick, sent me word about it.

The prodigious removals create a naked pair r8np18, and a unique rectangle demanding 4r4c5 and an immediate collapse, beginning

I skipped Nastiest 618 to get to what I thought was another WXYZ-wing outside of the bent family, but two friends I’ve mentioned before, Strmckr and yes, Gordon Fick, pointed out a small detail I had overlooked, the primrose path of Nastiest 629, lined with X-wings, to a collapse in line marking. So I’ve revised the post to tell the story of the basic solving of 629 and where I failed to follow the Sysudoku line marking process that would have solved it easily.

The first removal occurs on the first fill line of line marking. The 8-wing is noticed as I move the 8 mark from the middle line to the bottom left corner to indicate the line slink in r1. In that process, I’m supposed to scan for any matching slinks on other rows. I mark the removal and copy the slide, but leave the “fishes” in place to guard against accidentally adding an 8 as I fill other rows.

If you’ve not looked into how sysudokies populate the grid with candidates, you can start with the givens on this grid, and follow the 2-D trace. The first part is the bypass of pencil marking, very generous in this case.

The second part is box marking, with no 6: list, since all 6’s have been placed.

By taking the givens from the grid above, or your copy of The Nastiest Ever Sudoku Book, and with reference to the traces page, you can follow the story exactly. As you do that, compare the actual effort and engagement involved in the way you normally do it by hand.

Line marking (3f:)starts with a fresh slide, after bv cells have been bordered. The smallest number of free cells is three, the minimum, and the follow up of the 8-wing runs down the page, and across the list.

A second 2-wing is encountered in marking the last row, r3. I saw the naked pair in c7, and should have scanned the other columns, looking among the bottom right corners of cells for a matching slink. Then , in removing the victim, I would have seen the third wing, and been off into the collapse.

Failing that, I should have spotted that second wing in line marking closure. With the rows filled, you check each column with no fill string for a column slink created by the row fills. That’s when many bottom right corners are filled. When I got to c7, and placed a 2 mark in the corner by the 7, all I had to do is scan the columns for a match. But I didn’t.

The point is that the Sysudoku basic marking procedure, much more efficient and secure that the scanning for candidates that most solvers do, was not at fault in this case. If you solve by brain, you should try it.

The next post continues this Nastiest review, with Nastiest 618, the skipped one.