Longo’s Nastiest Ever After

This post finishes the illustrative review of Frank Longo’s The Nastiest Sudoku Book Ever, with review puzzles 673, 684, 695 and 706. The bv scan and occasional easy coloring continue to be enough for what Frank claimed to be the toughest part of this not so nasty, but entertaining, collection.

Nastiest 673 catches a nasty case of Type4 Unique Rectangle. One of the worst I’ve ever seen.

On the left, the 3-slink prevents any UR partner 4 from its corners, bringing in two more bv.

In the middle, the 5-slink throws out the only two 6’s in c4 outside of the N box, for a boxline removing two more.

Then as the dust settles, another UR emerges, obviously requiring the presence of 9r1c8. I include the magic top hat nice loop that I thought would be important, but now it only marks the raging path of the collapse.

See a doctor about that nasty UR infection, Frank.

Out of line marking, Nastiest 684 only needs 7r7c8 to prevent an extended unique rectangle and collapse the puzzle.

A regular 485-wing triggers a boxline for two more removals.

Then an XY ANL and the review’s only finned fish with a fin box removal.

When a large bv field brings out the crayons, two clusters are laid out. Two blue candidates land in the same cell, and get their clan ejected. Green then implies red and 695 is history.

On the battle field, you can see it all from here. 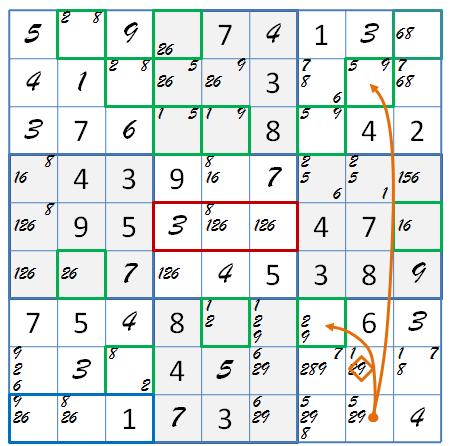 . . . an XY chain ANL (black)to remove 1’s.  A 12-wing (purple)removes 9r3c7, but not before another victim sees a wing of the 12-wing by forcing chain(red) through it. The collapse follows promptly.

From this pre- selected set of puzzles from Frank Longo’s The Nastiest Sudoku Book Ever , its fair to say that the book falls a bit short of the title.

However, that’s what we have come to expect from Frank, a ringmaster of the Sudoku circus. At least all of the reviewed nasties get into advanced technique, and with entertaining results, and basic solving is not difficult. This may be just what you want.

Next post, I return to the bent N-set methods to revisit the remarkable BARN, and tell how it was constructed by the equally remarkable StrmCkr, from timber cut by the Sudoku sage, Andrew Stuart.

2 Responses to Longo’s Nastiest Ever After