How the BARN Was Built

This post continues a report on the discovery of a practical human solving technique and the need to have it properly classified and named. This method has been credited to its author, known by his forum moniker as StrmCkr, on Andrew Stuart’s Strategies page. But as of now, it is labeled there somewhat inaccurately as an extended type of WXYZ wing.

In my post of last August 25, Please Give WXYZ Some Space, I proposed the title, Bent Almost Restricted N-Set, as a name for this technique, with BARN as a convenient acronym. An n-set is a set n cells containing only n numbers, in a bent region, the union of a box and a line. I introduced the term in describing Bob Hanson’s “bent naked subset” technique implemented in his Student Assistant solver. The BARN’s “almost restricted” refers to the condition that candidates of n-1 of the n-set numbers are confined to one of the bent units, the box or the line, and therefore all see each other. In reference to the restricted common of the ALS, StrmCkr referred to these n-set candidates, or their values, as “restricted”.

Why are the unrestricted candidates of a bent n-set toxic? Here’s my diagram from the revised August post. It shows a 4-set case, the type currently disturbing the peace in the WXYZ-wing neighborhood. The curves enclose the locations of the four numbers within the bent. The a-candidates are restricted by the row; the b and c-candidates, by the box. An outside z-candidate sees both z-candidates in the four cells of the 4-set, and is eliminated.

To understand why at least one of the z candidates in this 4-set must be true, we have only to look ahead to the solution. There, three of the 4-set cells will contain a different restricted number. The solution contains only true numbers, and each restricted set has only one of these to give. All three must contribute one. The fourth cell will contain the unrestricted number Z, It is the true Z candidate in the box or the line, or both, depending on where it is in the bent region.

Even though you have to agree with every statement just above, it still seems like magic, doesn’t it? The trick occurred when you selected the cells to form an n-set in the bent region. 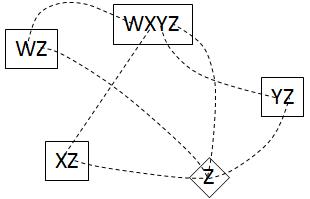 So the bent region is critical to the BARN. An XYZ wing, or the WXYZ wing as depicted here, avoids being a BARN by spilling out of this region, perhaps by use of forcing chains as wing attachment winks. Forcing chains, often spotted with ER, also enable victims to see candidates of outlying wings.

Worth repeating here is that forcing chains are weak links in techniques and a form of ‘seeing’. They are not techniques in themselves, as some have it.

A human solver has every reason to search for both WXYZ-wings and BARN’s, and their spotting characteristics, aside from the number of cells, are quite different.

Another member of the bent family, described in my August post, and in my review post Bent N-Set, was introduced by Bob Hanson on his Student Assistant Explainer page. In Bob’s BNS1 technique, the toxic set number is the single common n-set number in the two bent “wings”, the box and line remainders outside of the box/line intersection. Actually BNS1 is an alternate way of spotting a BARN. If there is exactly one n-set number common to the wings, it is the unrestricted number. Also, if there is no common n-set number in the wings, all numbers are restricted. This means the n-set is closed, and candidates of every number form a toxic set. I have called that a BNS0.

The BARN was introduced to the Sudoku community in an EnjoySudoku forum post titled WXYZ – Wings, in May, 2010. StrmCkr began with a quote defining the WXYZ-wing from Andrew Stuart’s Strategies page (still current) and his The Logic of Sudoku of 2007:

StrmCkr proposed to amend the definition to read: “Where W is required, but not all of the digits xyz are required within the hinge to function”

“To function,” here means to have each possible value of the hinge cell force one of the four WXYZ cells to resolve to Z in the solution. This operational way of defining the WXYZ-wing is familiar territory for solver programmers. Andrew Stuart uses the same concept in the solving technique he calls the Cell Forcing Chain. Any result forced by every possible candidate in a cell must be true. Placing this “function” in the WXYZ definition paved the way for the BARN invention, and for its invasion of the WXYZ-wing’s living quarters. While it is good tactics in solver code, it’s bad advice for human solvers.

There are alternatives. Why not just leave “ function” out of the definition, and say, after defining its structure exactly as Andrew does, that any cell that sees all four Z in the wing can be removed. Or more directly, that one of the four Z in the wing must be true. Or more logically, to observe that if none of the Z are true, the hinge will have no true candidate.

The operational function in the definition that StrmCkr relied upon for naming the BARN, but ignored in his proposal, is simply the reason why one of the four Z must be true. Human solvers should be using their insanely capable visual powers to look for solving structures, and should not be advised or led to waste them looking at the consequences of each candidate of a cell being true.

The fortunate consequence of Stuart’s widely spread definition of the WXYZ was that it challenged StrmCkr to think outside the structural box and consider how many ways can you can arrange four naked, bent confined cells to have this function. He confronts his forum colleagues with an enumeration of BARN configurations, lettered w, x, y, and z, with z being the unrestricted. There is nothing wrong with this lettering, but it does make the BARN look a lot like an amended WXYZ-wing confined to a bent region. Here I’ve substituted abc for wxy in the enumeration, for that reason.

There is no loss of generality by having ‘a’ always appear in the intersection, which is as close as we get to a hinge in StrmCkr’s enumeration. Similarly, all permutations of the left, center, and right boxes are represented.

It’s clear that structural parts of the WXYZ-wing beyond the contents of the hinge were ignored in the enumeration, and it is describing a bent entity other than a traditional WXYZ wing. However, StrmCkr gets credit for the BARN by item #1 of this “corollary” to his proposal at the end of his post:

“WXYZ-Wings can be considered as a group of 4 cells and 4 digits, that has exactly one restricted common digit. “

The corollary notes the primary feature of the BARN. However, since he does not present any different rationale for the toxic set, StrmCkr is allowing, in effect, that BARN has the same toxic set as the WXYZ-wing, and for the same reason. But that simply is not the case. For one thing, the means of deriving the BARN and WXYZ toxic sets are entirely different. Also the wing is not confined to the bent region, as is BARN. Finally, StrmCkr’s stated proposal itself, for Z to be absent from the hinge, would only convert the WXYZ wing into a Death Blossom of three petals.

Thankfully, StrmCkr did not hesitate to abandon the structure prescribed by the WXYZ definition in his enumeration, and called attention to the primary conditions of his enumerated examples of the BARN. Perseverance is a primary virtue of programmers, but in this case, it would have been better for StrmCkr and the forum evaluators of his proposal to forget its origins and accept the BARN as a new technique, or maybe a new form of Hanson’s bent naked subset.

With the BARN, human solvers can spot N-sets, then trace out n-1 restricted commons for BARNS, then find outside Z’s seeing all of the unrestricted Z’s. They will find most unit seeing WXYZ-wings, and some WXYZ-wings with forcing chain winks. They can use the Sysudoku XYZ-map for that. And if the BARN fails, they can look for a BNS1 or BNS0.

The forum response to StrmCkr’s corollary version of the WXYZ-wing, back in 2012, was not its finest hour. There was no real challenge to justify why n-1 restricted commons guarantee the WXYZ eliminations, or why the structural variations he presented should be called WXYZ wings. StrmCkr was partly responsible. He shared with the forum community the failure to question why his enumerated examples performed the function of the WXYZ definition, but did not conform to the WXYZ structure. And unfortunately, he made another immediate proposal , not bent related, which distracted attention from the extraordinary corollary of his bent restricted WXYZ proposal.

StrmCkr did create something valuable for human solvers, a truly rare accomplishment. Actually it is the unlikelihood of this happening that best explains the  proposal’s forum evaluation.

Next post we embark on a critique of a Sudoku instruction book on basic solving. This time it’s Master Sudoku, by Carol Vorderman. Carol’s words of wisdom are accompanied by a range of puzzles from easy to super difficult (her ratings), so there will be the usual statistically insignificant sample of puzzles and illustrative highlights  as well.