The Chute Tabled Exocet of Unsolvable 181

This is a Thursday extra post reporting the sysudokie hand solving of an Andrew Stuart Unsolvable, #181 of January 2, 2016. It applies a tabulation method to resolve context of a double exocet, accepting their common solution for trials. I call it the Exocet Chute Table. The solution generally confirms the immediately announced solution of JC van Hay, a frequent contributor to the Unsolvables.

When I asked him, Andrew encouraged me to analyze some of the puzzles and contributed solutions. He calls them Unsolvable because the date-of-publication version of his solver doesn’t completely resolve them. The purpose of my analysis is to uncover ways in which a human solver can deal with them, without the help of any solver software. I do rely on MS ©PowerPoint and © Word to manage, display and archive the solving. I welcome comments about these solutions on this blog, but please send comments on solver aided alternatives to the Weekly UnSolveable section of Andrew’s site. 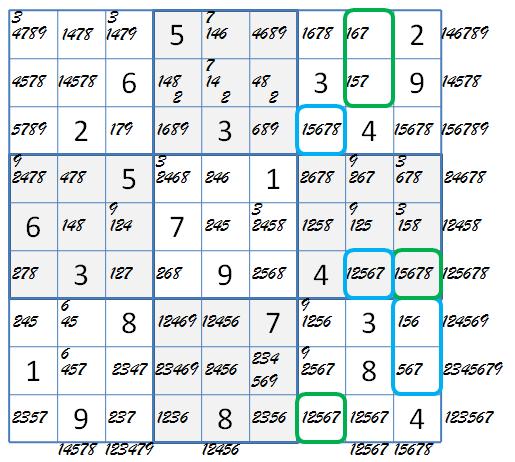 Here is the 181 grid coming out of line marking, the final stage of sysudokie basic solving. Pencil mark positions show the presence of box and line strong links. Strings along the sides and bottom are digits not locked along the line as clues or slinks. It is a monster class sea of candidates.

Blue and green Exocets are marked in the East stack.

The sea of candidates drown out

multi-value advanced methods, but a look at the X-panels suggested a pattern (template) analysis of 6 and 9. No results on 9, but freeform pattern analysis of 6 showed the patterns divided, with one to three. I did a trial on the single blue one, and it failed, giving two clues and two orphans to eliminate, but I decided to archive this trial, holding it out until needed, to see how JC Van Hay’s Exocet results could be achieved.

I first encountered Exocets in my adventures with Golden Nugget and Fata Morgana. In those monsters, I was lucky to find X-chains from base cells to target cells that could mix and match to carry out the Exocet qualifier test, the demonstration that every solution of the base is duplicated in the targets. The experience led me to label the Exocet as an extreme level trial generator.

Here, in the double Exocet, the problem is more complex. In carrying out the qualifier test, we are soon made aware that not only do we have to consider all 6 combinations of two digits in the base, but there are four ways to arrange numbers 2 and 8 in the East chutes(box/line intersections). That threatens to put 24 jobs in my in-box.

Out of sheer necessity then, I sought to head off that problem by determining the viable 2/8 placement prior to the 1567 testing. Labeling the digits a, b, c, d and naming the contents of the NE base as a and b, I tabulated the chute contents resulting from the 2/8 placements.

I am guaranteed a solution in 6 trials. Before trying 1 and 7 both ways, I would go with the naked pair 17 in the base. Lucky me, I started with 15.

The first noteworthy event was this 196-wing. It’s a regular wing, but its victims require forcing chain or ER vision to “see” the r3c6 wing. Or maybe, by updating line slinks as followed up on the 2 and 8 placement, I would have reached the 1-wing first. Anyway, between them, these two steps duplicate the results of the archived pattern trial.

Next along the way are two naked triples in c4 and then c5. With the candidate fog lifted, the slippery constraints that make this puzzle so difficult are very apparent. 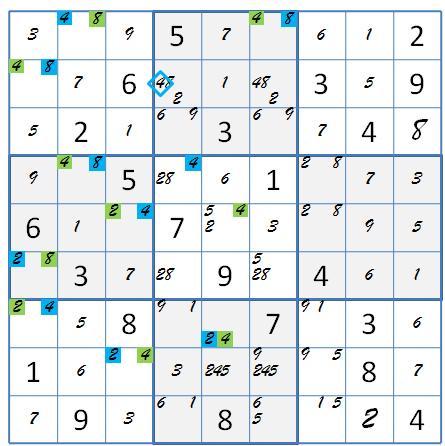 The almost BUG that is left begs to be colored, and the cluster traps 4r2c4 and wraps green with duplicates in c5. The puzzle melts into a blue puddle immediately.

One idea I hope that Unsolveable enthusiasts take from this, is to go to trial with an army, or at least a SWAT team of related candidates who are true or false together.