This post starts a two part review of Carol Vorderman’s Master Sudoku . The book covers basic solving in three lessons, with a set of puzzles appropriate for each. Here we consider the “easy” to “difficult” tactics, with her walk through “difficult” puzzle suggested as a homework exercise on the Sysudokie bypass.

The American Edition of Carol Vorderman’s How to do Sudoku is  an eleven dollar paperback , under the title Master Sudoku. Carol is a mental arithmetic performer on British TV, whose interest in Sudoku serves to popularize Sudoku solving over there, no doubt. Having spent the day with Master Sudoku at my auto dealer’s repair shop waiting room, I think that the original “How to do Sudoku” was a much better title. My interest here is whether or not you should give this book to a friend, hoping to get them hooked on Sudoku, in preference to just pointing them to the blog.

I’d say it depends on the friend.   Carol’s book is very good at enlisting confidence and getting people over the belief that anything mathematical is over their heads, or too nerdy for them. She offers a comfortably paced introduction to solving basic level puzzles.

But it could be a mistake to give this book to anyone you have pegged as a future sysudokie. It may try their patience and invoke their anger when they have worked their way through the “super-difficult” hints and puzzles, only to discover that there is a world of advanced level techniques in Sudoku that Carol never mentions, and they could have learned to master basic solving more efficiently . By the time they have finished Master Sudoku, such an individual will have encountered puzzles elsewhere, in which they have found all the candidates, but no solution. Being enterprising by nature, they might have answered the “what now?” question with bv level guessing, thinking that is how a Sudoku is normally finished. They might be so pleased with their “discovery” that they would never look any deeper into Sudoku. Know anyone like that?

So bottom line, if you want to be safe, give them Carol’s book, but warn them that it is just a starting point, and a second pass through basic solving will be the best preparation for harder puzzles. If you expect to be in touch with them while they are plowing through Master Sudoku, then you should be prepared for some “different” terminology. In Vorderman speak, a Sudoku grid is 9 x 9 boxes , divided into 3 x 3 mini-grids , named top left , top centre, top right, centre left, centre, . . .

Box marking is “slicing and dicing”, slices being rows and dicing being scanning down columns. Cross-hatching is “completing a mini-grid”. You slice across bands of mini-grids and dice stacks of mini-grids, completing mini-grids, rows and columns. Carol walks readers through a complete fill, pointing out that many alternate paths exist in the collapse. The easy level walk through illustrates how to complete each number before moving on to the next. Then there are 50 easy ones to solve.

For “medium” puzzles”, Carol adds the restrictions on slice and dice placements imposed by mini-grids. This brings in hidden singles, or in Vorderman speak “the only one that fits”. Considering the two free cells in a row or column, Carol only considers cases where one of the missing numbers is precluded by an intersecting line or box. She is not quite ready to introduce candidates. Her final step into medium puzzles is “slotting” , where she uses the knowledge that a number must appear in a chute to force it in an aligned box, my hidden double line exclusion. 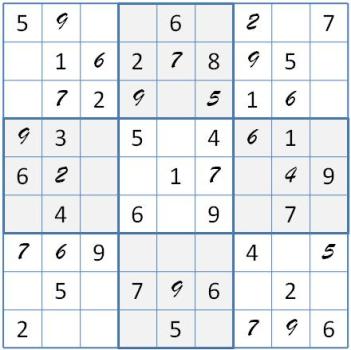 On the medium level walk through, Carol traverses the numbers, completing the first pass as shown here. In c2, she did not extend “the only one that fits” to do a naked single, but calls for a multiple passes over all the open numbers instead. This non reactive approach also applies to slotting, where Carol passes up the hidden dublex S2 when C7 is inserted. Two other slotted clues are found in this pass over the numbers.

On the second pass, the slotted S2 is missed, but it doesn’t matter. The puzzle collapses in a series of naked singles, “only one that fits”, and more naked singles.

Moving from medium to difficult, Carol introduces an attack based on the missing numbers in an intersecting line and box.

Everything in this book is explained by example, and Carol’s is shown here. The target is the bottom left mini-grid (SW box). Note the missing numbers are 3, 5, 6, and 8. Now notice the intersecting c3 is lacking 3, 5, and 8, so when it is filled, 6 must into r8c2.

Sysudokie readers could be wondering why the 6 placement done this way, when a much simpler dublex was there. Also why weren’t the two rows with only two free cells done first? Row r2 can be filled with 4 and 5 in easy puzzle fashion.

The intersection trick, and “the only one that fits” for mini-grids are to be done right along with the easy methods , number by number. Now I must admit that I have peeked at the super difficult chapter, and can report that Carol begins marking candidates there. So let’s assume that Carol has prepared her readers to do the bypass, but without writing in naked pair candidates, on her 50 difficult puzzles. It’s Wayne Gould’s “no pencil marks” solution.

Here is Carol’s “from start to finish” example for her difficult puzzles. The bypass starts at 6. I’ve added circles, as Carol does, for the possible cell locations of 6. It is a good way to represent the mental picture sysudokies use on the bypass. When Carol concludes her “bypass”, she marks her remaining “possibles” with pencil marks.

Using Carol’s circle map, see if you can find the three 6 clues that start her bypass. Then see how you would finish the bypass. Next time, I’ll checkpoint you and finish the Master Sudoku review.