In this post, two distinctly Sysudoku techniques have roles in a pattern trial of an Andrew Stuart Unsolvable, this time #183 of January 16, 2016. First, pattern (template) analysis on two numbers finds compatible partial patterns for a coloring trial. A perturbing property of freeform pattern analysis is explored, with a little help from a friend. Then in the trial, an attempt to construct an irregular XYZ wing reveals a particularly influential candidate that brings the puzzle to a collapse.

A special welcome to Weekly UnSolvable enthusiasts. This is the second post in a series intended to highlight tools and techniques enabling human solvers to resolve these puzzles logically, without arbitrary T&E probes, and if they prefer, using computer solvers, including Andrew’s, only for backup checkpoints. For me, the Unsolvable series is the Sysudoku monster for 2016. These puzzles are monstrous, having survived Andrew’s solver. Sysudoku is out to prove that sound methods, calm nerves, and a patient, focused hand can defeat them. The series started with the double exocet of Unsolvable 181, three posts back on February 18, where the chute table was introduced as a tool for exocet trials. 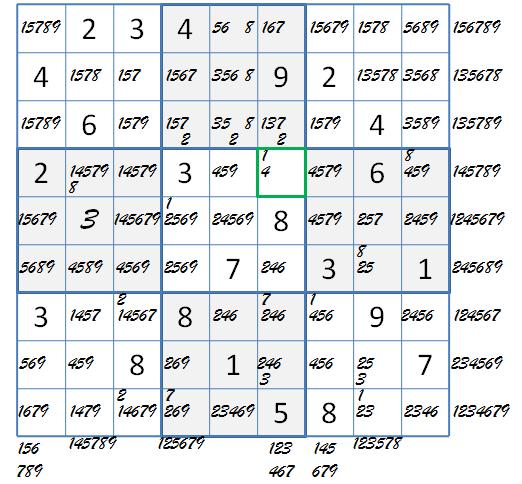 Basic solving is summarized in this basic trace:

W3 is the entire result of the slink marking bypass, a clue in the West box. You read a trace by filling in the grid, and by seeing where the 3 goes, with the puzzle in this state. The bypass is an optional first phase of discovering clues by mentally imposing slink marking without writing in the pencil marks. It’s a warm up for the very systematic processes of box marking, traced in the first line. One number at a time, The claims on a box are interpreted to write in the slinks(m), aligned triples (t), and for less stingy puzzles, clues.

Now don’t be lazy. Getting this down will enable you to closely observe sysudokie solving in these Unsolvable posts. So get out a grid, copy the clues, put in the W3, and verify why the box marking is what it is. Which in 183, isn’t much.

Now we come to line marking on your grid. All we’ve got here is the order in which lines are filled. But as you go along you can verify if it’s reasonable sequence to fill the easier lines first. Sorry Unsolvabrights. I do r1, r2, r3, . . . and not A,B, C . . . Usually the count of free cells (6f) starts low from 3f and builds up, but this is 183. On each line fill, build a string of possible fill digits, then apply them across the line. There’s usually a lot more to do in line marking. Close in the trace is the extraction of line slinks on lines not marked when one grid side is covered. We also mark the bi-value cells (bv) and X-wings in line marking, with green boxes. See it? Also, if you’re into AIC, forget it. Not a single AIC hinge.

When faced with such an overwhelming fog of candidates, sysudokies skip the bv scanning methods and go directly to X-panels . These are 9 by 9 tables showing only the candidates of a single number. They cut the fog by ignoring clues and ‘other’ candidates. X-panels are good for fishing and the search for X-chains on a first pass, but in a case like this, we circle back through the X-panels for pattern analysis. 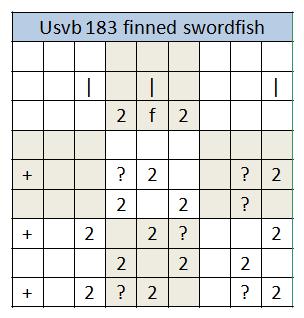 Here is the 2-panel with the 183 trophy fish. Removing the fin (f) leaves a column swordfish with the victims shown as question marks. In a very tough kraken analysis, every one of the potential victims(?) escapes by not ‘seeing’ the fin. Try it out this easy way. Copy the panel into a ©PowerPoint table. Starting with a “victim” wipe out every 2 it sees. If any singles or fish remain wipe out their victims. In all of these victims, the fin remains. I’m not going to checkpoint these surprising results. If Virginia can do it, so can you.

Here the X-panels yield no X-chains, to me at least, grouped or otherwise. So we move on to pattern analysis. The solving public has been warned to stay away from pattern or template analysis, based on the mistaken notion left by the Pattern Overlay Method (POM) that every pattern of every number must be known, so that elimination of every pattern that conflicts with all others will leave just one for each number. Obviously a job for computers only. Sysudoku has demonstrated that human solvers can take advantage of weakly patterned numbers to find candidates in no patterns (orphans), and use partial patterns on some numbers to extend coloring clusters and formulate trials. The effort was inspired by Andrew’s treatment, in The Logic of Sudoku.

You may need another update here. What is a sysudokie trial? It is a logically derived set of candidates that are all true together. The coloring trial is the most widely known example, but Sysudoku introduces the single alternate Sue de Coq and the nice loop coloring extension as well.  In the most useful trials, the set is all false together as well. The larger the set, the more decisive the trial. The solver uncovers puzzle logic either way.

Unsolvable 183 is weakly patterned in the South band and East stack. A freeform analysis of the 1-panel gives up that toehold. In MS graphics for ©PowerPoint and ©Word, a freeform is an inserted shape, a string of line segments, each completed by a click. Each freeform across the grid and hitting every line and box just once defines a possible pattern(template). It’s easy to prove.

To make pattern analysis humanly practical, it’s necessary to choose the battlefield carefully. In 183, the South band and the East stack both divide freeforms naturally into two groups. In the original post, I had freeforms South to North. Here, in a little more detail, are the blue group freeforms. 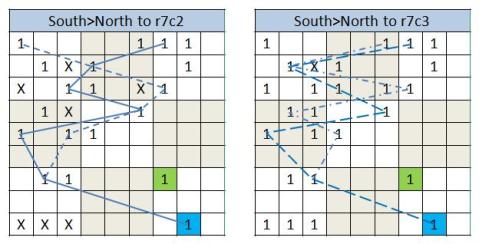 I had the freeforms of the left panel, and concluded that r7c3 was a blue orphan. But shortly after the post came out, I got a gentle alert from Andrew to look again. Back on the freeform drawing board, I came up with the right panel forms, these going through the supposed orphan. But even worse, now I had only one cell on all the blue patterns. 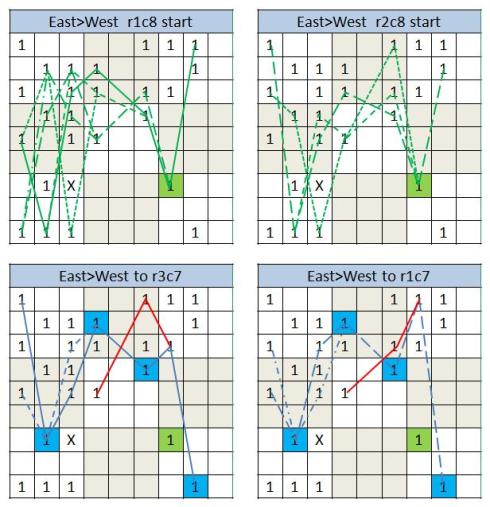 I have hard knocks experience that freeforms don’t capture every subtlety of pattern constraints, and it is possible to get differing results from differing directions. Here are my East to West freeforms, and you’re welcome to weigh in for Andrew if I mess it up again.

Green freeforms are consistent, but at r3c7, the blue ones have 2 c1 targets and 3 c2 targets to hit. At c4, both paths must skip r7c3 to hit a line not represented in the next column. The alternative red form thru r1c6 has already used all ending targets at c4. A very similar problem constrains the r1c7 forms. Both patterns must skip r7c3, and the red r3c6 form has no c1 target left. The 1-orphan, and more importantly, the four 1-pattern nodes, are there after all. 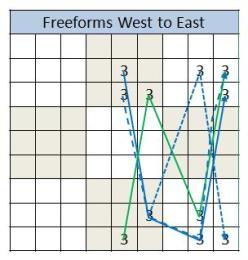 Also promising is the 3-panel.  There are only four possible 3-patterns, two of them are consistent with 1r9c8. One of these, the short dashed blue one, comes with the finned 2-swordfish eliminations, because it erases the fin.  If it fails, the trial leaves two possible 3-chains, one with grouped ends.

We’ll do the trial. The hope is to make progress, regardless. 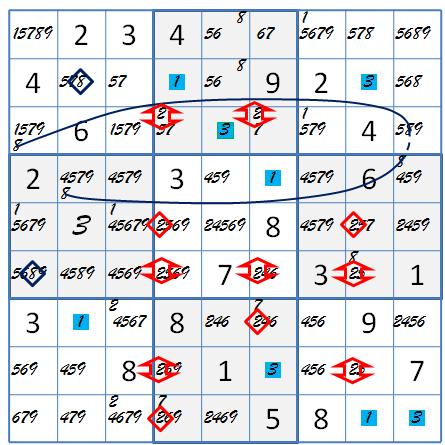 The trial begins with these advantages, but it is still just a trial. On a grid copy, we post the trial clues, noting eliminations, and track the marking with a trial trace. New clues are centered, but kept at pencil mark size. Only the exclusively green candidates are eliminated from the green freeforms.

Note that 1 and 3 patterns are not decisively interlocked, but quickly found contradictions may uncover an “obvious” merge that I don’t yet see. It starts off nicely with a 8-chain ANL, due to the trial placement of 3r3c5. 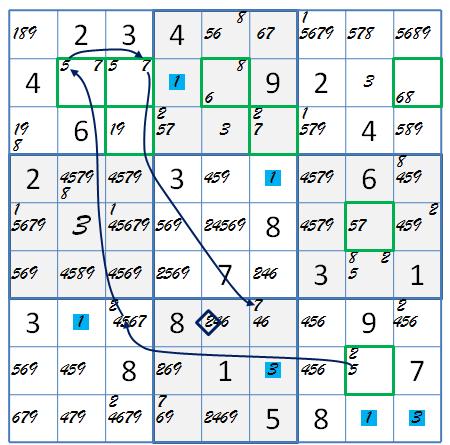 Making use of the newly trial acquired bv, I was looking for a forcing chain wink (weak link) to attach the 25 wing to the 257 hinge for a 572-wing, when I noticed the surprising influence of 5r8c2, and decided to use it as a continuation leg of the trial.

Yes, it’s getting close to a cheap bv trial, and you are free to look for better evidence, but this post better end soon.

Of course, I copied the slide, to be able to come back, and continue the trial with 2r8c2. This backstage admission alone could convince you to use ©PowerPoint for this backtrack ability. 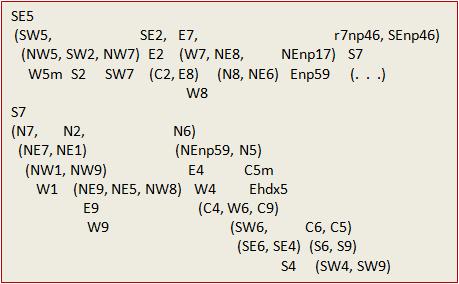 Well, there was no backtrack. In case you’d like to follow the Sysudoku trial trace, here is the collapse:

A page on traces explains them in detail, but with an updated grid in hand, you can figure it out faster: lists are completed all at once, then left to right, each cause’s effects are turned loose to race downhill.

Thanks for following the comment and coming by.  We’ll continue with selected Unsolvables down the road. How could a sysudokie pass them up? But in return, I’m expecting to see some sysudokie tricks in your comments in Andrew’s Unsolveables. OK?

Next is a brief review of the IQ and Insane puzzles in Djape’s self published Hard Sudoku book.