Other Pattern Trials for Unsolvable 190

This post continues with UnSolveable 190 to point out  alternative pattern trials leading to the solution, by clearing the monster fog of candidates..

Here again is the  grid after the blue pattern trial of the first 190 post.  Considering  the shorter 8 patterns remaining,  we might be looking for pattern restrictions on other X-panels.

Below are the South to North 4 freeforms, divided  into pink and olive sets by their starting cells in r9.

Three pink freeforms converge on five candidates.  When a fourth, the red one, reaches c5, it has used up the columns for its r2 node.

Although the olive freeforms are more numerous, sketching them out reveals  three orphans belonging to no possible 4-pattern.

Better than the 8’s, the pink  4-pattern trial can use all five shaded cells as clues, including r5c1 that is visited by olive freeforms.  All 4 candidates outside of the two pink freeforms are discarded for the trial.

The trial forces all 6’s from r9, a kind of salute to Andrew Stuart’s Unit Forcing Chain technique that I am happy to use when  one is handed to me, but for which I don’t recommend searching.

Winston, I did it again. 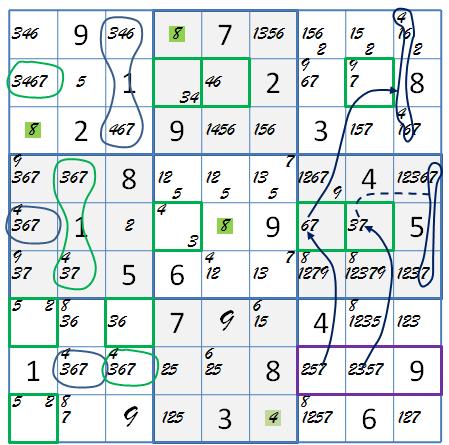 The now validated olive patterns have only one node in common, 4r6c9. Starting back through the bv scan,  the single alternate Sue de Coq SEr8 with contents 9(2+5)(3+7)+739,  is now effective.  The extra chute solution term 739 forces all 7’s from c9, by generating the naked pair 46 in the c9.  This leaves the Sue de Coq to confirm 6r7c8. 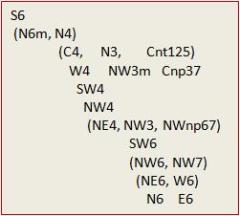 The marking uncovers the double exocet solutions, and clears the playground for some advanced sports. 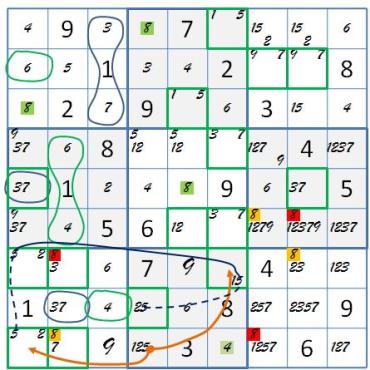 Then a 3-BARN, or an ALS-XZ if you prefer, shows up 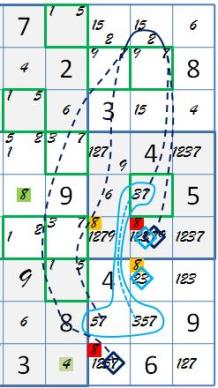 All of this allows the red/orange cluster to expand to reach the 5 trap the orange wrap depicted below.  The  trap occurs when the victim sees both colors, one of which is true. Orange is trashed when an orange 7 forces a rival 1 candidate to the orange 1 in r9.

The confirmed red army collapses 190 into the solution  noted earlier.

After the first blue green 8’s trial, the 7 panel is an especially easy route to the 190 solution. Starting freeforms south from r2, there are two sets of two patterns, one set for each starting candidate.  One set hits a stall , broken by that same 125 wing with ER victim we’ve seen twice.

Trials based on  pattern restrictions, signaled by  sparse edges and by simultaneous row and column slinks,  have taken over as the primary Sysudoku pattern analysis tool for extreme puzzles, in place of LPO, the overlay among sparse panels that I started with

Puzzles unbalanced enough to offer exocet opportunities, are also subject to these weaknesses, easily read from the X-panels.

Next, we solve Unsolvable 190 yet again. This time, to introduce a new method of reducing conventional exocet trials to a more practical human level.  Cross Line Filtering organizes and extends the Junior Exocet method of the EnjoySudoku forum, recently compiled by David P. Bird.