This post introduces a human engineered filtering method for reducing  exocet trials, in number and complexity.  The method is designed to follow the Sysudoku Chute Lettering  technique  introduced previously in this series of posts on the Andrew Stuart Unsolvables .  Here the method is explained and illustrated.  Readers are challenged to apply the method to remaining trials of the double exocet of Unsolvable 190.  The following post will be a checkpoint on this sysudokie homework, which does include the puzzle solution.

My recent project to demonstrate logic based human solving  methods for Andrew Stuart’s Unsolvables  has me considering monster-killing exocet  trials more seriously.  UnSolvable after Unsovable, these unbalanced puzzles include exocets more often than not, many doubled in a single band or stack. For that reason, and at the nudge of my chief scout,  Gordon Fick, I returned to the EnjoySudoku forum to catch up on how these worthies have resolved the problem.  The bad news is, they haven’t.  The good news is the extensive compilation of what they have accomplished, by senior contributor David P Bird.

Consider the solution of the exocet cells as distinct from the solution of the puzzle containing the exocet.  Two digits of the base cells are repeated in the targets.  Bird’s compendium clearly reflects expert opinion that one of these exocet  solutions is very likely to match the puzzle solution – likely  enough to justify using the exocet solutions in trials.  In a double exocet such as Unsolvable 190, the two exocets each contain a different pair of the identical base cell digits in their base and target cells.

There are 6 combinations of two target digits out of four base digits.  Some of these trials require either a single trial with both base digits in the target cells or two trials on the two possible placements of base digits.

In the Bird compendium, two variations of the exocet are considered.  These two are represented in the panels below, with base cells (B) and target cells(T), shown here  in their Unsolvable 190 positions.  Requirements are placed on base (B) digit candidates in companion cells(C) and crossing line remainders(S), to guarantee that a base set solution can solve to an exocet solution.

In JE and JE+, the TC, CT, QQ and RR pairs of cells in crossing line are called object pairs.  Bird’s requirement for JE object pairs is that “base digits only appear as a candidate in one (the target )cell and not in the other(the companion).

In my original post,  I interpreted this to disqualify the Unsolvable exocets  of my review series as JE’s, because, at the point where exocet trials would be useful, they have all four base digits as candidates in almost all object pairs.  Bird responded by starting an EnjoySudoku forum thread entitled Sysudoku Exocet, reporting that I had misinterpreted his Junior Exocet definition.  I’m grateful for David’s introducing the blog to the forum, and pleased to learn that Unsolvable Exocets do qualify as JE’s.

My problem was that I took the target’s companion in the quote above to be the companion in its object pair, in the same chute(mini-line).  It is actually the C cell in the other object pair.  The JE condition 2 goes beyond requiring the two targets to resolve to two base digits.  It bans other base digits from the object pairs, guaranteeing the targets resolve to two different base digits.  The added Requirement #2 sets up the JE elimination rules on true base digits in S cells which are enforced by the CLEF filter.

Requirement #2 has another profound role not explicitly addressed in Bird’s description.  It is the basis for selection of the target cells, at least in the cases I’ve examined.  The chutes selected among Unsolvable alternatives appear to be the ones meeting this requirement.  The requirement, and the resulting selection of targets, goes beyond champaigne’s Exocet to a more specific trial, more likely to succeed.

In this revision of the original post, I’m withdrawing my speculation on the effect of chute lettering on JE+ exocets.  Considering who’s watching,  better wait for evidence.

Bird’s study of the Junior exocets has the objective of bypassing the more specific trials with single base digits in the targets.  Unfiltered, this could amount to 12 trials: six selected pairs, and two ways to place them in targets.  By limiting to the Junior format in which target and companion can hold only one of the selected digits, then one can say that each target digit appears twice in the three crossing lines. The result is a host of rules for eliminations.  Bird acknowledges the difficulty of spotting cases adhering to these rules, and recommends recognition software for this task.

Since the JE conditions are not met by most of the Unsolvable exocets encountered so far, I was pressed in the Unsovable series project to use the forum’s insights about the crossing lines in a more specific way. I expect the resulting method will work very well for the JE’s as well. 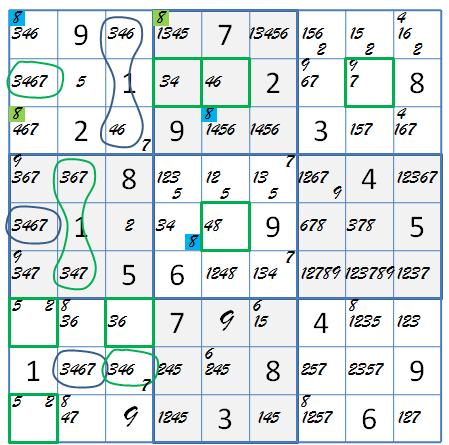 Adapting Bird’s crossing line spotting technique into a constructive filtering procedure for exocet trials, here is the Sysudoku Cross Line Exocet Filter.  For this demonstration, return with me to the line marked 190 grid, after placement of extra digits 2 and 8 in the West chutes, by Exocet Chute Lettering.

We can already see that 3&6 is impossible for the blue exocet, because of the bv 36r7c3. Also, a blue exocet without 7 will require a green exocet with target 7r8c3. 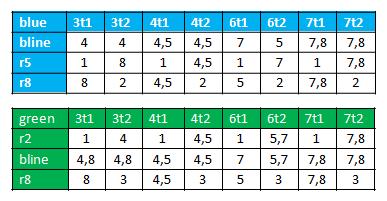 We start by filling two target placement tables.  In each, we tabulate the possible placements of each digit in the crossing lines(S above). We do that for two cases: the digit in target 1 or in target 2. The base line of the blue exocet is r2.  In the green one, it’s r5.

The idea is that exocet digit placement in the base cells and targets impose fish like restrictions on crossing line placements.  In r5, 3 is a candidate in columns 1, 4 and 8. In the blue 3t1 column, the 1 is recorded because it accounts for the only 3 in the row.  But in the 3t2 column, it isn’t recorded, because that possible occurrence cannot cause a conflict with another digit on the r5 crossing line.  The 4 isn’t recorded, because column 4 is taken by the r2 line in the base line r2 in the 3t2 case.

On the other hand, the same digit in more than one column of the same line is not a conflict. For example, 4,5 in two rows means 4 in one row and 5 in the other.  The 7 in the 6 target cases conflicts with the 7,8 in the 7 target cases only when 6 and 7 are targets together,  eliminating column 7 in the 7 placements.

The digit tabulations of the double exocet are done independently.  It’s done the same way for a single exocet, but in the double exocet case, the two exocets compete with each other on the columns to eliminate digit combinations. Check me out on the target cases in the green exocet.

First up is the blue exocet with 3 and 4 as targets and  the green exocet  we concluded above had only one placement – 6 in target 1, and 7 in target2.  In the cross line tables, we write the column locations of the target digits in the three crossing lines.  In double exocets,  do this for each target placement

Actually, this is what we first copy into the first blue line, but imagining how it looks on the grid, 4 is forced into column 5 in r2, and consequently, column4 in r5. When it is not possible to make such adjustments, the target placement is rejected by the conflict.

In the crossing line tables, it helps to  record 3 and 4 in their target positions, just to account for them in the table. This avoids distracting concern that digits do have to be in all three lines.

The third step in a double exocet is to tabulate the combined crossing line placements for eliminations and conflicts in small double combination tables.  The crossing lines of blue 3 and 4 with green 6 and 7 reveal a conflict in one of the blue target placements.

The resulting trial is much simpler than the pattern analysis trials of the recent 190 posts.

The conflict would have come earlier had we done that 8-pattern analysis earlier by coloring the 8-candidates.  The C8 on the third line erases a blue 8 after the NW blue 8 is confirmed, and a guilty verdict can be pronounced forthwith.

Note how the exocet trial’s conflict can be graphically recorded.

Previously oppressed Sudoku readers have to love it.

It may be a good time to point out, that the sequential filling of three tables for the Cross Line Exocet Filter is not strictly necessary for the Sudoku talented.  It’s just a mechanism that permits more typical solvers like me to concentrate on one operation at a time.  It’s a systematic way of tackling a less limited version of the  problem that David P. advised that human solvers not attempt.  As for you, dear reader, you get that problem on your  Unsolvable 190 homework.  Wouldn’t it be fun to discover, before next week, which 190 double exocet trials are rejected by CLEF, and how tough the 190 solution is?

The target placement tables are already in place for all complementary pairs of double exocet digits.  For the homework, you might make some copies  of the crossing line and double combination tables, and work on through the 190 double exocet trials.  I’ll be adding a presentation file with all three tables to the ©PowerPoint solving templates available by request from  sysudoku@gmail.com.  Tell your Sudoku friends, after announcing you solved Unsolvable 190 straight up, with nary an arbitrary guess.