This post is a completely traced report of a solving of Unsolvable 197 by Sysudoku Chute Lettering Exocet Filtering.  The Unsolvable 197 double exocet is in the North band, in contrast to the earlier CLEF solved Unsolvable 190, with the double exocet in a stack.  CLEF tables are therefore shaped differently. The CLEF solution here is preliminary to a comparison with David P. Bird’s JE solution of 197 on Andrew Stuart’s Unsolvables page, and general comments on exocets, to follow in later posts. 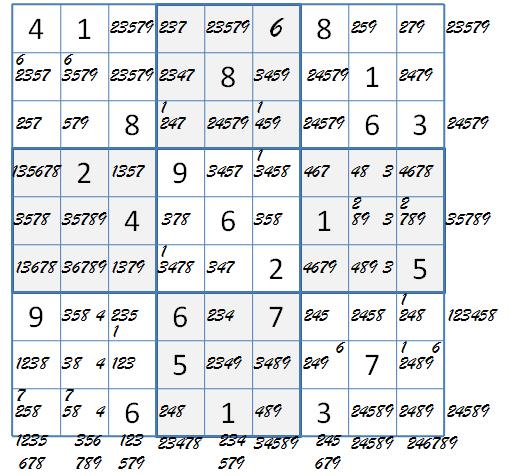 We begin with the line marked 197 grid. Fill strings are attached, conveying something of the effort already invested in the puzzle when the exocets are recognized.

Several box slinks and a single clue, N6, were found in basic marking.

My X-panels found no X-chains, fish, or pattern constraints to cut though the candidate fog.  JC Van Hay and David P. spotted the blue and green double exocet  on 2579 in the North band.

Of the possible four placements of nonbase digits 3 and 4 in the North row chutes, chute lettering reveals only one allowing the double exocet  with complemetary base digits in the target cells. 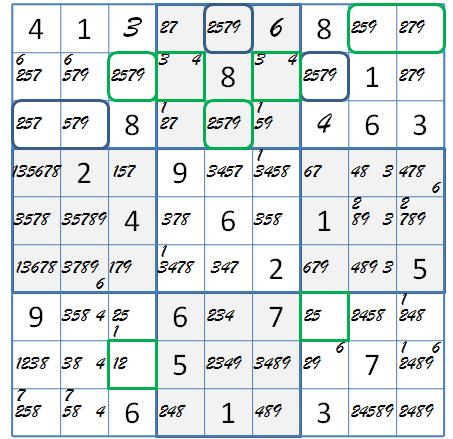 We will label targets t1 and t2 left to right in both exocets.

In this placement, bv 27r1c4 prohibits the green base 2 and 7, and combinations

Finally, if the green base does not contain 5, the blue base exocet has to have t2 =5.

To prepare for the remaining exocet trials, we tabulate for each base digit, its candidate locations in each of the crossing columns in both exocets. Then starting with blue 2&5, we set out to try each combination as necessary. 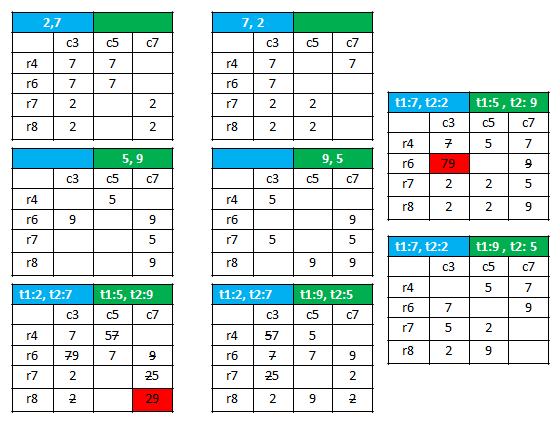 Here is the first trial setup, with marks dragged into the cell center for clues.  It collapses to a contradiction quickly.  The contradiction you get depends on the order you follow.

With green targets reversed,  the second 2759 combination reaches a contradiction as cell r4c3 is emptied.

Next, we  move on to … But wait, why should I have all of the fun?  Let’s make it  a team sport.  For next week, decide which combination(s) come(s) next, and perhaps, push on to the solution.

After that, we’ll be in a good position to appreciate how David P. sorts out the abcd of the solution in a more compact fashion.