For special friends attending the Akron Sudoku Tournament 2016 in particular, I also have a sidelines report on the two hardest puzzles, in the next two posts. The championship puzzle is at the end of this post, for everyone that missed it. As usual, I didn’t come close to getting on the stage.

In Chapter 1 of THLS, Denis Berthier introduces the concept of the Sudoku symmetry, by this definition:

Here are the grids for the three”hidden” symmetries that THLS advocates, applied to Royle 17-3 given clues, along with this definition: 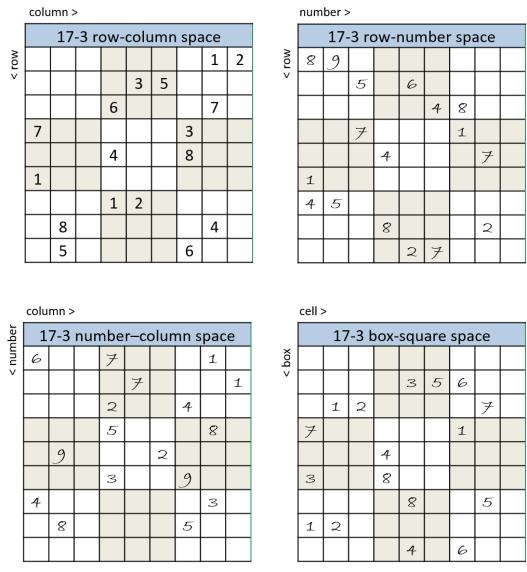 At the upper left is the grid of given clues, in what Berthier calls row-column, or rc space. For purpose of explanation, let’s label it nrc space. Upper right is the representation of the same puzzle in row-number, or THLS rn space, our crn space. The transformation is the interchange of a clue’s number with its column.  For example, 2r1c9 becomes 9r1c2. To make this transformation, move across each row, using the number for placement of the column as number.

At lower left is the grid of 17-3 in number-column, or nc (rnc)space. The transformation here is to move down columns, interchanging each clue’s number with its row, 3r2c5 becoming 2r3c5. Trying this out across the grid, I’m sure you couldn’t help but notice that, contrary to the definition above, nc space is not a valid Sudoku grid. Although it is not immediately revealed, neither is 17-3 crn space. These two transformations do not preserve the Sudoku requirement that a solution box contain exactly one of every number!  They do preserve the grid as a Latin square, but not as a valid Sudoku.

There are two primary reasons for Berthier’s introduction of the rn and nc symmetries.  One is to simplify the recognition of subsets in lines. Denis shows that they convert hidden singles to naked singles, hidden pairs in lines to naked pairs, hidden triples in lines to naked triples, etc.  In back passages THLS admits this is burdensome and unnecessary.  For hidden subsets, look for n numbers confined to n cells in the unit. This is effective for lines and boxes, and there is the scratchpad suset algorithm (10/25/11) for cases difficult to verify.  And besides, to apply these symmetries, you must transform, not just the clues, but every candidate, into at least two grids.

The other primary reason for the crn and rnc spaces is to define “hidden” chains. In later posts of this review, I will show that the necessity for such chains is not demonstrated in THLS, but as a matter of interest, these transformations interchange bv and line slinks in one direction.  Sysudoku advanced techinques and forcing chain“seeing”, missing in THLS, appear to compensate fully for any lack of hidden chains, and at a more practical computational complexity level for human solving.

If you don’t have a copy of THLS, I won’t ask you to generate and convert all candidates to duplicate Figures 2 and 3 on pages 37 and 38.  Just realize that in the crn and rnc spaces, you cannot use a box clue to eliminate candidates of the same number from cells of a crossing line. Nor can you trust a box to contain every number. That makes it tough to get eliminations and confirmations in these spaces to transform back into standard nrc space.

I haven’t described the bottom right symmetry above, the representation of 17-3 in box-square, or nbs space. Here, each row lists the contents of a box, with the boxes numbered in keypad order. The position of the number along the row signifies its cell position within the box. Each column shows the numbers in cell position.  THLS refers to a cell positions as a “square”. This representation plays a very small role in THLS. It allows certain “Sudorules” about lines to be restated for boxes “by analogy”.  The numbering of squares, and the location of candidates by squares permits the suset algorithm to spot subsets in boxes.

If you lost any hair reading its THLS version, the panel above corrects three nbs grid typo’s in my copy of the First Edition.

Next, regular sysudokies can work a very hard on an interesting puzzle, that reveals how hidden subsets are actually uncovered in Sysudoku basic. I will use it to call out THLS for its obscure reporting. It is Royle 17-13727, with the SudoRule solution and Berthier’s report on pages 120-1. If line marking is as tough as it looks, you’re missing hidden subsets. 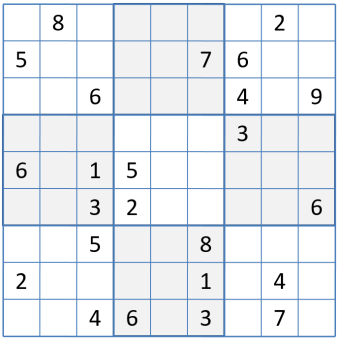 If you care to imagine yourself completing a puzzle with a big chart board and a big black marker in front of an audience of Sudoku fanatics, here is the 2016 championship puzzle of the Akron tournament. To compare with my checkpoint trace in the next post, start with the bypass, which is all clues except for naked (conjugate) pairs, while tracking strong links in your head, and trying to resolve units of three free cells or less. In the second stage (box marking), write in the strong links, adding clues they resolve. In the third, fill in candidates in lines in order of increasing free cells (line marking). That’s as far as you have to go.

The puzzle is by Will Shortz, who kindly provides all puzzles for the tournament, on condition that they not be identified by publication or number. So if you happen to find out, keep it quiet. OK?