Here we work through an advanced supersymmetry example from The Hidden Logic of Sudoku, without the symmetries.  The humanly practical tools of Sysudoku are entirely adequate to the task. The theme of this review is that the burdensome emulation SudoRules, Berthier’s seeming emulation of human solving, is just unnecessary.

The basic solving trace of Royle 17-1007 shows a stingy bypass. I take it to the first highlight, a naked quad. Or did you note it as a hidden pair c8hp17?

Did you notice that 5 and 9 nquad candidates are entirely within the SE box?  One 5 and one 9 must be true.

This trims the free cells back to four, and we eventually get a third naked quad in r3, with two numbers confined to the NW box. 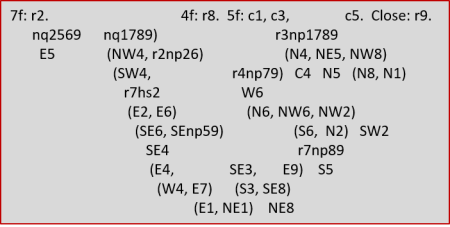 The finishing basic trace shows the second and third nquads plus a hidden pair in between, and only one line left for the close. 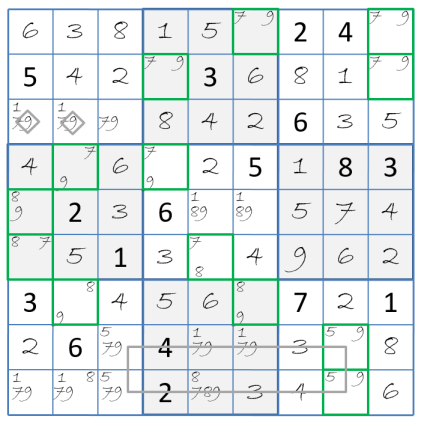 Following the Sysudoku Order of Battle into advanced, one of the aligned pairs leads to unique rectangle removals. Either 9 forces 7r3c3, and a deadly rectangle.

Next post is a review of  Berthier’s position on unique rectangles and multiple solutions. In THLS,  UR is in the last, “miscellaneous” chapter and must be applied after regular fish.

On the homework assignment, you were to skip the bv scan methods and go directly to X-panels. I have a particular one for you. 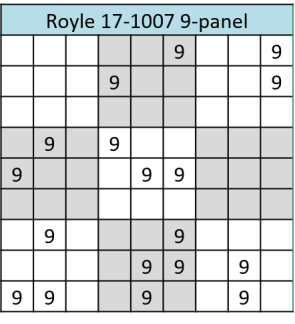 Let’s say you wanted to find every regular fish  on the rows. Suset enumeration does it. Start with a list of Susets, the row number/9 positions along the row. Then build larger susets by taking the union of numbers with the union of positions of every pair of susets. Since there are two blank rows, there is no need to go any further than four positions. Three rows and three positions define a swordfish; four of each, a jellyfish.

See if you can discern the systematic sequence, that skips no possibilities, here:

Less systematically, and less comprehensively, you get there faster making combinations of the lines with the least positions and the most overlap in positions.

Of course, none of this is usually necessary. We can find most fish readily with a blank line tally on the panel. For row fish, mark (-) a set of lines on a blank column in the same direction. Then on a blank line, mark(+) the covered positions(columns). This is done on the left panel below. On the right panel is the blank line tally for the complementary swordfish along columns, that has to be there. 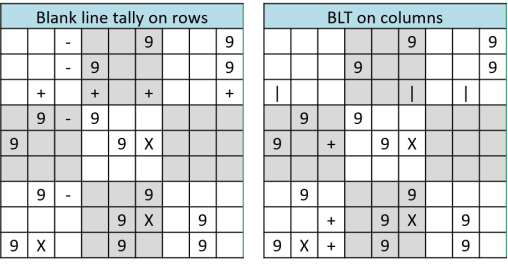 The jelly and swordfish have the same victims. In fact they are subsets of a different form, different views of the same thing, like the complementary naked and hidden subsets of a unit. That is why susets apply equally to both subsets and fish. Regular fish are subsets. 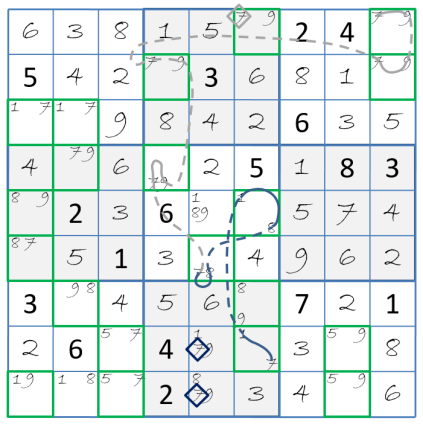 After these removals, the puzzle is finished quickly by an XY wing, extending to a long XY chain wiping out every other 7 and confirming every 9 along the chain.

Although Berthier rates every chain link as an added level of logical complexity, XY chains are extended to such length effortlessly. In fact, it pays to extend XY rails as far as possible, because multiple chains can be systematically whacked out of a common rail curve. Here is the rail underlying the two adjoined chains above.

Now I must confess to the reason for my request that  you skip the bv scan in the Royle 17-1007 in your homework. It is this XY nice loop, found on the same bv map before the SOB calls for X-panels. It removes the same candidates, and destroys the fish, and along with them, the illustration of supersymmetry for which it was chosen.

When I first took up XY chains in Sysudoku, I disputed Denis’ statement that “XY loops are useless”.  Of course this position completely overlooks nice loops like this one, but it comes from the fact that a long chain with a loop can be broken up into shorter chains with the same victims. To Berthier,  longer chains, being of higher logical complexity, are therefore useless.

In the sense of his words, Berthier is right, even here.  The above loop is a series of two XY chains.  But to those not adhering to his unusual definitions of those words, some of his proclamations are ridiculous. More on AIC loops later. 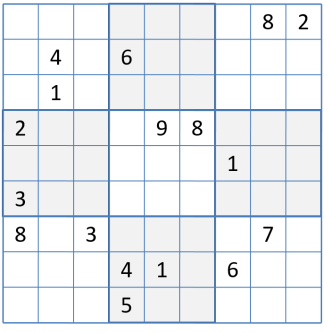 Next we examine the unique rectangle methods Berthier recommends, and his conclusion that they should only be employed as a last resort, because they assume uniqueness. Do you believe that?  Here is Royle 17-692, a puzzle that demonstrates that this conclusion comes with a cost. Maybe you’d like to fill in the candidates, and see what you would do with it, beforehand.