The Limited XYZ-wings of THLS

The XYZ-wing is limited in The Hidden Logic of Sudoku, as it generally is in Sudoku literature, by  a limited conception of the weak link.  This post presents a resolution of Royle 17-12407 using an iXYZ-wing, a form of the XYZ-wing utilizing the forcing chain as a wink, a means of “seeing”. This is one of the puzzles that THLS claims “can only be solved” by hidden logic.

In Sue de Coq’s celebrated post of October 24, 2005, titled  “Two-Sector Disjoint Subsets”, he predicted that the technique he was introducing would soon be forgotten, because Sudoku solving was soon to be dominated by forcing chains. That didn’t happen, but perhaps the viral rush to demonstrate forcing chains as an advanced method explains why they are largely overlooked today as a form of “seeing”, a weak link in which two linked candidates cannot both be true, because if one is true, the other is false.

Sysudoku uses forcing chains as winks interchangeable with winks due to the candidates sharing a unit. The XYZ-wing sparked my interest in forcing chain winks, when I realized how unit shared “seeing” limited the ability of outside candidates to see the three candidates of the wing’s toxic set. Shortly after came the realization that the winks of the wing itself could also be forcing chains. I already had a platform for a focused search for these irregular XYZ-wings , a table of bv cells.

Let’s begin the unhidden conquest of Royle 17-12407 with a checkpoint on its basic solving. A remote pair jumps out of the line marked grid to remove 7 and 9 from r1c8.

The bypass completes the THLS elaboration.  The concentration on numbers 36789 makes box marking and line marking easy, but it creates a host of “almost Sue de Coq” situations. 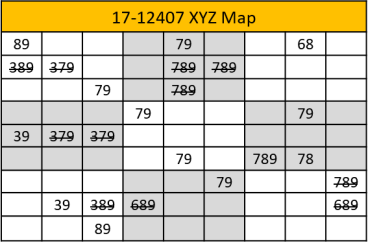 The number concentration also produces a host of potential XYZ-wings. To analyze these, I copy my bv map and add potential XYZ and WXYZ hinge cells. Placing this panel alongside the grid, I look for forcing chain wing attachment and toxic set victims for each hinge cell, crossing out the unsuccessful ones. Here is the resulting XYZ map for 17-12407.

The prize for this systematic search is a gem of an i789-wing, with a remote wing attached by a grouped 8-chain ER.  The single victim, 9r6c8, sees the remote wing 9 via an ER style 9-chain.  What a charmer!

The removal appears to be indecisive, but when we color the 79 slinks we have a grouped blue node of the blue/green cluster that traps a neighboring 7, . . .

expanding the cluster to trap another 7, generating a box/line SE7m removing 7r1c8, which is green, confirming that blue is true, and collapsing Royle 17-12407 immediately.

Now we go to XY-chains, the next topic in THLS and the SOB as well. This covers the XY-wing, the shortest possible XY-chain, but instead of that, we’ll  look at Berthier’s longest XY chain, in Royle 17-35802, to show how the Sudoku XY railway resolves his difficulties with XY loops and “pseudo loops”. As usual, you get a shot at it first.