THLS Needs a Ride on the XY Railway

This post solves an XY-chain example to illustrate the simplicity and efficiency of XY-chains, as opposed to the rule based overcomplicated view of them in The Hidden Logic of Sudoku.

From the first, this Sysudoku blog emphasized the fundamental nature of strong and weak links, and power of alternating them in chains.  XY-chains were introduced as the most productive form of alternating inference chain, or AIC.  A goal of thoroughly exploiting the easily constructed XY-chains led naturally to the idea of an extended network of them, from which every productive XY-chain can be snipped.

The THLS trace of Royle 17-35802 describes it as solved in L6+XY7. The XY-chain is described as seven linked cells. Among Sudoku writers Berthier is the only one to attach such significance to the length of a chain. 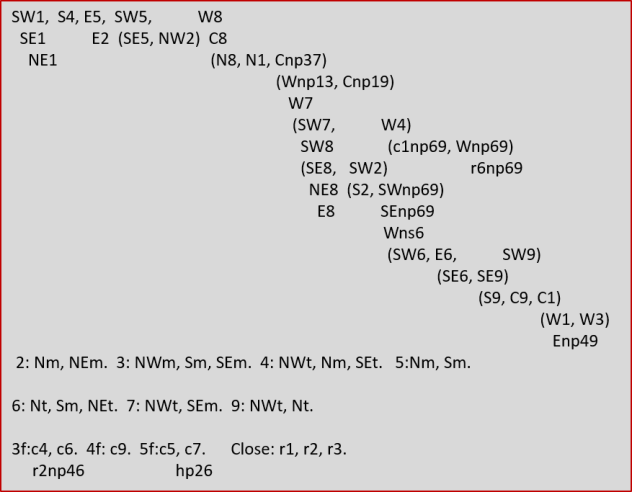 Including the eliminations of the naked pair (black) and the hidden pair (maroon), here is grid on which the only chance for a unique rectangle has just been eliminated.

My record of not finding a Sue de Coq in a THLS Royle 17 remains intact, so we move on to the bv scan.

A rarely seen regular XYZ-wing does show up, a 794-wing.

Now I zoom up on the bv map and draw the XY railway, starting with one long curve for the main line, and adding a few spurs. Stations on the railway are bv.  Starting with 6r3c3, continue on the railway until you find another 6. The first one is 6. If we are leaving the station with 6, it forms a toxic set with the starting 6. But that is not news, is it? At the next matching station we are arriving on 6, but on the next match we do have one of Berthier’s full XY-chains and a toxic set. The trouble is, no victim sees both terminal 6’s. The last 6 is arriving, and the railway is one-way.  We can’t back up to go to more stations

So what next? Advance to the next station, where it is 4 arriving and we traverse the railway looking for leaving 4’s. It turns out that the THLS is found on the main line (black), but we can shorten the path by taking the green connecting spur and bypassing the red one, finishing on the black curve.

Unlike THLS, we regard links between candidates, not cells. XY chains are the simplest form of alternating inference chain, the strong links inside bv, and weak links between. Candidates at the ends of an AIC terminal slinks are strongly linked, and therefore toxic. A candidate seeing both of them is false.

Now is a good time to dispose of an embarrassing THLS proclamation that XY-chains should have no loops. You recently saw a nice loop in action on Royle 17-1007.  On our railway above, we could add a spur leaving r6c6 on 7 and arriving on 7 to r6c5, creating a nice loop. It so happens that all adjacent pairs along this loop are slinks in all of their containing units, but any exception to this would bring an elimination of a candidate seeing both ends of a slink.

The legitimate concern behind the proclamation, to put it simply, is that the railway cannot leave and arrive to the same station.  To illustrate the consequences of doing so, THLS gives the reader one of its most confusing head scratchers, Figure 1 on page 199.

In  his “True XY loop” diagram, Berthier has a bv configation for which the only way to construct an “full” XY chain is to go around a loop and use r4c5 twice, arriving on the rail on which we left. Then on the companion “pseudo XY loop” diagram, the numbers are changed to have an ordinary XY wing joining a perfectly fine nice loop. This kind of loop extension does good service in Sydudoku nice loop coloring. What happened? Good and bad are reversed.

Anyway, we can appreciate the THLS practice of solving with the shortest XY chain along the railway. Curves on the bv map are fun to draw, but the real anatomy of the XY-chain is the AIC diagram on the grid. If you’re up to it, I suggest you find the next two XY-chain eliminations that cook 35802’s goose, and compare your artistic AIC curves to mine in the next post.

Meanwhile, I’d like to illustrate the advantage of opting for coloring when you find yourself in a field of bv clover.

Going back to the railway grid, I had two fine clusters, but they don’t see each other.

But the L7 XY elimination of 4r3c4 extends the red/orange cluster to trap 5r3c5, and wrap red, and then blue, for a complete solution.

Review your coloring and make it happen.

Or maybe you’d rather spend your sysudokie time on basic preview of a supposedly hidden XY chain puzzle to be examined next. It’s Royle 17-7295