This post checkpoints Royle 17-16774, a rare example in The Hidden Logic of Sudoku of conjugacy chains dealing with a monster cloud of candidates. The checkpoint also catches SudoRules dismembering a “useless” XY nice loop that somehow sneaked into THLS.

If you worked on the tough homework, thanks for being sysudokie about it.   We have to defend our turf sometimes, from those who take Sudoku as a challenge for coding, but come to believe they have found in their computer code the zen of human solving. THLS is a concealed form of this, with its unpublished starting gun number scanning and almost as immediate candidate thinning, its burdensome multiple grid maintenance, and its humanly impractical “logical complexity” order of battle. More generally, sysudokies have to resist all manner of reasons for searches for which only a computer has time.

Need a celebration poster? How about this one!

With the toughest two rows to mark, two naked quads show up. I choose to continue on the rows, with the bean pod quad markers left in place.  Berthier reports these beauties as hidden triples, which are “logically” simpler (3 < 4), but require all candidates, besides just being harder to spot.

Any trouble getting there? Welcome to the club. They slipped right by me, at first.  Usually, I show you the results of my back tracking without admitting it. 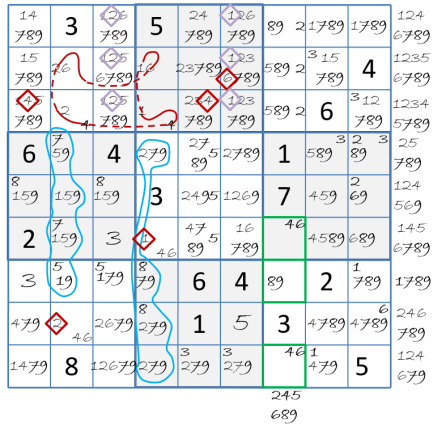 You have to forgive me, however, when you see this picture of the devastation wreaked by this tight little XY nice loop in the space swept by the quads.  In addition to the normal elimination in the lines of each link, weak or strong, there are the two box/lines

So what did SudoRules do with this “useless” nice loop? No worries, actually. The rule based beast found the XY chain surrounding each wink of the nice loop.

They’re always there. That’s why a nice loop works. When it is allowed  to exist, that is. 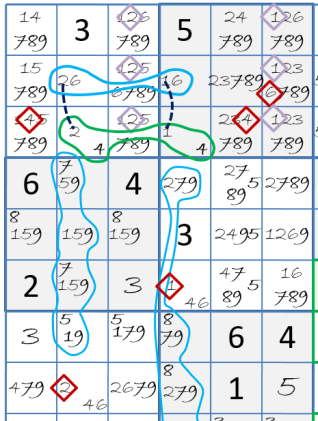 If you’ve found your copy of THLS where it slipped out and landed on the floor beside the bed, then you came upon Denis’  trace error, reporting two XY4 chains instead of three. He did mention the elimination of the missing XY-chain, however, to the consternation of his most diligent readers.

For sysudokies, 16774 just keeps on giving. Gordon Fick noted that the nice loop can be interpreted as a doubly linked ALZ-XZ, with the same toxic sets. The second restricted common locks the two ALS, giving a toxic set for every number. One ALS gets the 1; the other, the 2.

For the record, the basic trace:

The nice loop/ALS-XXZ  leaves it to a couple of c-chain (X-chain) woodsmen to clear cut the forest. The black 4-chain is followed on the X-panels by a red 6-chain. The collapse is triggered by 6r9c7.

My co-conspirator Gordon Fick points out four rarely seen and equally fatal finned fish in  17-16477 on the 4-panel as well.

The panels show the blank line tally markings for two alternate finned fish on the 4-panel, and two more on the 6-panel. As always with finned fish, you should satisfy yourself that there are no kraken victims among them.

Next week begins the examination of Berthier’s modified XY-chains, with the xyt chain. These last two innovative offerings of The Hidden Logic of Sudoku involve a continuing Sysudoku issue, arbitrary guesses in human solving. 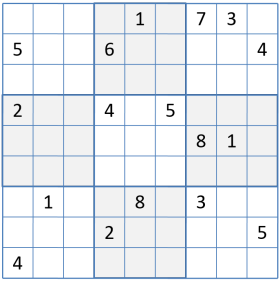 I know your New Year’s resolution was not to do a Royle a week, but  you might like the sysudokie basic on Royle 17-2769, the first xyt chain example in THLS XVII. Just skip the unique rectangle that solves the puzzle before you get to the xyt chain. It assumes you know what.