A Closing ALS Postscript on THLS

This post demonstrates ALS-XZ as an alternative to hidden XY chains, and concludes the review of The Hidden Logic of Sudoku by Denis Berthier.

In THLS, Denis goes outside the Royles 17 collection only a few times for illustrative examples. Sudogen 17-3403 is from a large collection generated by random and analyzed by SudoRules. It was used to compare two “resolution paths”, one with regular xy chains of 7, 8, ,13, 11, and 4 cells, and a hidden XY chain alternative path with chains of four cells, including two XY chains, a hidden XY chain, and an xyt chain. It was selected to thus demonstrate the superior logical simplicity of hidden chains. 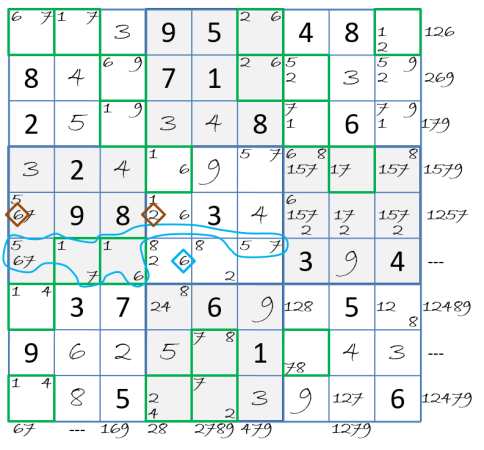 With advanced fireworks to come later, let’s start with a checkpoint of sysudokie basic on 3403. Here is the almost completed line marking grid, with its aligned triple and naked quad induced box/lines.

On reviewing Chapter XIV on XY chains, I passed on the 3403 example, the point of it being the reduced logical complexity of the shorter hidden chain path.

The Sysudoku railway extends XY chains with so little effort that this measure of logical complexity is itself obsolete. There is not rationale here for maintaining and reviewing the extra grids required for hidden chains.

Then I received a New Year email from sysudokie contributor Gordon Fick with the outstanding ALS-XZ of the January 17 post. It was accompanied by Gordon’s findings for 3403, including an ALS toxic set barrage made possible by the bv rich environment of the THLS examples. I decided to include it in the review, to counter the impression that highly complex example might have conveyed about the difficulty of the these examples.

First, there’s an instructive Type 2 UR (see Tools page) that must wait on the THLS last resort tarmac by Berthier decree. 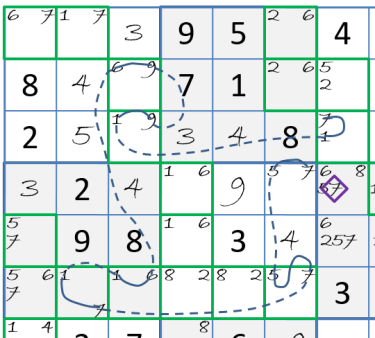 Next is Berthier’s 7-cell XY chain:

and a shortened  version of the  xy13, courtesy of the UR.

In the thinned out grid, ALS master Fick begins to work his magic. 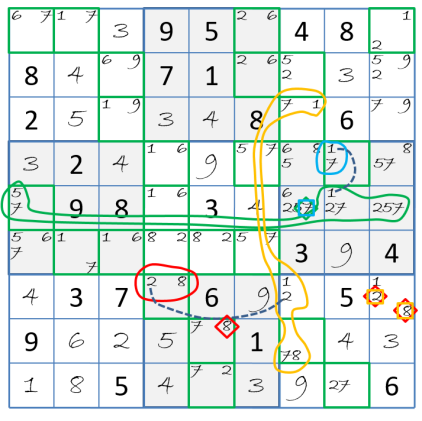 Two more ALS-XZ trigger a precipitous collapse, bypassing the 11 and 4-cell XY chains. The 7 and 8 victims see the toxic set; the 2 victim, the red/orange restricted common.

Or so I thought. Actually we have to deny the red/orange ALZ-XZ that victim. My diligent proofreader, Guenter Todt,  pointed out that the collapse from (Ehs8,Chs8) leaves 2r7c9 as a clue! So what went wrong?

The problem is my mistaken notion (not Gordon’s) that the restricted common candidates of one of the ALS must include the true RC candidate.   Reader Mittleman set me straight on that.  I’ll have to go back and figure out how I argued myself into that one, and what earlier damage that might have done. Guenter also caught my less serious error in leaving out  the 8r8c5 removal.

Just restore 2r7c9 above, and the collapse follows. The size of it is untypical of THLS examples.

Anyway, the point is that  ALS-XZ is a much better investment than hidden logic for the human solver. Now to close this very long review with a summary of its conclusions.

First, I do thank Denis Berthier for The Hidden Logic of Sudoku, a monumental effort bringing AI expertise and scholarly experience to bear in a unique way.  What Denis disclosed of his background and intentions were reported here to establish that this work, while succeeding as an AI project, was not intended as instruction in human Sudoku solving, and doesn’t serve this purpose well. In fact, it was undertaken little regard for practical human solving techniques available at the time.

Also, Berthier was not following the expert system practice of capturing the skills of an expert in a set of rules. Instead, he was expressing his own ill informed expertise in human Sudoku  solving.

THLS directs little attention to basic solving, the derivation of candidates. Its only detailed disclosure was reverse engineered in this review to reveal a rigid algorithmic technique well suited to computer solving, but outstripping human time and patience. Unreasonably, diligent readers of THLS must utilize their own basic technique to follow the “resolution path” traces of THLS examples.

It is ironic also is that most of the solving in in THLS examples  is basic solving. The candidate field generated by these puzzles is generally a simple one, with may binary valued cells.

The primary thesis of THLS, that symmetric versions of the puzzle state offer unique solving techniques unavailable to human solvers on the standard Sudoku number/row/column grid, was thoroughly refuted in this review, using THLS examples.  Mapping of hidden XY chains to AIC in nrc space was demonstrated.  Mappings of regular fish to subsets in Suset space, without symmetry grid maintenance, was also demonstrated, refuting another claim for the necessity of symmetry spaces. Alternative solution paths were displayed in detail for all puzzles selected to support the claim of necessity for hidden logic.

This review recognized THLS xyt and xyzt chains as possible human solving tools. The speculative nature of these chains was noted, but they remain useful as extreme resources. It’s just that a comprehensive exploration of every linked bv pair for a possible “t” chain, while reasonable in a computer solver, is not practical for a human solver.

The xyt and xyzt chains are extensions of XY chains, but the innovative involvement of the starting value and the victim in these techniques actually applies to all AIC types. That is a broad, if seldom needed, avenue available to the human solver, compared to the embedded XY railway offered by THLS.

In my view, Berthier’s effort was very hampered by the commonly held but mistaken notion linking cells by their candidate content, as opposed to linking candidates directly. He missed the general implications of alternating inference chains and the slink network of Medusa coloring. He missed finned and kraken fish, and almost locked sets and their application to toxic set elimination and fishing.  He mixed X-chain grouping.  He missed pattern analysis.

Berthier’s solver, SudoRules, is built on a unique and innovative technology, but it is one of many such systems that depend on the computer’s capacity for searching.  SudoRules does not emulate an expert human solver. It’s actions do not follow resolution paths applying well known humanly practical techniques, as was demonstrated repeatedly in this review. I am thankful to be able to report that THLS does not show that its “hidden logic” is necessary, or even suitable, for human solving of Sudoku puzzles.

Next is a brief review  of a basic solving guide by a fellow engineering retiree, Rick Seemel, titled Sudoku Satisfaction. Rick approaches everything a little differently, and with his own distinctive nomenclature.

Satisfaction comes with a two week collection of puzzles from Rick’s local paper. Does that sound like anybody you know? Think Dave Green. The review solves two puzzles, comparing solving concepts along the way.

Here is the first, a puzzle that Rick uses to introduce Satisfaction techniques. You could have your own box marking ready to compare as we host a tour for Satisfaction readers.  The second post will solve the toughest puzzle in the Satisfaction collection, which goes beyond Sysudoku basic. It will serve to illustrate some techniques that could add advanced Sudoku satisfaction for many of Rick’s readers.

4 Responses to A Closing ALS Postscript on THLS