This post completes the last hour of the Satisfaction Sudoku tour of Sysudoku, with alternative solution paths beyond the bv scan in Saturday 2. It features a finned X-wing, a coloring wrap, and an alternative freeform pattern analysis with a decisive set of four orphans.

As we leave the bv scan floor we generally have two options. If we have a large number of bv cells, we usually go directly to the coloring room. But if not, we stop off here with the X-panel. The X-panel is a set of grids, one for each number, that shows only the grid position of the remaining candidates of that number. It’s where we look for fish and X-chains on each panel.

Fins are spare candidates that spoil the fish, because if the victim of the X-wing is true, there is an extra 1-position for r6. But if the victim “sees” the fin, it is removed nevertheless, because it is true, the spare r6 position is erased along with the fish position.

Seeing the fin is fatal for a finned fish victim. Here the seeing is by virtue of being in the same box. That’s a finned fish. With forcing chains a victim outside of the fin box can possibly see the fin. If so, it’s called a kraken fish. 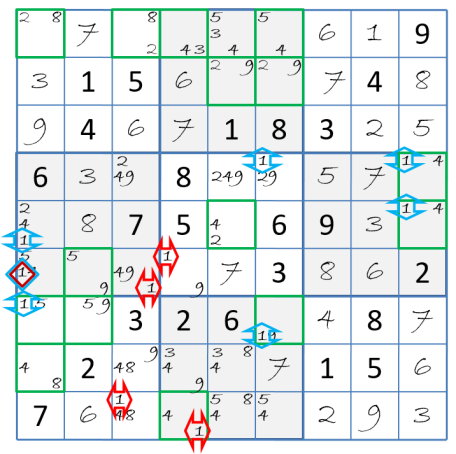 But don’t rock the boat. The finned fish is not the last misfortune to befall Satisfaction 2 out on the lake. The finned 1-wing removal hatches two more fish, an unfinned 1-wing(red) on c3 and c4, and a 1-swordfish(blue) in r4, r5 and r7.  They have the same victim, the former fin.

Now let’s move on down the hall to the coloring room. We tend to come  directly here when there are many bi-value cells. We call them ”bv”, singular or plural.

Coloring is a powerful tool, when the grid is ready. It is an easy and effective way to mark networks of strongly linked candidates, the clusters. At Sysudoku, we use Medusa coloring, the version of coloring that incorporates those slinks between bv partners. You know, the ones that make an XY chain an AIC.  Medusa coloring spreads the slink networks over multiple values.

Candidates of a cluster are marked by one of two colors.  The candidates of one color is true and those of the other color are false. We only have to discover which is which. So what is the catch? It must be hard to do, right?

Wrong. Here is a coloring of Saturday 2, after what’s left of it drags in from the lake. I started with blue on 5r1c5 and then colored 3r1c4, noting that 3r1c5 would be green. Then 4r1c6, because 5r1c6 will be green. Then 5r9c6. Now I fill in those greens, and look for slinks into non bv cells, completing the blue green cluster and using only strong links, exactly two per box or line. Stopped with many bv left uncolored, I dream up two more colors, and start with 5r6c1 red.

Build the cluster carefully, extending it as far as possible, then notice the two red 9’s in r6. In coloring terms, red is wrapped. In r9, true orange means green is false, therefore blue is true. More often, coloring picks off a few candidates before a wrap. The blue diamond eliminations are traps. These are due to seeing both colors of a cluster. Another type of trap is when a candidate finds itsef in a cell with both colors.

Another solving event is a coloring bridge. It occurs when a colors of two clusters see each other, as is the case with orange and green in r9. Orange and green cannot both be true, so logically, one of the opposite colors, red or blue must be true. A trap then occurs when a candidate sees both red and blue. Had that link in r9 been a slink, the two clusters would be merged into one. In Sysudoku, coloring is defined for AIC nice loops, and AIC extensions.

Now for our last stop, let’s take the elevator up to the pattern analysis lab, to see an idea conceived by Andrew Stuart, the author of The Logic of Sudoku, now at work at Sysudoku as a ©PowerPoint weapon . Watch your step there.

We return to Saturday 2 right after line marking, and take another look at the 1-panel. For this demonstration I have to tell you what we mean by a pattern. Some call it a template. A pattern is a set of candidates for a single number with one in every unit lacking a clue (given or uno) of that number. Of course there is one true pattern.

We now know that for every pattern, a freeform can be drawn across the grid touching one of the candidates in every unit that contains any. 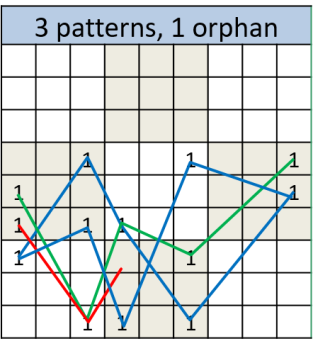 Here is the Saturday 2 1-panel with three freeforms drawn from left to right. Satisfy yourself that the blue and green freeforms do indeed mark patterns. Now comes the challenge. Can you branch away from these patterns to mark another pattern?

When you are satisfied about that, look at the red freeform. It cannot get across c1, because the touching rows are taken. So there are only three patterns. One of them is the true one, and all of its candidates have the same color.  In Sysudoku, we sometimes group patterns to color some of the candidates.

More important there is a candidate through which we can get no left to right freeforms. We call them orphans. They have no patterns to take up for them, and they are removed from the grid.

Now look what would happen if we had this pattern information in the bv scan of the previous post. The Sue de Coq knocked out 1r9c6,  and another 1-candidate would have been orphaned. That’s right, 1r4c3!

Sorry to finish on this sad note, but all good things, in fact, all things, must come to an end. I hope you enjoyed the tour and that we will soon be seeing your questions and comments on Sysudoku posts.

Our next project here is a brief review of a collection of puzzles you might have, Mensa Sudoku by Michael Rios. The review will introduce an extension of the Sysudoku box marking. With this enhancement, the bypass solves every puzzle selected for review. You’ll be surprised how simple it is. 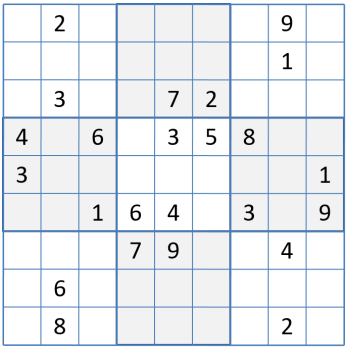 Here is the one I’ll use for the introduction of the bypass 3-fill, Mensa Sudoku 531. Try it on your own, with a trace, then compare with the checkpoint next week

The Satisfaction bus just pulled up. Have a great trip home, and do come back and see us.

4 Responses to More Satisfaction in Saturday 2