A Bypass 3-Fill on the Bus

This post reports an extension of the Sysudoku bypass to include 3-cell fills, and describes the recently republished collection of 534 puzzles, Michael Rios’ Mensa Sudoku, © 2005.

It’s great to take flight, and take in what you can absorb of another culture.  Margie and I recently had that privilege, with Virginia, an accomplished mother hen and lecturer on Mayan history and culture, and Hector, a helpful and confidence inspiring bus driver, on Caravan’s tour of Guatemala. It was a bus sojourn. The country is not that large, but there is a lot of riding time along mountainous roads between stops. And of course, I came armed with the latest Sudoku book, one that popped up on the Barnes and Noble shelf just before the trip. It was Mensa Sudoku, by Michael Rios, and by the same publishers as Peter Gordon’s Puzzlewright Guide to Solving Sudoku, © 2006 Sterling Publishing, under the imprint of Puzzlewright Press. The “Guide” originally was the “Mensa Guide”, but that association was dropped before my confirming review  of Gordon’s solving advice and Frank Longo’s more deserving puzzle collection within it.

As to the possible significance of this, I realized that in the airports, plane and bus, I had slipped into the habit of going for the 3f: (three cell) fills in the bypass, rather than deferring them until line marking. And on this collection at least, this habit paid off handsomely.

Not only that, but I was spotting these line fills quickly with an obvious trick, well suited to the bypass, which I institutionalized immediately with this maroon and grey plaque:

That is quick and simple enough to add to the bypass. I’ll revise earlier posts to do that. This means the 3-fill line joins the wall, the square, and four cornered box as triggers for immediate box marking action. Try it out.

Let’s now have a look at the bypass 3-fill in Mensa 531. You might have started with: 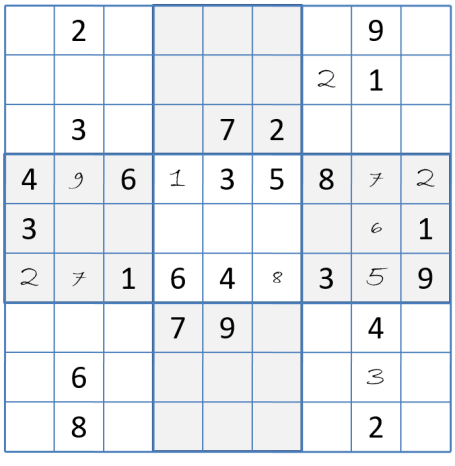 Sweet, but actually, we’ve already missed one. You could go back to r4 as a 3-fill generated by C1 and see how many 3-fills turn up in what could the toughest of the review puzzles.

So, the bottom line is that Michael Rios’ Mensa collection is a basic collection, good for travel, but lacking in advanced challenges. But that’s OK. There’s a time and place for everything. 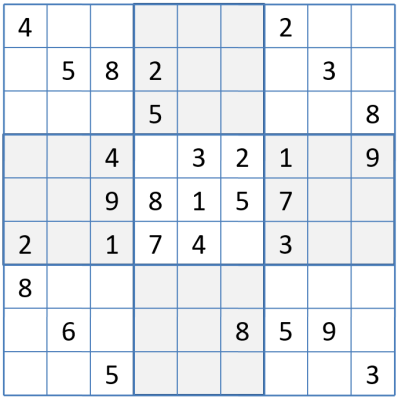 Next week, we begin the review of a collection which may be more like KrazyDad’s SuperTough and Insane collections in stretching Sysudoku principles. It’s one of a number of “very hard level” collections by A.D. Ardson published in 2016. The review posts start with Sudoku Very Hard Puzzles, Volume 2, number 38. Perhaps you’d like to have your implementation of Sysudoku for a checkpoint

I'm John Welch, a retired engineering professor, father of 3 wonderful daughters and granddad to 7 fabulous grandchildren. Sudoku analysis and illustration is a great hobby and a healthy mental challenge.
View all posts by Sudent →
This entry was posted in Puzzle Reviews and tagged Mensa Sudoku, Michael Rios, Sudoku basic 3-fill. Bookmark the permalink.

2 Responses to A Bypass 3-Fill on the Bus