In this post and the next, the first puzzle of the Manuel Castillo Only Extreme Sudoku review, Only Extreme 3,  is taken ahead of the review of his Only Hard Sudoku. The reason is in the title. Rounding out the discussion of AIC slink, here they expand a coloring cluster. It requires the confirmation of their not-both conditions. This turns out to be a task suited to the trial trace developed for Sysudoku monster slaying.

To checkpoint your head start on Only Extreme 3, here is the basic trace and line marked grid. The trace is short because it reflects the help you’re given in basic, which isn’t much. 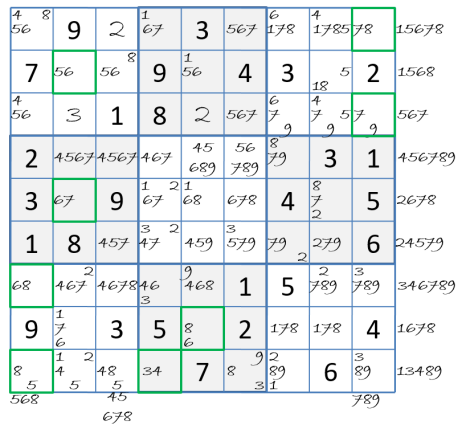 It’s enough to signal that this review is going to be tough. If you didn’t already try it, maybe you’d like to survey the line marked grid to see if you can find something more basic than the bv scan stretch I have for you below.

The bv field being limited and uncoordinated for XY-chains, I worked extra hard for XYZ-wings, and found this i786-wing:  one wing is attached to the hinge by a grouped 8-chain wink. The victim sees that wing’s Z=6 by forcing chain, or if you prefer, ER.

The X-panels were very imbalanced, but I closed one side of a skyscraper with a 1-slink for a productive AIC nice loop.

These removals allowed me two more nibbles, a finned 5-wing and a 4-chain ANL.

Now there seems to be enough coloring action among the 1’s, and the dead 4-wing to get something going. Two AIC slinks are in position to expand the blue/green cluster.  In each case, the uncolored slink partner colors differently, depending on the not-both condition. 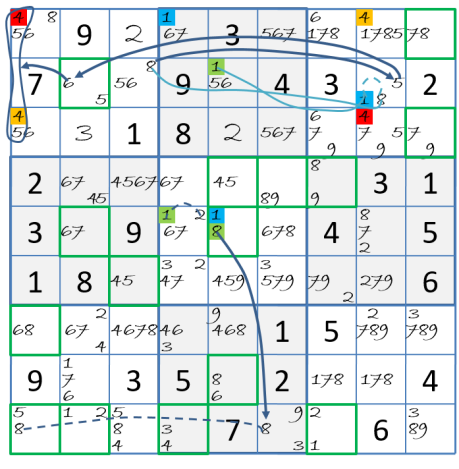 Testing the not-both for the aqua slink, the trial trace reveals that if 8r2c3 and 1r2c5 are both true, no only is green confirmed, but two 5’s are forced into r1. The arrows show the direct paths to this conflict. With not-both the cluster expands, trapping 5r2c8.

After the cluster expands to the 8’s of the North bank, 8r9c3 traps itself by  finding a way to see the green 8r5c5, as well as the newly colored blue 8 in c3.

After the naked pair c3np45, there is a 5-wing, and some further cluster expansion to do.

Want to take charge? Take over with the  not-both test of the burgundy AIC slink, and compare with my continuation next week.