The review of Castillo’s Only Extreme collection continues with Only Extreme 46.  A very extensive bypass is survived, to leave very little to add in box marking, and an interesting line marking.  The rest is murder by the usual suspects in the Sysudoku bv scan.

Line marking is less routine, as in marking r8, a naked pair emerges to remove a candidate placed by a previously marked line, c3.

The play by play is recorded on the basic trace: 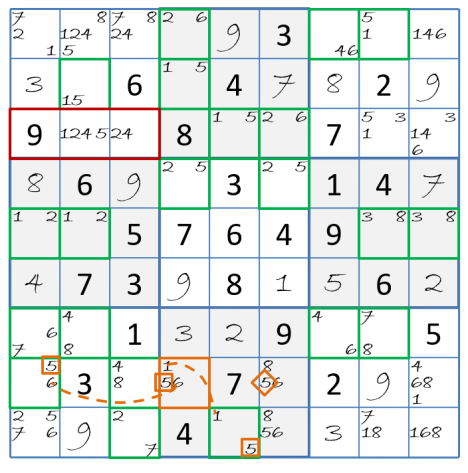 A regular 165-wing is first. Regular wings are rare, with wings attached by a simple weak link, and a victim seeing the toxic set (small squares) of Z = 5 by unit winks.

There is also a single alternate Sue de Coq, with chute NWr3 contents described  as NWr3 = 9(1+5)(2+4) +9(np24). The last term accounts for the restricting pair of (1+5) being absent. Let’s defer the  trial of this term,  giving Only Extreme 46 a chance to be solved by less extreme methods.

The XY rail on the bv map is next.  Start with a long almost nice loop, now in red, but then notice a spur connecting two stations for a nice loop, now in black. Nice indeed, with four of the links making removals. Then  add the ANL links back in as extensions.

Worth noting is, constructing the rail beats searching the raw grid. Less effort, the rail almost drawing itself on the bv map.  Better spotting, the rail being the essential context focusing attention. Isn’t everybody doing the XY rail by now?

The collapse begins with an XY “question mark”, another extension of the nice loop above.  Starting with (C5, C2) we never get back to C2.

It was fun, but nothing really extreme here.

Next post is a meet up with Only Extreme 89, the next 43 puzzle hop over the Only Extremes.