This is another Sysudoku analysis of the championship puzzle of the Sudoku tournament put on by the Akron-Summit Public Library. It’s an annual tournament of four rounds, the last being a three person solve – off on poster board grids, participants in earlier rounds of 3, 2, and 1 puzzles looking on. All four rounds were 20 minute solving sessions. The puzzles are unidentified selections from Will Shortz books, with his kind permission.

This walkthrough Sysudoku analysis of the final round puzzle is especially for the 2017 tournament participants like me, who were bumfuzzled by it on Saturday.

Here is the grid after the first stage of Sysudoku basic reaches a second 3-fill. That’s three unresolved cells in a line or box. The first one is resolved. The second is not, so a line marking fill string is left a reminder

To accurately follow the basic steps, mark them on a fresh grid, as you follow the traces.

Here is the first trace. Read from left to right, but also down the cause-and-effects steps. Multiple effects are lists inside (). Brackets {} mark 3-fills. The first one is resolved, but we’ve gotten to the N7 effects only.

On the grid, we have arrived at a second 3-fill, in c1. I’m looking for two of 1, 2 and 6 clues seeing a cell, one number seeing two cells. It doesn’t happen, so I leave the fill string, and move on.

The bypass trace ends with C7 on the top line, and another unresolved 3-fill to fill 1, 6, 9 into c6. The full name is the slink marking bypass. What it bypasses is the writing down of strong links that are used to generate the clues we have written in. 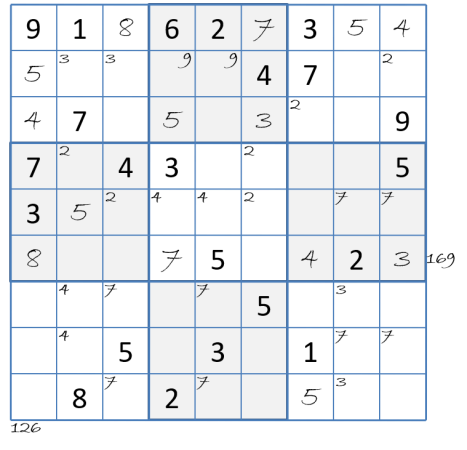 Now we write down the box slinks and wall triples to complete box marking. Here you see what they are.

Box slinks are exactly two candidates of the same value in a box. Why write them down now? Because strong links are central to advanced methods. We add line slinks later, but box slinks are distinguished by marking them in the top of the cell. Pencil marks are spaced on my grid template to allow three. I’ve never needed more.

I trace box marking as number labeled lists, and generate them 1 through 9. For comparing your lists with mine, attack boxes in left to right, then top down, order.

Effects of a marking are indented below, and may include clues and slinks of other numbers.

Line slinks and all remaining candidates are added in the third stage of Sysudoku basic, the line marking. Cells are marked one line at a time, in increasing order of free cells. A free cell of a line is one not resolved as a clue or a member of a closed subset.

Naturally, we start with three free cells, the unresolved 3-fills. In r6 we marked a bv and 1-slink. In c1, the line slinks are box slinks. They actually preclude other 1 and 2-candidates in the SW box, because of their required presence in c1. That’s a box/line.  I mark them as a naked triple to keep from adding them to SW as I line mark five other lines. This leaves only 3 and 9 missing in the box. 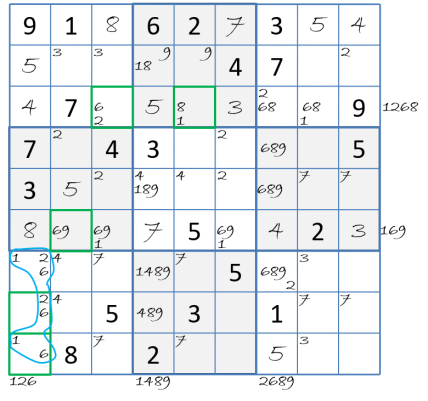 Next is a list of 4-fills. On r3, I make up 1268 as a fill string of numbers missing from at least one box segment, and copy it into each cell. Deleting numbers seeing the true number in a box or column. What’s left goes into the middle line of the cell. When the line is filled, I check the fill string numbers for slinks, and reposition slink partners not in box slinks to the bottom left corner. 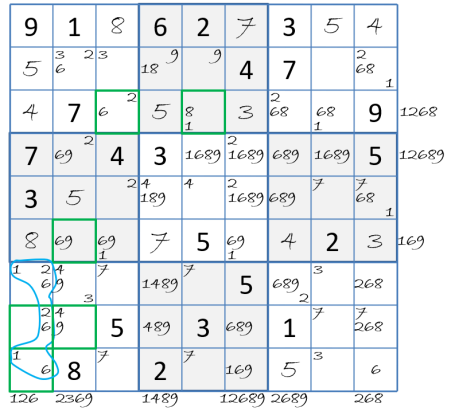 In the 5-fills, the naked triple limits 2 and 6 placements in c2. We’re on the watch for matching slinks on parallel lines, to catch X-wings. In c9, I cut my fill string to 268 by spotting the 1-slink, and the 7 box slinks. The 7 slinks are there, in c8 and c9, but amount to a dead 7-wing. I’m rewarded by a naked single.

The detailed marking of the naked single is where you need to follow the trace to see how it guides the marking process to leave nothing out. 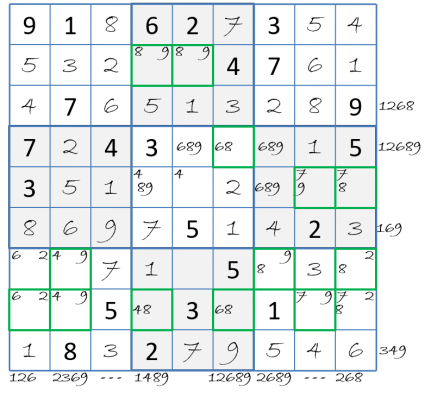 Of course, this careful processing is as unsuited to a speed contest as it is necessary for our task here, rating a puzzle against a prescribed order of battle. 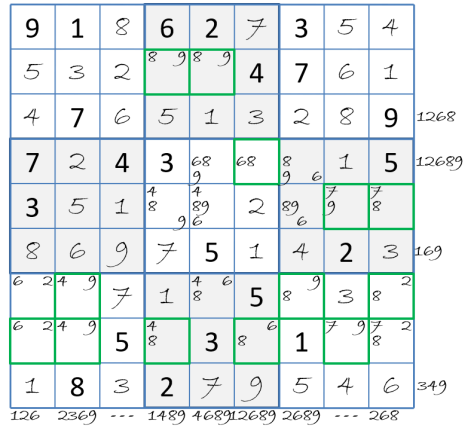 We have one column to fill, as opposed to three rows, so we choose the column, but that does not finish line marking. We still have to carry out the marking of row slinks, and the checking for matching slinks defining X-wings. Of course, we have been checking for subsets as lines and boxes get fully marked. Championship 2017 has made it to Sysudoku advanced.

That starts with a check of aligned bv for unique rectangles. Then it’s a quick check for Sue de Coq or APE. Quick because the cupboard is bare. 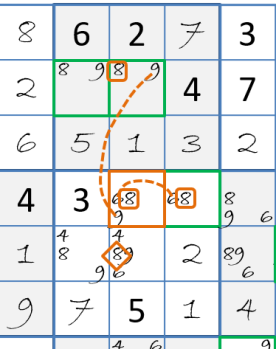 But there are plenty of bv and three value cells, and a systematic search uncovers a regular 698-wing. The victim 8r5c5 is removed because it sees the toxic set of 8’s in the XYZ hinge and the XZ and YZ wings.

In Sysudoku, weak links are marked with dashes; removals, by diamonds. In a weak link, if one partner is true, the other partner is false. In the wing, one of the toxic 8’s has to be true. An outsider 8 seeing all three is toast.

I use a visual aid to look for XYZ-wings. Here is my XYZ map after the search. To the bv map, which is for enumerating XY-chains, I add 3 and 4-value cells with XYZ and WXYZ wings. The hinges without connected wings or without victims are crossed out. Note the 489 hinge not crossed out.

It leads to this wild picture, an irregular 498-wing. I claim the irregular XYZ, or iXYZ, as an Akron innovation made practical by the XYZ map. The wing is irregular when attaching winks of one or both wings are ER or forcing chain weak links. Here, the 9-wink of the 98 wing is a grouped 9-chain. This one has an irregular victim, seeing one of the toxic 8’s (the hinge 8) by a grouped 8-chain 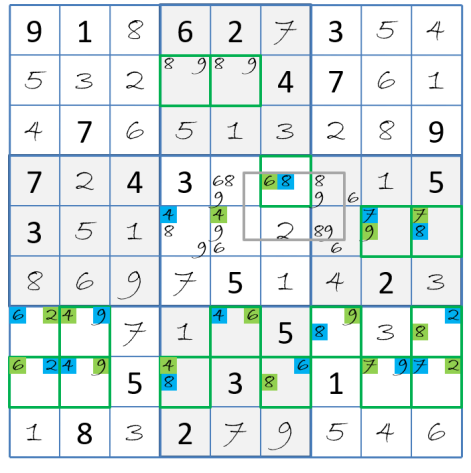 The removal of the i498-wing is decisive. When I get to coloring after finding no fish or X-chains on my X-panels, the removal creates the 8-slink in r8 that completes this cluster.

The power of Medusa coloring is well illustrated here. Either the blue or the green army is true. The grey square marks a unique rectangle in the center bank. Blue forces 69 in all four corners, an obvious double solution. It is too late to reject blue for this reason, because the double solution is completed. And green gives a third solution. 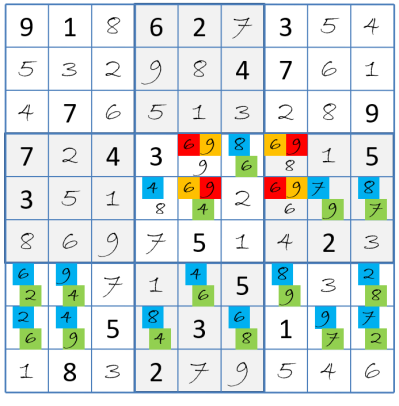 In 2017 Sysudoku demonstrated another possibility. Computer solvers, by ignoring the slink and coloring networks used in this derivation, can reveal additional solutions not derivable by these fundamental forms of logic.

Congrats to Deb, assistants and participants for a fun event.

OK, regular readers, we now return to our normal broadcast, and the case of Manuel Castillo’s Only Extreme 218.