Only Extreme 390 – a Fitting Finale

In this post, the last preselected Sudoku of the review, Only Extreme 390, is solved by only advanced methods, but by an extremely thin margin.  The first crack in the armor is an irregular XYZ-wing. At first I missed an XY-chain ANL on a very extensive XY railway, that expands into a decisive nice loop. The railway is included so you can trace around it to verify the ANL and see if I missed any others.  I had solved 390 with a coloring trial, which would rate it as Sysudoku Extreme. After the ANL, however,  the expanded cluster merges with a second cluster for a follow-up wrap. A review table and general conclusions on Only Extreme Sudoku end the post.

As for Only Extreme 390, here is a basic trace that carries you to the first grid: 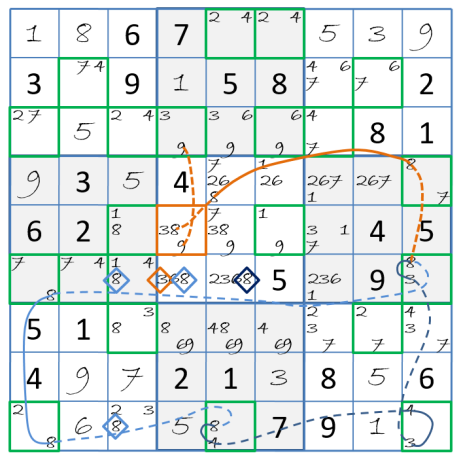 In the  irregular 893-wing, the 83 wing winks at the hinge via a forcing chain. The almost nice XY loop (black) removes one 8, but then an 8-slink  in c1 winks in to the chain terminals to form an AIC nice loop, duplicating that removal and adding three more.

To practice the Sysudoku search for ANL along the XY railway superimposed on the bv map, here is the 390 example.  Find all of the starting terminals, and on each unvisited terminal follow the chain. On each incoming  digit, test each repeated outgoing digit along the railway but not in the same unit, for an almost nice loop victim. It’s faster than it sounds. Some segments are one-way. That’s why it’s called a railway.

Powerful as it is, the railway exploits only one feature of the bv field. A more powerful , but still only advanced feature is the Medusa coloring network that the bv field supports. After giving single value X-chains and cross unit fishing restrictions their due diligence, as we did here, the Sysudoku Order of Battle returns to coloring. The blue/green cluster traps three candidates.

A second cluster brings a merge:

Not(blue & orange) and not green & red makes red function as blue and orange function as green. 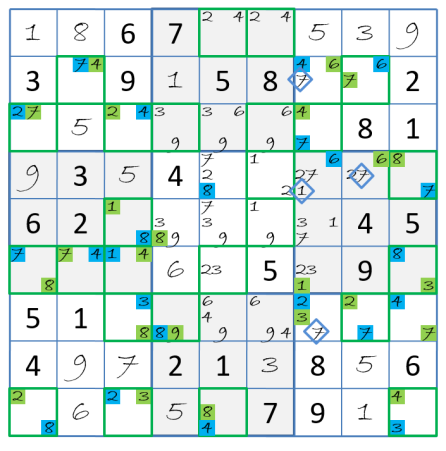 Nothing changes when we merge the two clusters, but the traps of the bridge are exposed.

The marking confirms green, and 390 is done.

Overall, Manuel Castillo’s Only Extreme Sudoku shares with Krazy Dad Insane the honor of being the hardest reviewed here, outside of acknowledged monsters. As to the “Extreme” label , the Sysudoku “extreme” rating is reserved for necessary trials.  Among the 10 selected, Only Extreme had 5 extremes, and 5 only advanced. That’s equal to KD’s Insane’s. That collection t forced me into the effective freeform approach to pattern analysis. Only Extreme Sudoku forced me into series of trials extending a coloring  over AIC slinks.

The Weekly  Extreme Competition series I selected for review had 7 of 10 extremes, but there, in consideration of the by week deadline of the competition, I took the first trial opportunity presented. Advanced alternatives were probably available. Outside of that, my position is to defer, and often discard, trials. Thanks, Gordon.