Moito’s I-4 Inspires a Trace Refinement

This post introduces an improved trace convention for 3-fills, in response to a complex of 3-fills in the bypass solution of Very Hard I-4 from Moito’s Sudoku Road to Mastery, the puzzle Moito rates as highest possible difficulty. The bypass solution demonstrates a tracing refinement for the newest addition to Sysudoku Basic, the 3-fill. Then we watch X-panel methods cooperate with a coloring cluster with a decisive wrap generated by finned fish.

Here is a I-4 bypass trace, as you might have done it by following the examples since  3-fills were introduced last April. Spotting the naked pair SW28, this trace goes into a collapse before the customary number list of first causes begins.

The Traces page and the Basic pages explain the trace notation, in which 3-fills are represented implicitly as effect lists. Now with some experience with the complications of 3-fill interaction, I’m going with a more explicit and simpler tracking of 3-fills in traces. Instead of resolving some 3-fills immediately and leaving unresolved ones unaccounted for, I will list every 3-fill in an unresolved bracketed list form as an effect, and use square brackets to mark its 3-fill resolution list, wherever that occurs, as an effect of whatever cause resolves it.

With this treatment, I can consistently list the four 3-fills in the starting grid of Very Hard I-4, just as I listed the SW28 subset, before starting the numbered cause list. 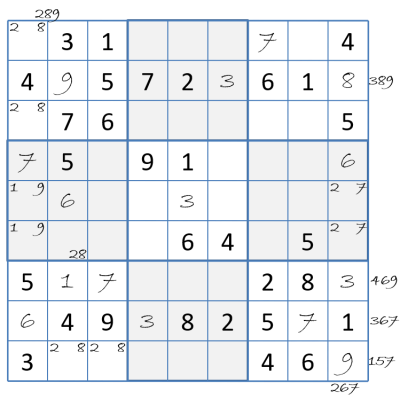 The total effects of these causes are seen here. Then, as the trace continues above,  the hidden dublex finishes the puzzle before numbered causes even begin.

That makes the super tough I-4 look super easy on the order of battle scale. 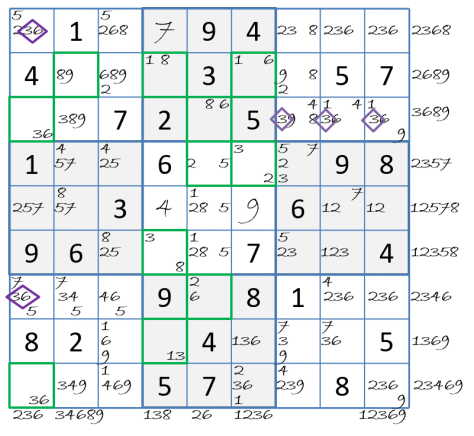 Now I’d like to comment on the interesting solution path of Very Hard I-35. Here is the fully line marked grid, with the scars of the  boxline event of column 1 still in place.

The removals leave a 3-slink in NW,

but we call it a boxline because it’s the removal of the last 3 in the NWr3 box remainder that creates that slink.

The seldom seen regular XYZ-wing is first, but a search for irregular wings on the new 236-wing hinge calls attention to the slink network around these numbers, and I get out the crayons for a look.

A nice cluster develops, but no results, so I go to the X-panel and find 6-chain ANL, expanding the cluster and the bv field. One of the removals traps a 3 in c6.

Coloring early pays dividends, and the cluster coloring has no adverse effect on chain construction. And its easy to do. 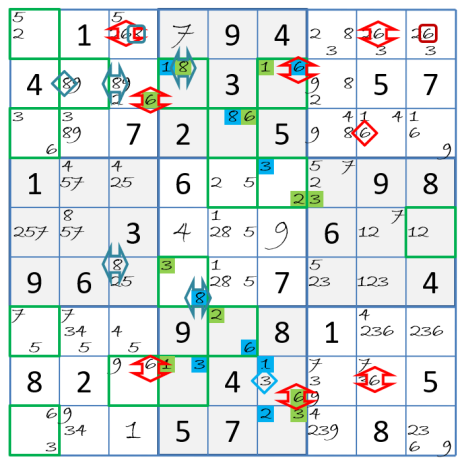 The same 6-panel delivers a  finned swordfish on rows 1,2 and 8. If the fin 6r1c9 is false, the perfect swordfish gobbles up the victim.  But if true, the fin does the gobbling. Seeing the fin is fatal.

Of course, I look at the other potential victim, 6r7c2. Is there any way it can see the fin, and become a kraken fish victim? That is a fine reason to look for an AIC, but it doesn’t work.

Next, we take up a very unusual multiple solution puzzle, Moito Road to Mastery Very Hard IV-6. This one plays like a unique solution Sudoku, until it doesn’t, so you may prefer to avoid it.  In this review, are you a player, or a spectator?