How Not to Find a Multiple on Moito’s Road

After a jaw dropping irregular XYZ-wing, a marking mistake reveals an unavoidable UR and two solutions of Very Hard IV-6, then the correction leads to an even more remarkable, but no less unavoidable uniqueness violation. Coloring reveals the logical path to all four solutions, no errors required. 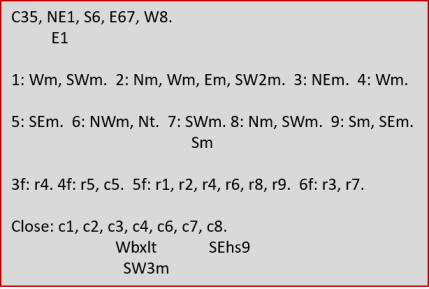 In Sysudoku Basic, a very stingy bypass and a routine box marking lead to a demanding line marking. It was tough, but our reward is an irregular XYZ for the trophy case. 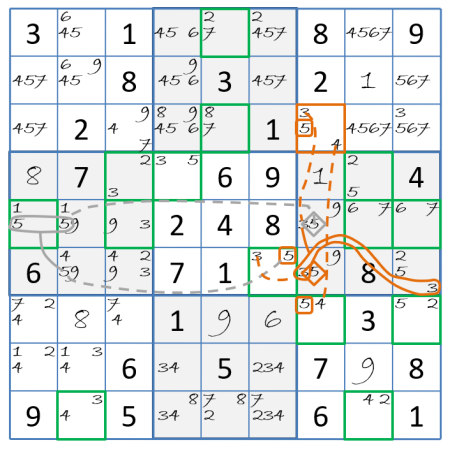 The hinge of the 345-wing is r3c7. The 45 regular wing is attached in the . . . , well, regular way. The 35 weak link is a grouped 3-chain. The 5r6c7 removal is regular, its winks to the square marked toxic set, being unit weak links. The 5r6c7 sees the irregularly attached Z through a grouped 5-chain.

Have to ask how such a crazy wing is ever spotted?  It becomes possible with the XYZ Map, a derivative of the bv map. The map is where you can view all the XYZ-wing ingredients and examine the grid for the enabling AIC. 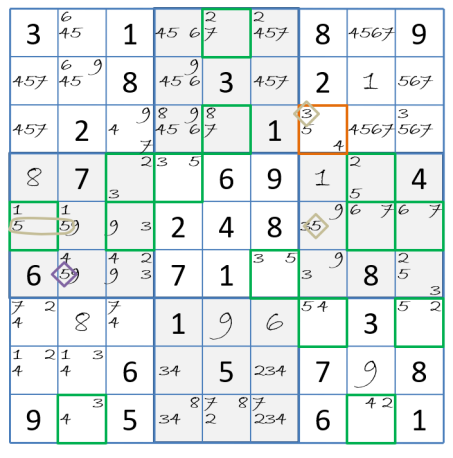 What happens next is embarrassing to admit, but is one of my more instructive mistakes.  I follow the two effects of the irregular removal, the 3r3c3 removal by the disrobed pair c7np39, and the boxline Wbxl5m removal of 5r6c2. But somehow I miss 5r5c2 and take the removal as a boxline, removing two 5’s to produce NW47.

A quick collapse came to a very strange end, when I reached a deadly rectangle on the very last removal. No chance to identify a preventing action.

Then a check with Moito’s IV-6 solution matched neither of these two. 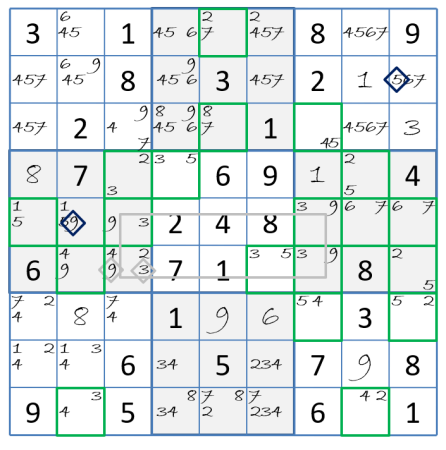 Going back to the boxline removal above, and scratching my head over its mistaken effect, I had a much better alternative, a double Type 1 UR. Sorry, extra candidates are in one corner, and it must be reserved for one of them. Rectangle candidates are asked to leave quietly.

OK, back on track, and knowing we have a multiple, we naturally go to our customary multiple tracking bloodhound,  the coloring trials.

The green trial gives us a 6-node remote pair loop. Like the earlier deadly rectangle, it arrives too late to be avoided at the puzzle’s expense. Moito’s solution is the orange side.

Like too many composers, Moito doesn’t run its solver long enough to avoid multiples.

I was a little surprised to find that blue is just as decisive, and leads to the deadly rectangle I encountered first. That means there are exactly four logically derivable solutions. Does your favorite solver agree? If not, I’d like to know.

This is the first time I’ve seen a UR multiple solution formations turn up with all other placements decided. The occurrence doesn’t affect the dispute  I have with the UR detractors who say that use of UR is an additional assumption of uniqueness that we should not make. It is not that. It is nothing more than a belief that the puzzle was published with adequate processing and rudimentary proof reading.

Suppose the remote pair loop or the UR had occurred earlier, and we took avoiding action, then became stuck. That would have proved nothing, because, what can you expect from a known multiple? It has already given up claim to the rules of Sudoku.

Next time, the review continues with a walk through of Moito Very Hard III-15, shown here. It’s another example of coloring/ X-panel cooperation.