The review of Moito’s Road to Mastery Sudoku continues with another example of early coloring and its cooperative interactions with the X-panel. The advanced path is similar to that of Very Hard I-35 two posts back, but this time coloring dominates the action.

When a first cluster stalls, a second one bids for attention by completely coloring the 8-panel, and delivers a column of traps.  Very Hard III-15 toughs it out as this dominant cluster grows, merging with its stalled predecessor. Finally,  the wrap of a third cluster chooses a side and its over. Sideshows to this drama are an irregular XYZ-wing and a finned X-wing that traps its own fin.

The bypass starts with a 3-fill, but then succeeds only in closing out the 9 placements. With one exception we’ve noted, Moito’s yield very little in the bypass, but tend to give up plenty of bv in basic. 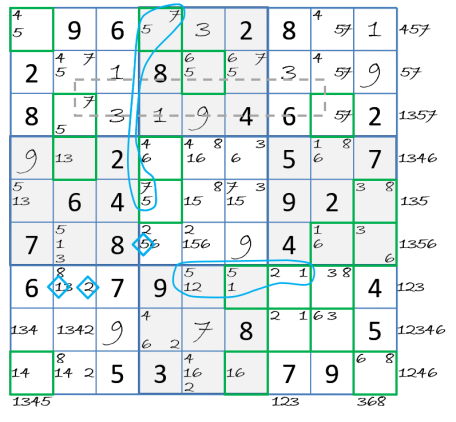 A potential 57 UR in the North bank is prevented when the 4’s insist on a place in one of the roof corners. A second possible UR is erased by the r7 naked triple.

Next, the XYZ map reveals an irregular 675-wing. The 75 wing is attached with an 7-chain, in which two slinks function as winks for the team. 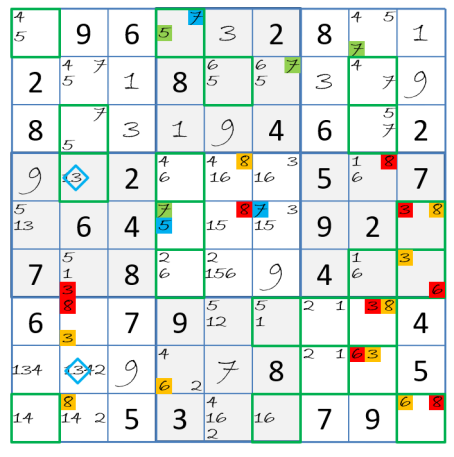 As Very Hard I-35 suggested, it’s a good idea to start coloring clusters when bv are abundant. On the ©PowerPoint grid template they don’t interfere and later unrelated removals can bring traps or wraps in the clusters.

The finned 6-wing removes 6r4c4, making 4r5c4 and 6r4c4 red, trapping the 6-wing’s fin, 6r6c4. That’s the advantage of having a coloring network in place. And it is so easily done.

One more trap and we are dangerously close to a BUG, a double solution certified by unanimous bv.

While Moito’s Road to Mastery is not consistently advanced in practice, or in protection from multiples, it has provided many entertaining challenges. I think it deserves to finish out the January posts. So let’s do Very Hard III-34 next time.

The Guide pages now cover Sysudoku Basic. If you’re a beginner, it’s all you need for know, for now.

Stay tuned, the Sysudoku Advanced header page is completed. The Unique Rectangles methods page  is next.