This post begins a brief review of A.D. Ardson’s Sudoku Diabolical, with a review table and analysis of the first of a pre-selected series 30, 70, . . . , 390. Ardson’s Sudoku Very Hard Puzzles, volume 2, very similar in format, was reviewed in April through July of 2017.

In comparison to Very Hard v.2, Ardson’s Diabolical v.2 appears from my sample to be less consistent, and certainly not more diabolical. Four of ten collapse in basic, two in the bypass.  Among the advanced level puzzles, a generous bv field invites coloring, and with consistent success. 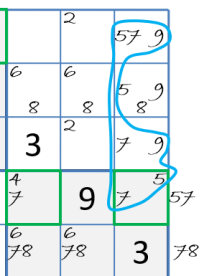 Your homework, Dbv1 30, got the Diabolical review off to a good start with me. The 3-fills made a big splash in the bypass, and line marking featured a nice naked triple, and an 8-wing at the end of the close.

The 8-wing in two columns is not available until all rows are marked. It is spotted in closing as the c7 8-slink gets marked, and the other columns are scanned for a matching slink. It’s a sysudokie bonus of line marking

Besides coloring, another benefit of a generous bv field is an extensive XY railway. Here, three XY chains yield five almost nice loops (ANL), one for each victim.

After this, there is not much for the X-panels to work on. 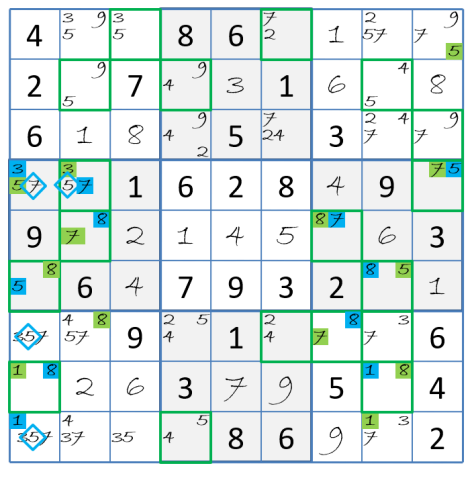 But coloring is well supported, and the first cluster has four traps. Among them, the 5r7c1 removal creates r7np37, removing a green 7, wrapping green. 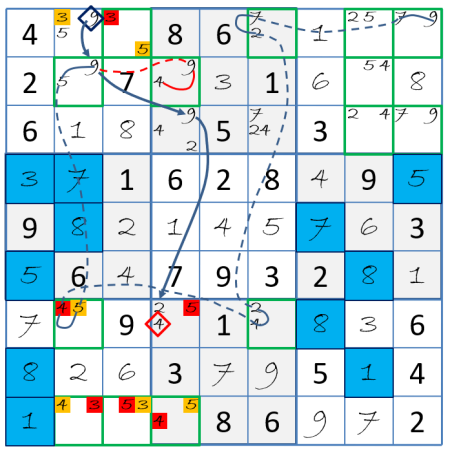 As blue dominated dbv1 30 fights on, a new cluster is added. The modified XY railway nets two ANL to  wrap red, for the orange finish.

Next, a trace of the bypass collapse of Sudoku Diabolical 350, a showpiece for the 3-fill.

Try it out. The starting grid is at the end of the Guide page Begin with the Bypass.

The Diabolical review will conclude with a full report on dbv1 310. Shown here. You have two weeks to mull it over, then compare details.