This post fleshes out the review table entry, and checkpoints the two week homework assignment of the Ardson Sudoku Diabolical v.1. The early coloring typical of the review is helpful, but not decisive.

In the bypass, the 3-fill menace is resisted, and there are two very unsystematic hidden singles you are forgiven for missing, 4r4c3 and 8r4c7. You may be mystified until you see the causes in the trace. Now I don’t know how I spotted them.

The remainder of basic is routine.

With no grid scanning prospects, the North bank bv field looks ripe for coloring.  A cluster is started, yielding a trap that nets naked pair N15, expanding the cluster.

To follow up on that, I added two more limited clusters, but return to systematic city with the XYZ map 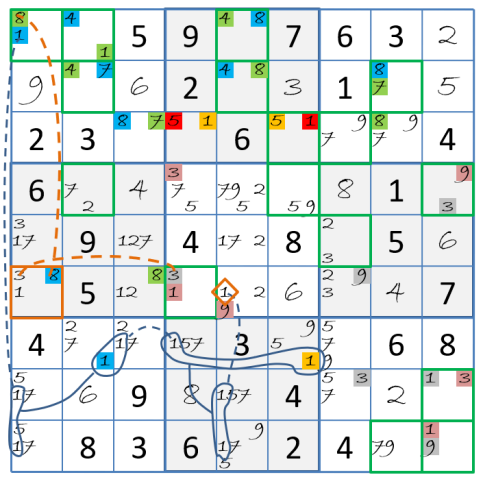 A right angle XYZ is usually useless, but this 381-wing shows that in the AIC seeing world, the right angle is a plan for a construction project. Just look for a potential victim seeing two Z’s, and see if it can possibly see the third one.

You’d never search for such an AIC without a specific target. 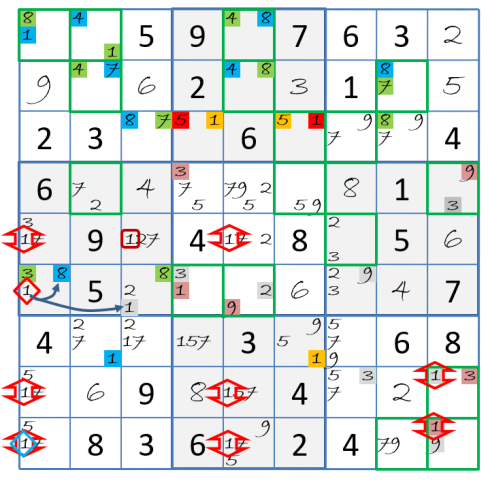 On the 1-panel , a finned swordfish extends blue/green, and sets up a coloring bridge. In r6c3,

. . . into the South box, where another bridge emerges:

not(grey and orange) =>maroon or red 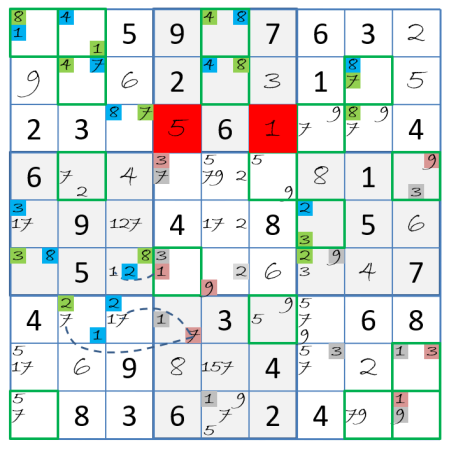 The resulting maroon/grey expansion wraps grey in the South box.

That pretty much wraps up Diabolical 310 and the review. If it really takes the irregular 381-wing, the finned swordfish and the multiple wraps, I’ll concede that diabolical puzzles can be found in A.D. Ardson’s Sudoku Diabolical v.1 . 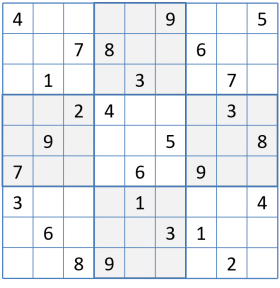 Next, we detail the solution path for the 2/04/18 Sudoku in my TV Times magazine. It’s basic level, but may have generated complaints from readers unable to get a toe hold on a Sudoku they are accustomed to solving. For me, box marking revealed two inferences it takes a more talented  sysudokie to spot in the bypass. Are you one of those?