Bean Gets No Second Extreme

This post describes how I-41, in Extremely Hard v. 10 by Rebecca Bean comes close, but fails to force a deferred Single Alternate Sue de Coq trial. It does force a review of AIC hinges and grouped forcing chains. An update provides a Gordon Fick example of ALS_XZ and the BARN.

Here is the basic trace. These are always displayed with analyzed puzzles, to vet the basic solving  behind the candidates. 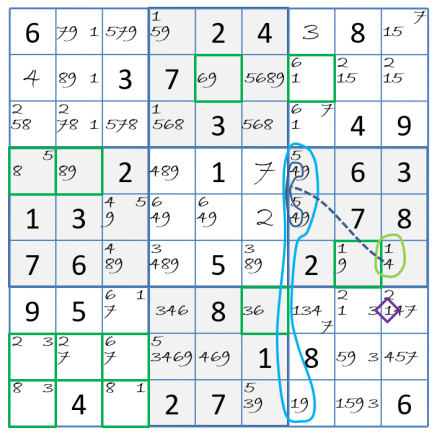 In the original post, my Canadian co-hort Gordon Fick found this classic ALS_XZ. A grouped restricted common enables 1r7c9 to see all 1’s in both green and blue ALS.

Gordon noted that the other participating bv, could be the ALS partner in another ALS_XZ.

Want to figure that out? I’ll reveal it at the end of this updated post. 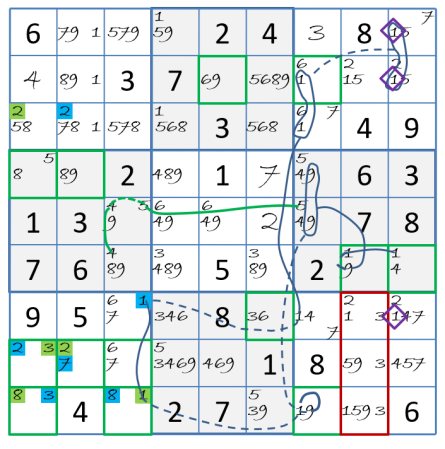 The first advanced method I found is an AIC almost nice loop eliminating 1r7c9. The AIC hinges are left on the grid, even though they weren’t involved in the ANL.

The SASdC chute SEr8 is left in case it is needed later. On my first pass on I-41 it was. The test of a 1 and 9 missing failed, and the Sue de Coq removed 1r2c8 and 1r7c7 as well as 1r7c9. But these removals were indecisive.

It was only when I returned to write up this post did I realize that having one member of the ANL toxic set in a cluster is a lead worth investigating further. What would you do with it?

Well, first I noted that any 1 seeing 1r6c9 and any blue candidate is eliminated.  Then I started looking at forcing chains starting on any other 1’s in c9. That led to the grouped 1- chain to the blue terminal that makes the NE 1-group a victim. 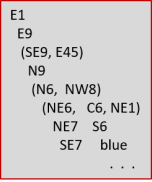 The collapse confirms blue, and since the SASdC was not required, it holds volume 10 of Rebecca Bean Extremely Hard to one Sysudoku “extreme”. 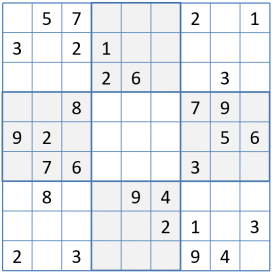 Next week, the review is concluded with a few unreported highlights, starting with IV-12 here. Come prepared with your basic trace.

After that, the plan is to post several reports on the development activity on the  Sysudokie Guide, a set of pages on Sysudoku methods and related issues. The Guide is accessed via the menu bar above.

Now about Gordon’s other ALS in Bean’s Extremely Hard I-41. Another grouped restricted common is the key. If any candidate could see all the 4’s, it would go, as well. 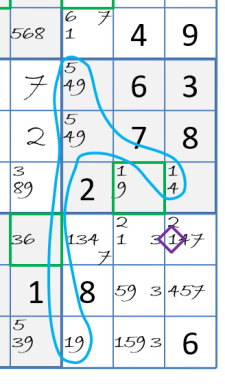 But you know, I also missed a BARN, a bent almost restricted n-set, in this case a 4-set. Only the 1’s are “bent” in the bent region Ec7. A BARN is a spotting signpost for a bent n-set type 1, or BNS1. Here, 1 is the only common value in the bent region remainders.