A WXYZ vs. BARN Settlement

In this post, progress is reported on the Sysudoku Guide, and on  a possible territorial agreement between the WXYZ wing and the Bent family.

The Guide, that link up there on the menu bar, is taken shape. The Basic pages are complete, with all the elements of Sysudoku Basic explained and demonstrated. That includes the bypass, 3-fills, slink marking, box making, line marking, subsets, and box/lines.  On the Advanced Side, there are pages now on unique rectangles,  Sue de Coq, APE, Bent n-sets, ALS toxic sets and XYZ-wings.

That advanced sequence may not fit your order of battle, but it is meant to delay the construction of visual aids until they are needed.  With XYZ Wings, the sysudokie beginner encounters the first of these, the XYZ map. Later will come aids for XY chains, X-chains, fish, coloring and patterns. My grid and aids are ©PowerPoint and ©Word template files.

Writing up the XYZ page led me back to the friendly argument I enjoyed with Andrew Stuart and the EnjoySudoku forum writer Strmckr, about the overlap between the WXYZ-Wing and a discovery by Strmckr.

It is basically a labelling controversy. Labels help us sort out the interplay of ideas and we all know that misapplied labels get in the way. What happened in this case is that the WXYZ wing, starting life as a logical extension of the XYZ wing was already compromised and losing its label to overlapping methods, when Strmckr noticed this property of an overlapped type of WXYZ-wing.

One of the WXYZ  overlappers is the ALS_XZ.  A lesser known one is something labeled here as a bent n-set, a collection n cells containing only n values (hence naked), sharing one box and one crossing line. I learned about it from Robert Hanson’s Sudoku Assistant report.

Here is the sysudokie view

of the WXYZ -wing and one of its victims. The dashed lines are weak links (winks) between like-valued candidates in the hinge and the wings. OK, the wings can also be in larger ALS packages, but the winks remain. Any outside Z that “sees” (winks at) all four Z’s is toast, because its looking at a true candidate. If Z is not placed in any wing, it goes into the hinge. That’s identical to the XYZ-wing rationale.

The thing is, if weak links are limited to candidates sharing a box or line, its hard to find a sysudokie WXYZ wing, and even harder to find a victim. Instead, you need split hinge and a crimped wing arrangement to make it work, and those arrangements are bent naked 4-sets within the box and line of the hinge. Also, they are often ALS-XZ, but let’s leave that out of it here.

Bob Hanson stated an easily checked condition for the bent n-set to have a locked, and therefore toxic value. That value has to be the only n-set value shared by the n-set cells in the bent region’s remainders. In sysudokie speak, the box/line intersection is a chute, and the units minus the chute,  remainders. An n-set meeting this Hanson condition a Bent n-Set 1, or BSN1. That’s almost Hanson’s term, but with “n-set” where Bob said “naked subset”, which it isn’t. You know, labels.

By the way, if the remainders have no n-set value in common, you have a BSN0, with n toxic sets. The candidates of every n-set value see each other. It’s a subset, not of a box or line, but the bent region.

Now we get to the heart of the matter.  By diligent observation, Strmckr discovered another, equally easy condition for a BNS1:I  If the n-set candidates of only one value are bent, i.e. not “restricted”, i.e in both remainders, then these candidates are locked, i.e. must include a true candidate, i.e. are a toxic set. The “almost restricted” condition guarantees the BNS1 condition, and therefore has a basis in proof as well as observation. Hanson explains why the BSN1 works. My latest attempt at a simpler explanation is on the Bent n-Set guide page.

I had thought that, at the time of Strmckr’s “almost restricted WXYZ” introduction on the EnjoySudoku forum, the WXYZ had already been compromised with a distributed hinge, and BNS1 with n = 4 were being mislabeled as WXYZ, and that Strmckr had little choice but to  label his discovery as a property of the WXYZ wing. In his comment below on this post, however, he points out that the dissolution of the WXYZ hinge was his proposal, made to add flexibility to the WXYZ. Now his forum thread on the alternative condition for BNS1 is properly titled Bent Almost Restricted n-Set, the sysudokie amalgamation of Strmckr description and Hanson terminology, and he freely describes it as “the barn” without caps.

All of this is actually relevant to your homework, to solve Andrew Stuart’s example 4, In his WXYZ page under ‘Bent’ Sets.  When Andrew challenged his Sudokuwiki readers to find four WXYZ -wings, I thought there might be one of those hinge cell, unit seeing, classic WXYZ wings among them. Did you find one? 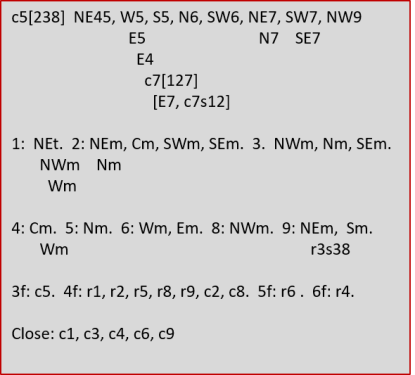 Here is the basic trace, with an active and interesting bypass to make the remaining stages routine and easy. 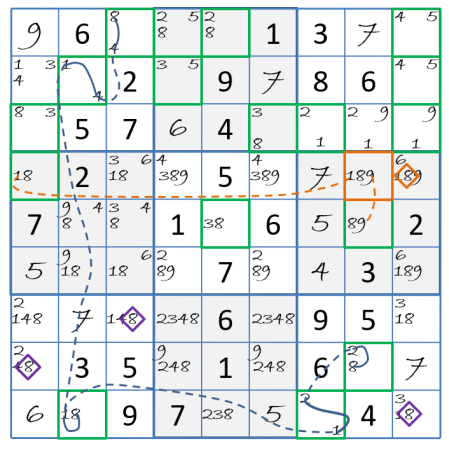 Prior to the first WXYZ, here are two of Andrew’s Y-wings (XY wings), and a regular XYZ wing. No iXYZ or or XYZi were available.

An AIC almost nice loop is enabled, and leaves the 4-set shown in Stuart’s WXYZ example 4.

The removals leave a 4-set in bent region Cr5, with 4-set remainder values 349 and 89, and common value 9. The toxic set 9 removals in r6 leave a Cr4 boxline triggering the collapse.

Oops. It takes only two “WXYZ wings”, instead of four.

Maybe somebody will show me the solver’s other two. I have to recuse myself from using any solver. Hopefully, Andrew Stuart can now agree that these two “WXYZ wings”  should be classified as BNS1’s or BARN’s, depending on how you identified them.

By the way, all of the sudokuwiki WXYZ examples are also ALS_XZ. My next post updates sysudokie readers on that.

Seriously, there is really no good reason why the classic form of WXYZ should not be given the exclusive use of the name. That would create space for iWXYZ, WXYZi, and iWXYZi pursued with inference chains as weak links. In concession to the bent side, n-sets are not limited to n = 4, and should not be tied to a label that is.

Also, the bent family rationale is logically worthy, and needs to be respected and passed on to Sudoku enthusiasts without asssociation with an entirely different rationale. The work of Robert Hanson and his mentors, and Strmckr’s BARN perceptions, need not be muted by prior inaccurate labeling.

4 Responses to A WXYZ vs. BARN Settlement