This post walks through the “very  hard” part of the solution path taken by  Andrew Stuart’s Solver through puzzle 200 of The World’s Hardest Sudoku Book by authors unknown. This is a remarkable turn of events for a blog devoted to manual solving, but there are reasons, and the results are good.

My interest in Andrew Stuart’s The Logic of Sudoku, now out of print, is renewed as I work on topics for the Sysudoku Guide pages. Although we differ on some topics, Andrew’s is a solver that can be confined to humanly practical methods.  It can serve, therefore, as backup for human solving.

Having made no progress on 200, I reluctantly turned to Andrew’s Solver as a way to include 200’s difficulty in the ongoing review, but also with an eye towards expanding my understanding and gathering telling examples of methods I couldn’t spot. 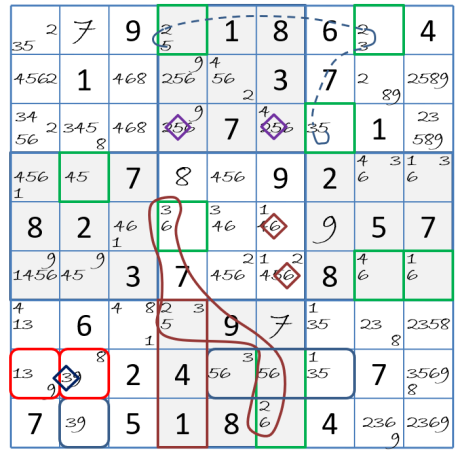 Then a BARN or BNS1, a bent 4-set 1 2356 in the Sc4 bent region. The common remainder value is 6. Solver notes still have it as a “WXYZ wing”. There is still room on the grid to show the next in order, an XY-wing ANL. 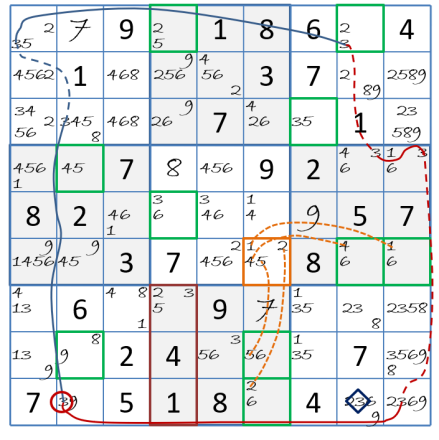 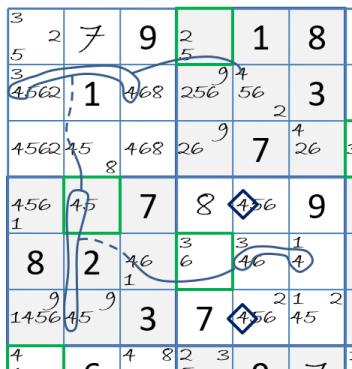 Even on the 4-panel, the grouping on these almost nice loops is very difficult to see. You might need to bone up on Sudoku group theory. 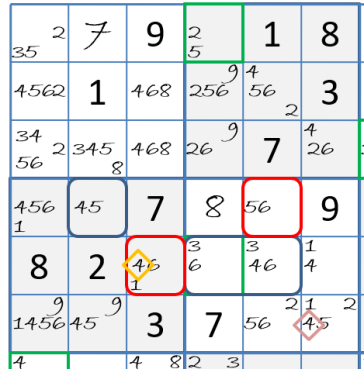 Consider the next unaligned pair exclusion a reaction to the grouped ANL removals, as the bv r5c5 becomes available as a target cell.  Combinations 45 and 46 are denied the target cells. The removal’s Cr5 box/line terminates 4r6c6. 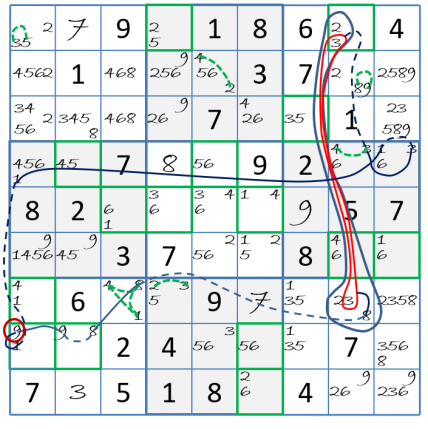 The solver followed the Sysudoku phasing to this point, but now does the AIC scan prior to coloring. I confirmed that coloring is not effective just yet. The solver does a confirming AIC with a jaw dropping ALS node.

is based on the slinks between candidate groups in an ALS. 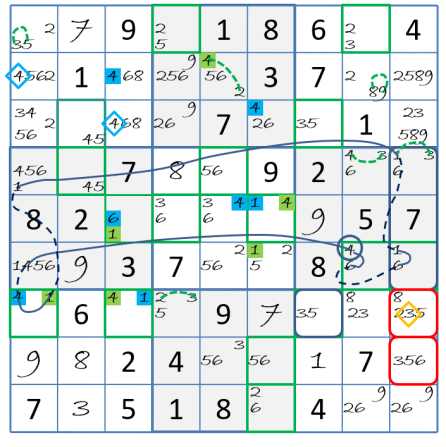 The removal of 3r9c9 brings a third ALS to bear on APE target cells r78c9, and 3r7c9 is allowed no partners. The blue/green cluster expands to trap two 4’s. An AIC confirming ANL is cobbled from 1-chain, 4-chain and XY-chain segments.

The solver continues with XY-chains, coloring, and a naked triple. In case you’d like to take it from here, the finish is reported next post.  The parade of diverse advanced methods in the solver solution, many weakly signaled and difficult to spot, justifies an extreme rating.  And it’s not over yet.