Not really hardest, but entertaining. World’s Hardest Sudoku 65 has a UR challenge, a UPE, a finned swordfish, an AIC ANL, and a very different color wrap. It’s also a few cells short of a multiple solution.

Basics are moderate, with 3-fills helping. The “hdxm” is slink marks produced by a hidden double line exclusion.

On the line marked grid, I did look at one possible UR, but couldn’t make it work.

The bv scan turns up an unaligned pair exclusion, a UPE. The pairings of 9 with 1, 3 and 8  in the red target cell are vetoed by the black coated ALS pair. 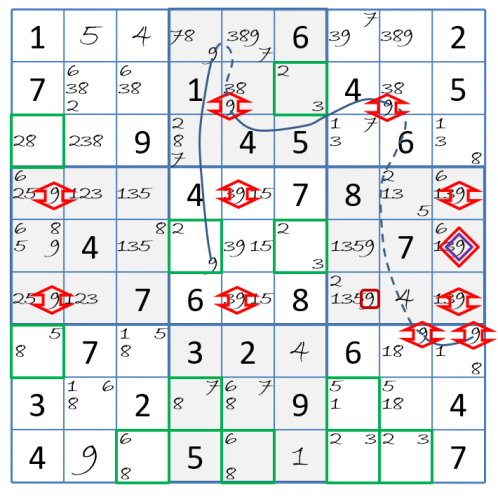 My next find was late on the X-panels, a 9-chain ANL removing 9r5c9. Then on the same panel, a finned jellyfish demands a bunch of kraken tests. All fail but the 9-chain removal, in the fin box.

Victims of a finned fish “see” the fin. Krakens escape removal if they are outside the fin box, and don’t otherwise see the fin.

An uncoordinated bv field that resists XY-chains also resists coloring. My two clusters share no values. I know that, since blue and red cannot both be true, green or orange is true or both are.

But with nothing else, its time for AIC hinges. At AIC time, you chain anywhere, any way, and look for repeats. I did uncover one ANL. 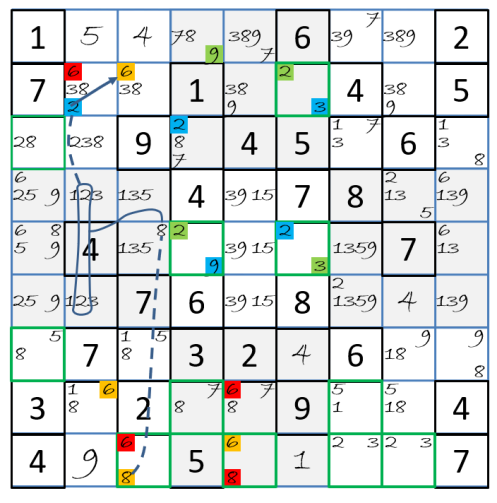 The panels show little pattern restriction, and next would have been enumeration of ALS. But first, can the aloof coloring clusters get entangled in chains? We follow up on the obvious in r2c2 that

Blue  creates waves by generating W13, a naked pair, which strips chute Wc7 down to 5 and 8. That denies orange 8r9c3. But wait. Blue can’t confirm and deny orange.  The only conclusion: blue is toast. 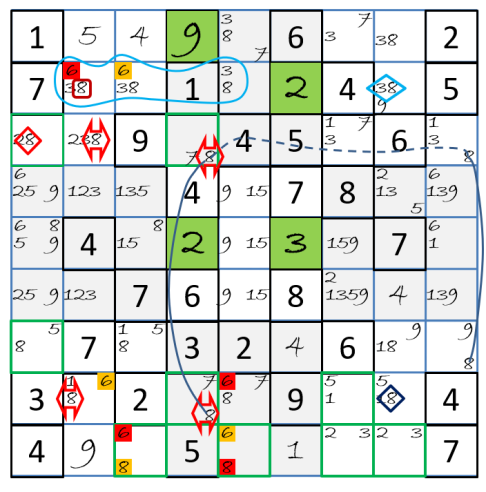 Green comes in and takes over. There’s a naked triple, and a handy skyscraper whose removal brings on a finned 8-wing. The collapse is on. I had to follow it down just to make sure that red vs. orange really gets resolved.

It does, but only with one other clue remaining. 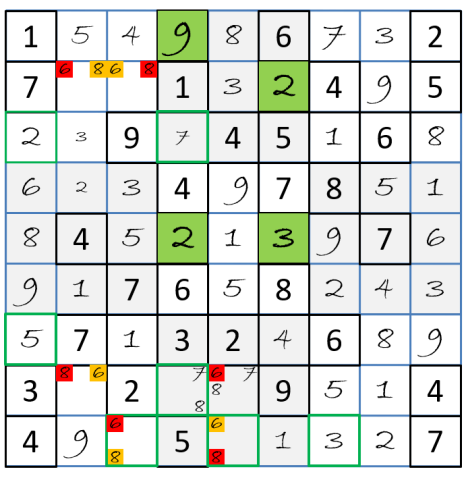 At the point of red/orange resolution, orange winning, the grid demonstrates how close 65 comes to a multiple solution. 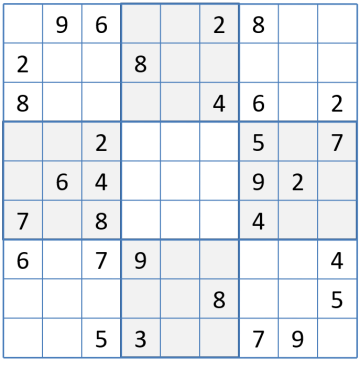 Next in the World’s Hardest Sudoku review is 102, which gives up too many candidates in line marking, and becomes a tempting target for easy XY chains and coloring. See if it’s that easy for you.