This post ends the review of World’s Hardest Sudoku Book with its Very Hard 134.  The puzzle is not all that hard, but does allow solution in a very pleasing way, for me, at least.

Right after a basic with many 3-fills in the bypass, and a hidden dublex in box marking, . . .

. . . the 8-candidates in the West box fall victim to the unrestricted 8’s in the BARN at Wr5 via a grouped forcing chain. This removal creates a boxline removing 8’s in the East box.

The BARN, or Bent Almost Restricted n-Set, is a spotting technique for the  Bent n-Set Type 1 (BNS1) now described in the Sysudoku Guide.

Next, the 5-panel gives up an almost nice loop ANL (black) which extends to another ANL (red). 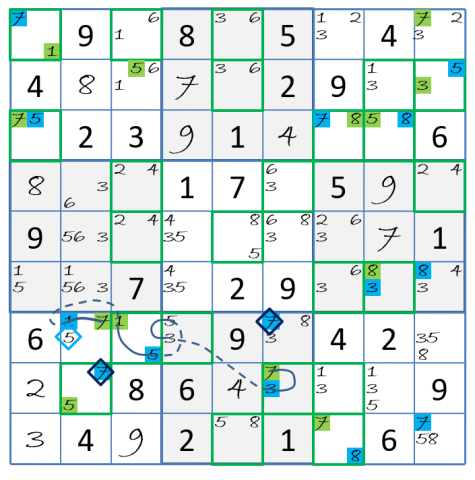 Upon adding a blue/green cluster, a trap of 5r7c2 adds just the right bv to an XY chain linking two green 7-candidates. That in itself would wrap blue,  since at least one green being true means all greens are. But having blue 7’s that see both of the green 7’s makes it more obvious. That’s enough to collapse 134, and the review is done.

Next is a report on the most recent page added to the Guide, illustrating ALS Death Blossoms.