A Guide Update and a Funster Kick Off

The threat of a “The World’s Hardest Sudoku” now relieved, this post starts a review of the “extreme” section of Charles Timmermans Funster Hard to Extreme Sudoku. But mostly, it’s a progress report on the Guide, a set of pages on the Sysudoku approach to humanly practical Sudoku solving.

The Guide is a linked set of pages accessed from the bar menu above. The hierarchy of the menu tree organizes solving techniques according to the Sysudoku template tools they use. Free ©PowerPoint and ©Word template files are available from Sysudoku (see Solving Tools above), but solvers can easily construct their own versions on their own systems, on paper, or in their minds.  When completed, the Guide may be available in book and reading tablet format for travel.

Here is the plan for the completed Guide: three primary pages for purely logical solving, and forth for trial methods. On the Sysudoku site, each section is represented by a lead menu page, covering general principles and with side menu links to method descriptions and examples.

This is about determining possible candidates of every cell, based directly on the given clues, and about slink marking, the explicit marking of strong links by candidate placement within cells. The replacement of the keypad style candidate list of most Sudoku literature is a major feature of Sysudoku. A three stage process incorporates slink pointing, box/lines, and subsets in this task.

It’s also the menu page for sections of methods based on the templates used.

This section includes advanced methods working with the candidate grid enhanced only by slink marking. It includes Uniqueness methods, Sue de Coq, APE, Bent n-set, and ALS methods. A second look at these techniques can occur as AIC hinges are added after coloring.

These methods use a table of bv cells taken from the grid, the bv map.  A XY Railway is drawn on one copy. It is a connected set of curves along all possible routes of XY-chains.  The XY-chain is the simplest and most natural form of Alternating Inference Chain (AIC).  A copy of the bv-map isexpanded to accommodate XYZ and WXYZ hinges. This table is combined with the grid to find regular wings, and “irregular” wings constructed with forcing chain weak links and/or having forcing chain “seeing” victims.

X -Panels are 9 by 9 tables showing only the candidates of a single value on the grid. Each panel is examined for X-chains and loops, including grouped nodes, that produce toxic sets.  Then the same panel is examined for regular or finned fish. A fish is a competition between lines, and sometimes boxes, among candidates of the same value, for placement locations. Candidates that prevent resolution of such conflicts are eliminated.

Coloring marks each network of strong links, a cluster, by shading its candidates by two colors. Candidates alternately connected on a coloring network logically divide into two colors, one true (in the solution), and the other false (entirely eliminated from the solution).  This property is used to eliminate single candidates that see candidates of both colors (traps) or to eliminate all candidates of one color (a wrap) when the expanded network reaches a contradiction

Pattern analysis eliminates candidates that prevent resolution of another kind of conflict, that like fish, is not directly defined by links between candidates. A pattern is a selection of remaining candidates of the same value and not seeing each other, that leaves one candidate in each box remaining.  The line marked grid generally leaves a large number of possible patterns for each of nine values, but in the solution there is only one pattern for every value. A humanly practical form of pattern analysis,  in Sysudoku named Limited Pattern Overlay, uses X-panels and a graphical freeforms to represent competing patterns.

Since advanced methods come in easier and harder-to-spot forms, it makes sense to  invest a reasonable amount of effort on each before intense pursuit of any. Solvers do make subjective decisions about when to move on.  For some methods, the Guide may suggest and illustrate a version “for the second round”, meaning after giving all the methods above a go at it. But in the case of inference chains, there is a second aspect to this.

An important fact that no one seems mention: The role of any link in any method can be filled by an AIC.  A first round example is the XYZ-wing, where wings and victims are made possible by using inference chains for weak links.  Even here, there is room for a second round, because I only looked at grouped X-chains for that purpose. I could use XY-chains and coloring links as well.

To open up possibilities even further, the Guide suggests beginning the second round with a grid enhancement,  the AIC hinge. In every cell, place an explicit wink between every pair of candidates that are slink partners with an outside candidate. That creates a 3-candidate slink chain that can carry a Medusa slink inference in a longer AIC. It allows the bv a second role in AIC.

A complete guide must address the problem of being stuck. Sysudoku  places no value in guesses which reveal nothing.  However, there are many benefits to trials. A trial is an assembly, by logical means, of a set of candidates that are in the solution or eliminated together. The Sysdudoku trial trace is a way to document which and why.  It can be a safeguard against multiple solution puzzles.  I hope to stay with this long enough to determine for myself if methods in use for monster puzzles are logical methods or trials, but in any case, they are justified.

That’s the plan for the Guide. Thanks for reading through it. I welcome comments.  As of now, Sysudoku Basic, and Sysudoku Advanced through the Slink Marked Grid and the XYZ wing are in the Guide. Next comes the XY chain strong link and its Almost Nice Loop

The most recently added page is on ALS Death Blossoms. The general definition accounts for stems of all sizes, but it’s evident that the stem is rarely above two values. The typical rectangular shape of the DB is illustrated, and the possibility of overlapped petals is addressed as well.

All of the Guide’s DB examples are from a browser search, since I found no comparable examples in the reviews. My problem seems universal among human solvers, since many earlier examples are repeated on different sites.

A notable discovery for me is an ALS DB which eliminates candidates of value other than the common value between the ALS. In this particular example, there is no common value victim. This case was presented as a typical ALS DB, but it is actually a rare special case. For the details, you’ll have to consult the Guide. 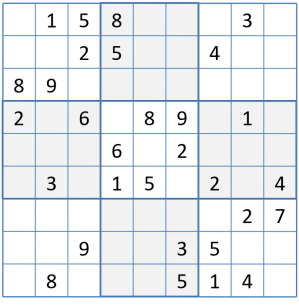 Now about that next review. Here’s Funster Extreme 4 in case you don’t have Charles Timmerman’s  Funster Hard to Extreme 400+ Puzzles. The book provides the givens screened candidates, but IMHO you’re better off to ignore them in favor of the bypass and slink marking basic of the Guide. More progress and more fun.

Most of selected funster extremes make it to advanced, but none are truly extreme. There are good, simple examples, so I’ll take a slow leisurely trip through them. There will by good bypass challenges, and you may well find alternatives to share in comments. It looks like a hot summer.