This post takes on a challenge puzzle 17 which follows the Figure 30.1 of the previous post, in Andrew Stuart’s The Logic of Sudoku.   A boomerang ANL shows why aligned triple candidates are eligible to be AIC hinge partners.

Logic 17 looked unlikely to continue after a bruising bypass round, gave up nothing else. My basic trace:

The opening advance is a remote pair.  Actually the 58 cells allow two, but I found no victim for one of them.

Then, as in 30.1, the bv scan yielded nothing, in spite of a much more generous bv field. No gifts from the X-panel either.

So when two clusters stalled as well, I added AIC hinges and started doodling. This time I included aligned triple partners as possible targets for a hinged ANL wink.

In the exploration of  the r9c4 hinge, an aligned triple hinge, you can start at the slink terminal and arrive at either  triple partner  at the other slink chain terminal, for a boomerang. The ANL takes an XY node and a 2-chain.

The hinged ANL from r4c5 requires a reversed bv and 2-chain. If you can get back to the cell of the other hinge terminal, on a candidate of that cell, you have it.

I’m checking the X-panel of the victim on each elimination. A new slink comes with this one. 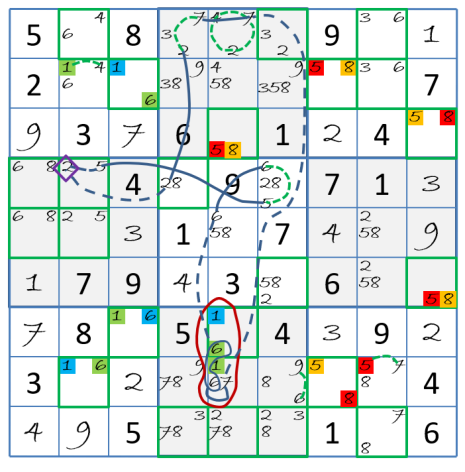 In the analysis of the r1 hinges, the r1c4 hinge is not dependent on the aligned triple partnership, because 2 is a slink partner. Starting from 2r4c4, you would use r4c2 as an XY node until you see the opportunity to re-use the r4c6 hinge above. To keep the AIC going, you can go through one discontinuity, the pair of winks.

Or going the other way, you come upon the r78c5 ALS 167 as the connecting node.

The destruction of the 25 naked pair adds a 58 bv and another remote pair, wrapping green for the collapse.

In The Logic, Andrew described the 17 challenge as requiring “some fancy footwork with the strategies discussed in these lfew chapters”.

More specifically, it can serve in the Guide as a clarifying example on human exploration of AIC hinges.

The next Guide page will be on Sysudoku pattern analysis.