After finishing KD 415 with two irregular XYZ and a color wrap,  Sysudoku basic encounters a similar unbalanced candidate cloud in KD 425. The XYZ map brings a grouped 7-chain i173-wing with a very unlucky victim seeing two toxic set members via 3-chains. Unlucky and indecisive. That joy was dampened by my missing the only Sudokuwiki elimination prior to AIC building, a simple 1-chain ANL, similarly indecisive. 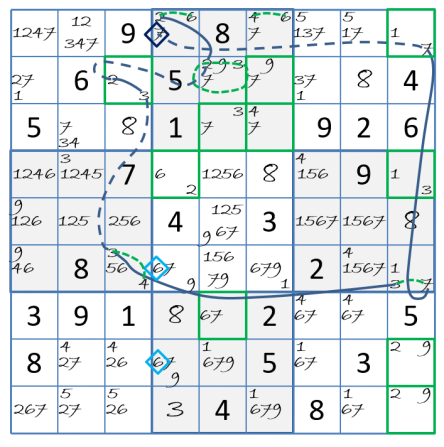 Then a string of three suggestive boomerangs highlight the spotting principle: A slink leaving the cell starting a chain worth following.  As you follow, look for a repeat of the starting cell values and a way to look back.

And if you are already following an AIC for another reason, and it leads you into such a cell on a slink, look back along your path for one of those other values. Is there a wink into the value here?

Both of these spotting signals go into the post, and the second way leads to the re-use of most of the path of the first boomerang in a second one.

And KD 425 keeps on giving. Here is a boomerang ANL with the 7-slink leaving a group, not a candidate, and leaving a box, not a cell. That has to be a unit boomerang. Or is it a cell boomerang with the 1-slink leaving the cell r8c7 and the returning wink defined in the box?  It opens the gate for much more AIC building.

We’ll leave for next week, and Christmas day, comments on the KD Insane 425 introduction to pattern slicing.