This post reports on the updated KrazyDad Insane still at its posted date of August 20, 2013, but now updated to continue the introduction of pattern slicing, or pink/olive pattern analysis, by showing how it leads to decisive trials when needed.

In Sudoku there are monsters, which require trials to clear the cloud of candidates before doing anything, and there are the toughest of the tough, where reasonable techniques work until they don’t. So far, KD Insane 455 is in that category, and the post of 8/20/13 can demonstrate how a trial is defined and conducted by pattern slicing.

After the customary Insane basic, an ALS_XZ in line marking and a boomerang ANL very unlikely to be found by a human solver, Stuart’s Sudokuwiki  finds an orphan where freeform enumeration would be beyond reason. Then begins a systematic pink olive pattern analysis over three panels

The first goal of the pattern slicing method is to divide all patterns into two disjoint sets, all patterns in each set starting with the same candidates in the freeform starting lines.  Panel cells are shaded in pink and olive colors to show where freeforms can cross starting cell lines while remaining in the pattern set it started in, pink or olive. 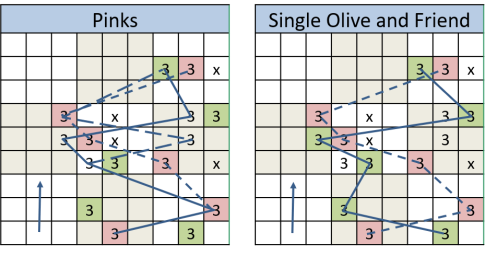 Using the KD Insane 455  3 freeform panel as an example, starting rows 9 and 8 divide the 10 freeforms into three pink and seven olive patterns. Cells of higher rows are shaded in columns above these cells to show where freeforms of the opposing set and color can cross the column. For easier interpretation, we duplicate the cell shading and put the two sets in separate panels. 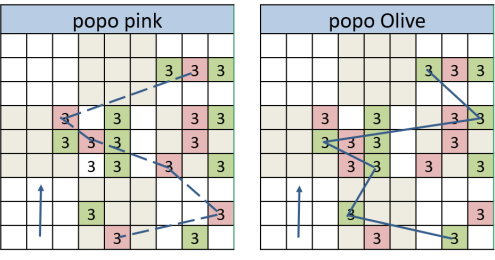 In Insane 455, there are four possible pink olive maps of the two columns not containing a 3 in row 8 or 9. A pattern cluster is possible as the first one, shown here, restricts freeforms to one pink and one olive.

But then another of the  four possible maps produces its own pair of patterns. The analysis moves on to another panel in hopes of finding a coloring cluster of two patterns. Panels of values 4 and 6 are mapped, with very similar results. The 4-panel analysis produces an orphan, which nets an ANL and a small coloring cluster. The 6-panel is less restrictive, yielding three shadings and corresponding cluster pairs.

Once the freeforms are enumerated, mapping effects are easily determined. Any of the three panels will likely yield a decisive test, yielding the solution or pointing to the true pattern. 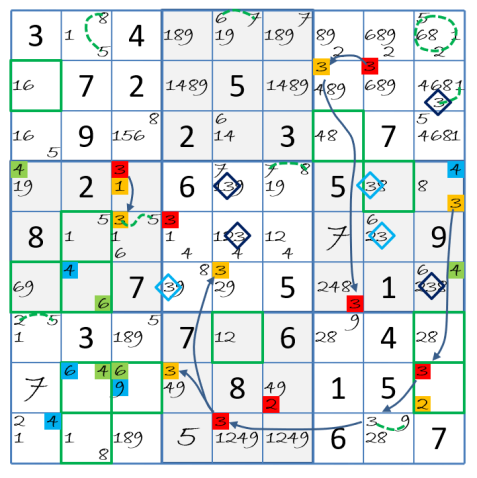 The post displays the solution path, merging the coloring cluster and the pattern cluster.  A Sue de Coq expands the merged  cluster into a wrap.

That illustrates how advanced methods are directed to a solution by trial concepts and set up.