This post reports several features of an update of the post that introduced nice loop coloring. The illustrating nice loop was in itself remarkable.

As shown already from books 1 through 5, KrazyDad’s hardest, the Insane collection, is hard enough to force new ways to use familiar tools. The blog explained the nice loop in early 2012, and showed its elimination power as the AIC forms of  the nice loop were encountered. But only when faced with nice loop fashioned with two ALS nodes did I realize the coloring established and given a direction by the loop could move off the loop in X-chains. 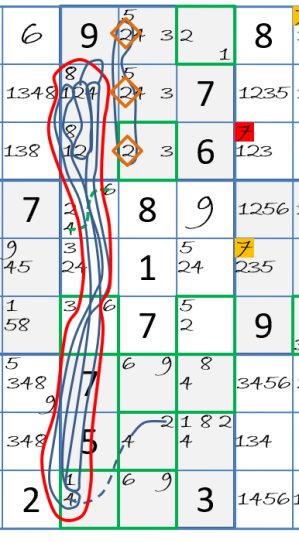 In the updated post of 8/27/13, KD Insane 465 finds a 7-wing on the last line of line marking. It’s Sysudoku practice to collect X-wings while assembling candidates. The X-wing enables a coloring cluster to be completed by basic logic. How many times have I forgotten to check for that?

After 465 gives the Insane password, a boomerang, Sudokuwiki gives up.  I had an irregular XYZ  wing to continue, but watchful reader Dov Mittelman had my back, and called out a faulty inference chain attaching a wing.  Fortunately, there was another way to get that XYZ clue, an almost nice loop with a very unlikely ALS node supplying a slink chain terminal. 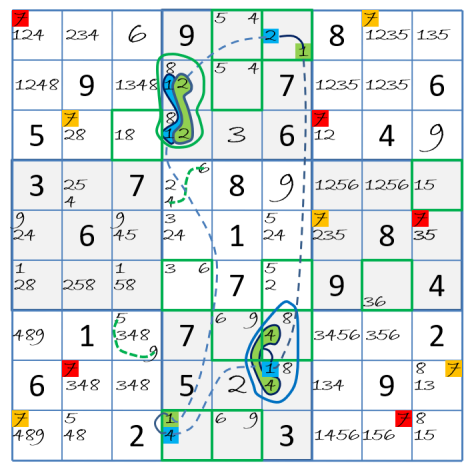 Then we come to that rare gem, a nice loop made with two ALS nodes. But the beautiful thing has no victims! When you go there and look at it, you’ll see why. The ALS node groups take up all candidates that could see adjacent nodes of the nice loop, putting them in the nodes.

So how do you make use of this beauty? By using it to introduce a new solving feature of the nice loop.  An AIC can spin off the loop in two useful ways illustrated here.

A slink chain can carry the coloring out into the grid. Here a slink chain colors 4r5c6 and the C 4-group.  Another connects the three 2-groups  and a single 2 into a slink loop, extending the blue/green nice loop cluster to two new groups. Coloring groups is rarely useful, but it is useful to know about it.

More frequently occurring is the type of ANL extension shown here with red alternating links. If blue is true, the extension 4-chain makes 4r4c2 true, so a trial of blue can include it.

After the pink olive strikes out, the KD Insane review’s first attempt at LPO, the pattern conflict side of pattern analysis is next. A tabulation overlays pink/olive 3-candidates and the red/orange cluster candidates. The result is indecisive, and the weakened KD Insane 465 is solved with  a coloring trial. It’s too easy to be fitting

The next post looks back to the update of KD 475. These updates are more than cosmetic, and back up the original solution with Sysudoku interpretations of added Sudokuwiki moves. This Insane review is particularly innovative in coloring and pattern analysis.

2 Responses to The Especially Nice Loop of KD Insane 465