In the updated review of the KrazyDad collection of puzzles, Andrew Stuart’s Sudokuwiki solver is a backup on advanced solving, except in irregular XYZ, coloring, pattern analysis, and trials. Prior to the update on Sysudoku review of Insane 475 in these areas, the post of 9/3/13 interprets the Sudokuwiki solving path, noting two areas of concern, given Andrew’s intent for Sudokuwiki to emulate humanly practical solving techniques. The second post, of 9/17/13, reveals a pattern slicing analysis  requiring too many trials, and reports the success of a more decisive Single Alternate Sue de Coq trial.

After two almost nice loops which Sysudoku identifies for spotting purposes as boomerangs, I’m inclined to name another new form of ANL, again an aid to spotting. One terminal of the ANL is an ALS with a single candidate value removed by an incoming wink. The victim sees the resulting naked pair. To call attention generally to this kind of AIC node, I call it a subset node. The strong link is between ALS value groups in the subset.

The corresponding Sudokuwiki message carries no spotting insight. That is the first concern, that the message reflects the solving code of the solver, but not the filtering necessary for practical human solving.

A second concern is that in the Sudokuwiki explanation of this example. It is treated as a loop around 2r8c1 such that wherever you start, the AIC in each direction forces 2r8c1 to be false. The two directions are obtained by choosing a digit on the loop and assuming it true, then false. In an AIC that sets the two directions of inference travel. Sudokuwiki messages use Stuart’s label, a “digit forcing chain”. That term has no added meaning, because you have to discover the almost nice loop before you identify a digit on it. 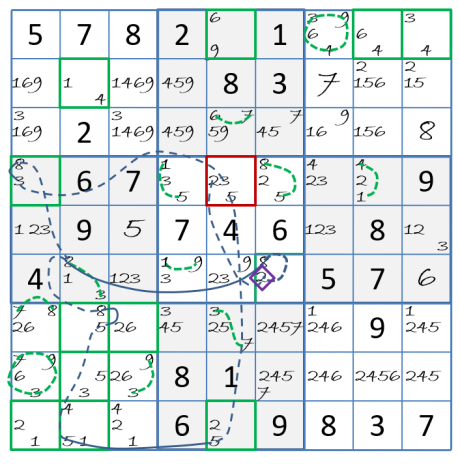 Next the Sudokuwiki path includes two cell forcing chains. Here is the second one. It is easy to explain in forcing chains, but impractical to find. Three forcing chains leave the candidates of r4c5 and terminate on 2r6c6. One of them must be true, so 2r6c6 must be false.

The review post follows Sudokuwiki  all the way, seeing many interesting variations, including Sudokuwiki’s simplified coloring.

In the next post of 9/17/13, we return to the grid at the first cell forcing chain to see if we can finish off Insane 475 without them, and find no suitable pink olive restrictions on 3, 4 and 5 panels. This affords an opportunity to demonstrate another type of trial in the Sysudoku repertoire, the Single Alternate Sue de Coq.

The return point grid has two SASdC examples. One is Wc1, that would be a Sue de Coq if 1r6c2 were removed. It would have a bv to match each of the alternate terms in the logical description of its contents:

It so happens that a second SASdC is available in SWc2 to remove that impediment. Its three values are described by

So what? We put 8r7c2 and 3r8c2 and 5r8c2 on trial, winning either the solution or a very damaging set of removals, or winning the c2 removals and more removals in c1. What are they? 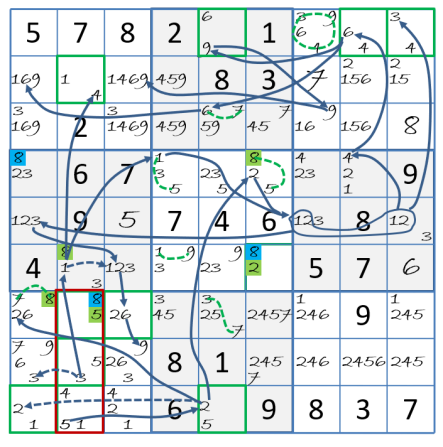 This is how the 835 trial turns out. Sysudoku trials are traced out in a breadth first way described on the Traces page, and diagramed with arrows to document the contradiction. See if you can follow the arrows showing how the 835 placement forces a contradiction, and what that contradiction is. Thankfully, in most cases, such diagrams are simpler, with most of the trace being bypassed by the arrows.