This post is about the update of the 9/24/13 post on KrazyDad Insane v4, b8, n5. An unrecognized type of ANL found by Andrew Stuart’s Sudokuwiki solver is accorded a spotting technique, and a name suggesting the technique. When the solver exhausts its human techniques repertoire, a Sysudoku pink olive cluster trial breaks through for a solution.

As if the puzzle were aware that KD 475 was solved by SASdC trial, 485 starts with a cautionary example on how to set up a Single Alternate Sue de Coq trial with the second alternate represented by a bv in the SdC intersection. The trial is deferred for a last resort, and is never needed.

Then after one X-chain ANL, Sudokuwiki offers a series of six AIC building ANL, the last three on the very same set of links. 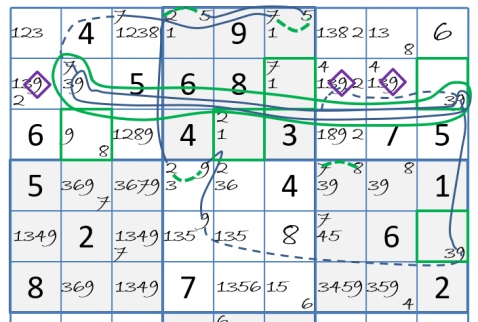 This last structure is an extraordinary AIC ANL. One terminal of the slink chain is a value group in an ALS. The other is a candidate member of that group. In effect, the ANL proves that the 9-group is a toxic set, with three victim onlookers.

Two writers with two different purposes in mind are called upon to account for it.  Andrew Stuart, who built Sudokuwiki and wrote its code, classifies the ANL above as a digit forcing chain. The updated post on Insane 485 explains why this labeling is no help to the  human solver.

The description above covers what it is, but that isn’t enough. I didn’t find this thing. My job is to account also for how a human could find it, or recognize it when it occurs by accident. The distinguishing feature for spotting has to be the ALS value group with one candidate member slinking out of the ALS. If the AIC beginning this way gets to a candidate that sees another value group of the starting ALS, the value group is a toxic set. A  name reflective of all this is the ALS boomerang.

The solver continues with good examples of a Type 2b unique rectangle, a naked triple, two esoteric boomerangs and a rare form of ALS toxic set, but  eventually gives up. 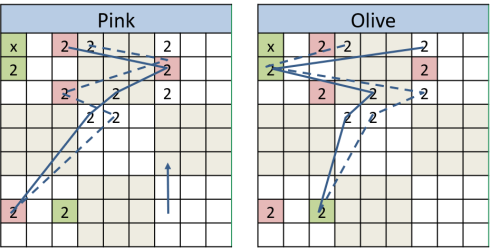 A pink olive analysis of the 2-panel uncovers two disjoint pairs of freeforms for cluster trials.

Dashed pink and solid olive are paired, then solid pink and dashed olive, to give two complete pattern clusters.

Each cluster is added to a small blue green cluster for a separate trial. In the trial of the solid pink and dashed olive cluster, the latter is quickly wrapped. In this example of graphic confirmation, orange removes all 6 candidates from r4.

Next time I report an updated second chance solution by Stuart’s Sudokuwiki solver, when given the ALS boomerang’s clue by a very rare and very human pattern analysis.