After the two Basic level 96 and 120, James Forest’s Classic Sudoku comes back with one puzzle, 144,  in the tradition of the KrazyDad Insane collection.  The bv are there, but it takes a few X-chain ANL to jar loose a couple of APE for the bv scan. Then AIC building brings a long stream of Sudowiki boomers, finally ending with a line slinked cluster, which is immediately wrapped by an AIC confirming ANL. A second, more extensive cluster is then wrapped by a late emerging XYZ-wing.

Your first checkpoint is this grid as box marking ends. A built-up naked triple is left for the marking of four rows to follow.

Line marking is tough, even with the naked triple and a hidden pair removing four candidates in r5c1.

A Sudowiki follow up is this APE worthy of a Guide example. Restrictions on red cell pairings include a separated ALS in c8, taking out the 27 pairing, joining the 79 pairing to remove 7r3c8. 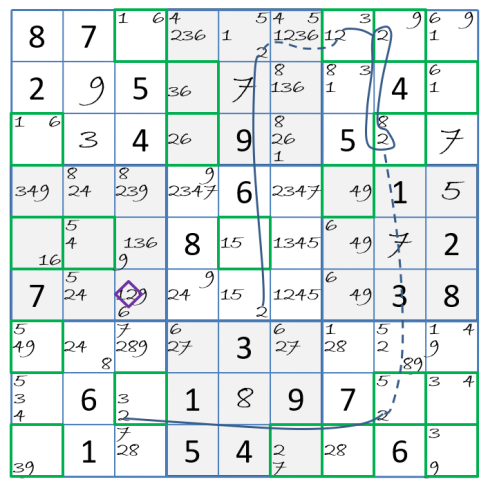 a grouped 2-chain ANL rounds out the X-panel attack.

The removal supports another APE defining example, allowing a box ALS to participate.

Coloring doesn’t get started here, so its time for AIC building.

The KrazyDad Insane update showed that AIC hinges are not used frequently enough to mark ahead of AIC building. Cell winks of other kinds are too often useful to have the pre-drawn AIC hinges distract attention from them.

In Boomer 1 the 3-slink emerging from r1c7 is an XY-chain.

The first AIC boomer is the fourth, with the 5-slink AIC using an AIC hinge and two reverse bv to go to 4, 5 and 9 into starting cell r7c1.

The same chain is used in a back up boomer 6, starting with a 4 from cell r1c4.

Going back one, boomer 5’s 6r1c6 removal adds a second slink for this hidden unique rectangle, Type 1. If 2r7c6 is true, the slinks force 6 in the two adjacent corners and 2 in the opposite corner, a composer’s nightmare.

Let’s pause for an opportunity for you to finish Classic 144 your way. There’s plenty of action left.