Only Extreme 390 is Advanced

This post finishes the updates on Manuel Castillo’s Only Extreme Sudoku with a less advanced OnEx 390.  This one is a better example of the Sysudoku XY Railway than was the original post. No trials were required in the ten puzzles pre-selected for the review. A plan for summer Sysudoku is posted.

The original review solution was posted December 27, 2017. At that time, the 3-fill was not a regular feature of Sysudoku Basic.

In case you would like to compare the basic paths to the same line marked grid, here is the updated bypass trace.

On the XY railway plot below, these are overlaid in black and red.

Instead of the original’s accidental spotting of an AIC nice loop, Sudokuwiki adjoins another XY ANL(red) to its first XY ANL (black).

On the XY railway plot below, these are overlaid in black and red. 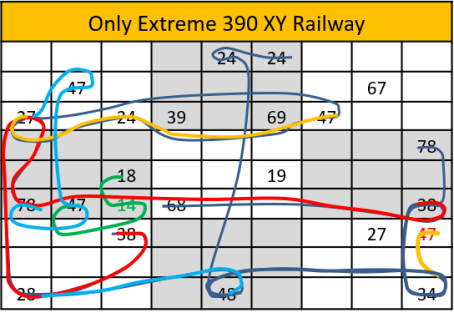 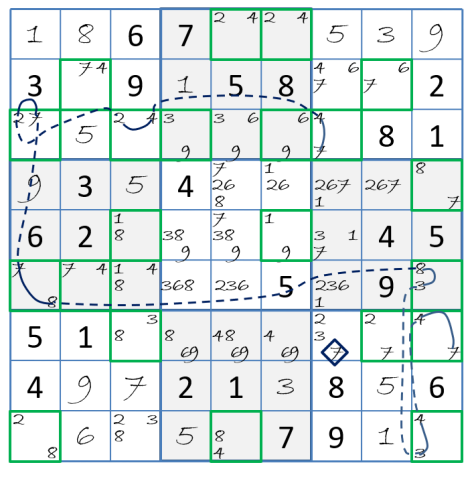 Sudokuwiki’s third XY ANL can be traced on the railway starting in orange at r7c9 and following black then red to orange at r3c1. 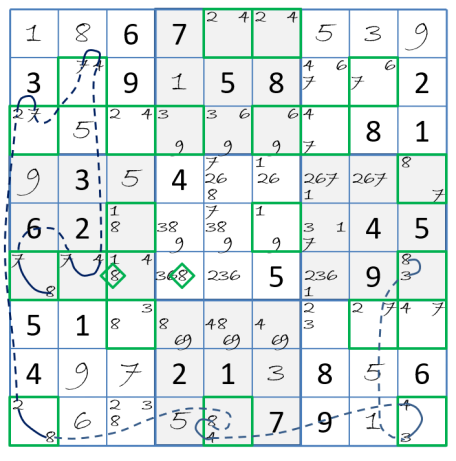 The fourth XY ANL re-uses the XY wing, extending from 8r9c5 in blue and following red to r3c1 to continue in blue.

gAnd finally, the fifth XY ANL triggers an 8-wing. It starts from the same r9c5 cell and moves along red and blue to emerge in green.

Although the XY ANL sequence was favored by the solver, it is entirely  within reach of the Sysudoku approach of creating the railway and spotting ANL along it.

The systematic search can have different results, depending on which XY-chains are seen first.

Next, Sudokuwiki responds to the growing coloring opportunity with  an unusually extensive cluster. In the trap,  2r6c6 is removed by both green and blue, one of which must be true.

Here is the updated review table for Emanuel Castillo’s Only Extreme collection. 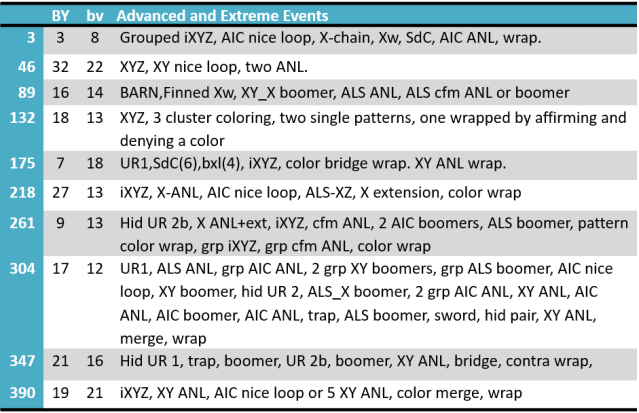 The plan for the Summer 2019 blog is two collection reviews of “Extreme” collections, along with reports on blog improvements too long neglected. The objective is to have the blog ready to support the Guide as a paperback and e-book publication. The pages on The Guide, Sysudoku Basic, and Begin With the Bypass have been re-edited, and Box Marking is next. The Titles page is updated. 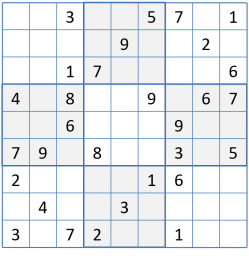 The next review is LuckyPandaBooks 504 Sudoku Puzzles, by Markus Buehl. My pre-selection schedule is 48 to 480 in steps of 48. The book is labeled as “Extremely Hard” on the front cover and “Insanely Hard” on the back, but if you are following the Guide, anticipate an entertaining exercise with ordinarily advanced methods, with a possible collapse in basic.