Bottom right 49 brings up a Sysudoku Basic  policy question on its first move. If you’re working through the preview puzzle grids before the weekly post, what was yours? Was it E4 or NE1?

At first, I started with E4, having found no 3-fills, and no clues through 3. Later, after investing considerable time on the bypass trace, I realized that NE1 is forced in the c9 4-fill.

It doesn’t matter to you or to PencilPress, but but Sysudoku’s Sudent must report the choice most consistent with the systematic Sysudoku Basic.

On one hand, Basic doesn’t call for examination of every potential line with four unclaimed cells. There are too many, and success is too rare. But on the other hand, later stages often present me with something I overlooked in the bypass. We just considered how the trace enables going back and picking up right there. I do it without a twinge of guilt for not admitting my overlooks. The truth is, that in this blog, overlooks are only important if they reveal useful awareness.  Sudent’s trace starts with NE1, because the 4-fill is obvious enough for a glancing check on bypass 4-fills, and will certainly by noticed in later Sysudoku Basic. In keypad basic? Fill the grid with number scanned candidates and then decide.

But then, you might say that putting the 4-fill first is not consistent with Sysudoku Basic, and its practical policy mentioned above. That’s right, but NE1 still comes first, because the science of the puzzle is more important than human engineering policies for discovering it.

Here is the grid at the end of the first leg with a NE1 start.

In the corresponding trace, we need to pull out the most recent unused effect for a cause. Where is it? If you’re not confident in your answer, you can confirm it in the bypass trace at the end.

Not saying only one is right, below is a bypass trace starting with E4. The collapse is steady, with two pull backs to later list effects. 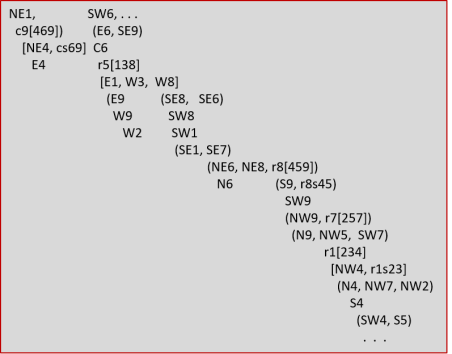 The trace starting at NE1 begins similarly, but has a steeper collapse, while arriving at the exact same conclusion. Causes and effects just fit together differently.

The difference in traces  shows why conventions for ordering lists are followed in blog traces. By following the same conventions as you write a trace, a useful match with the blog trace is more likely.

Turning now to Tom Sheldon’s Master Class Sudoku collection, the review update has good news and bad news. The updated Basic is more effective, but this means that two highlights of the original review are preempted. Here is the new basic trace of Master Class 60.

For what could count as a Basic highlight, here’s a snapshot at the placement of E9.

This comes in the marking of r9, in which two naked pairs are completed. At this time, only the r2 6f: line is left to be marked.