The FTSPAH review ends with a puzzle that might indeed frustrate experienced solvers, number 184.  It appears to require AIC building.  After the details, this post ends with a bypass trace of 124 which begins with three line 3-fills, and collapses in response to the first of them.

Hints of toughness are all along the basic trace of FSTPAH 184. There is no given 8, and puzzle resists the bypass, and denies a productive 3-fill.  There is no bail out in box marking, and 184 hangs tough in line marking  until a 6-fill clears some clutter before the last line, a 7-fill. 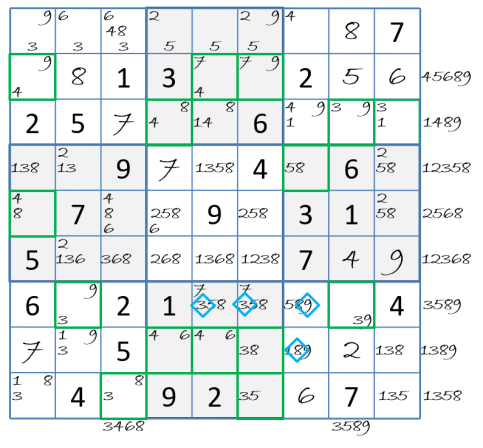 Here’s the grid at the naked pair r7s39. It has to be frustrating to search for advanced structures in the  keypad  version of this grid.

In this one, bi-value cells and strong links are marked and visible.  Anyone interested in tough Sudoku can learn this much ©PowerPoint.

The first advanced move is often an XY chain Almost Nice Loop, an XY ANL, as it is here.  The systematic XY railway method makes the spotting easy. Curves are drawn connecting like values to form the railway, which is explored for repeated values defining XY ANL and nice loops.

But now 184 somewhat justifies the cover warnings by demanding AIC building. In this phase, AIC chains are extended by all means necessary from slinks emerging from cells in the attempt to close a loop on the starting cell. With so many possibilities requiring detailed exploration, AIC building can be frustrating, and cursing doesn’t seem to help a lot. 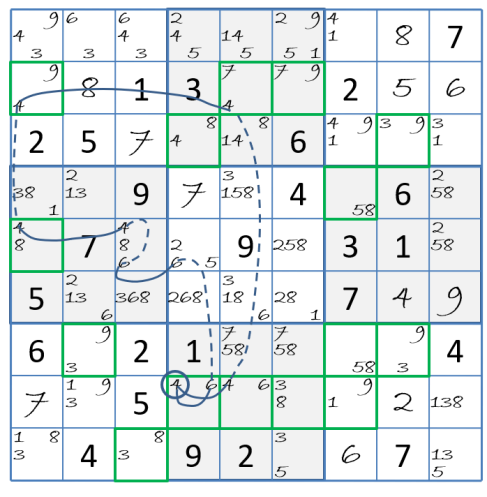 A long 4-chain with several terminal pairs but no ANL victim is extended by a 6-chain into a bv boomerang confirming 4r8c4.

It looks deceptively easy, once you find it. The problem is following the humanly practical process that has you looking there. 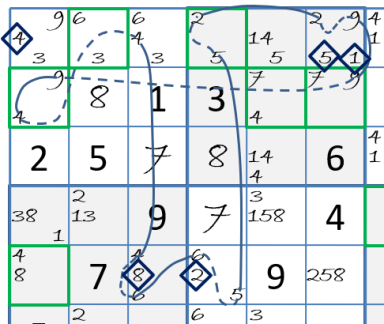 Next, an AIC starting at 4r1c3 to 4r5c3 continues to find another slink until it returns, not to 3 or 6 for a boomerang elimination, but to 4 for an AIC nice loop. Now every outside candidate seeing both ends of any link is eliminated. Four more bv are created.

The bv added in AIC building make coloring much more attractive. In the first cluster, two candidates are trapped. They see the same value in one color, and share their cell with the other. Blue or green, these two are eliminated. 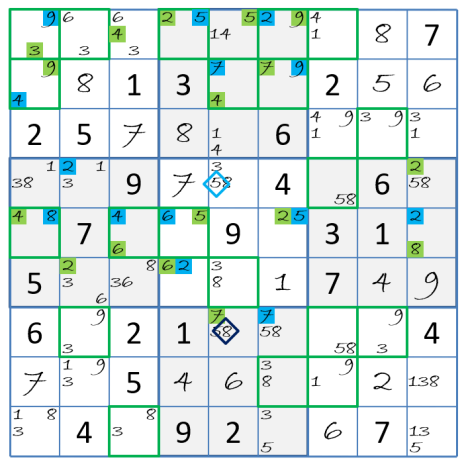 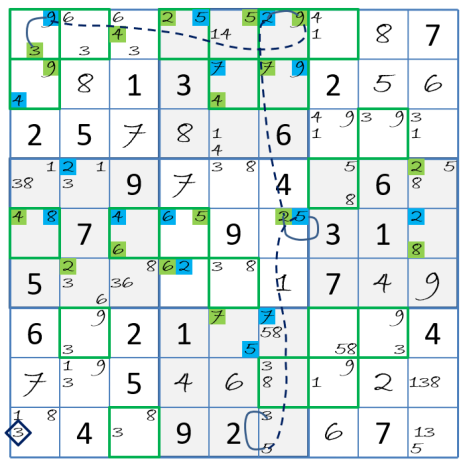 In the expanded bv map, an XY ANL removes 3r9c1. 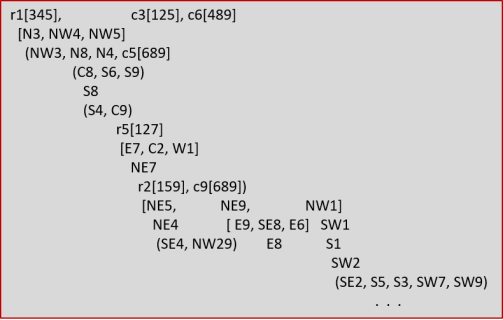 As promised, the last word on  the FTSPAH  review is the bypass collapse of 124. The only possible frustration here is a discovery that you missed an effect in the rush of them.

The next collection up for Sysudoku review is Sudoku Super Fiendish, by Brian Challenger. It is a small collection of 100 puzzles. The 10 – puzzle sample,:  7, 17, 27, …, 97, covers 10% of the collection. For that reason,  the review will preview the givens for only the first review puzzle, SSF 7. To work ahead further, you’ll need to order your own copy.

You’ll have some extra time because the next two posts will deal with two entries in an interesting Sudoku puzzle contest, known on the Enjoy Sudoku forum as “the pattern game”. My friend Gordon Fick sent along two successful entries by Mike Metcalf based on the same pattern. 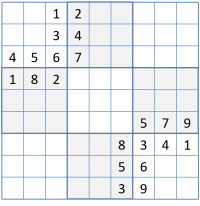 Here we will call them ‘mike 1’ (shown here) and ‘mike 2’ to follow next post.  If you are not already, you might pretend to be a pattern game contestant, and make up your own mike 2. Even with a solver to check each effort, it’s not easy.