This post reports two puzzles in the review of Brian Challenger’s Super Fiendish Sudoku, Sufi 47 and 57. Both are basic level, and in fact, half of the review puzzles are. For Sysudoku solvers, the term ‘fiendish’ is an overreach.

The only other ‘fiendish’ collection reviewed here is Wayne Gould’s Train Your Brain Su Doku Fiendish, published in 2008, and taken from the New York Post. It was briefly reviewed in November 2014.  “Fiendish” was a cover label on Gould’s New Your Post collection, but  all review puzzles from that collection were basic level. To his credit, Gould advocated Sudoku as mental calisthenics. He was aligned with the Sysudoku slink marking bypass in his advice to minimize pencil marks.

Here is the line marked grid of Sufi 47 at the first naked single of line marking, as the collapse is getting underway.

The naked single SEns1 appears in the slink marking of c9 in the basic trace below. 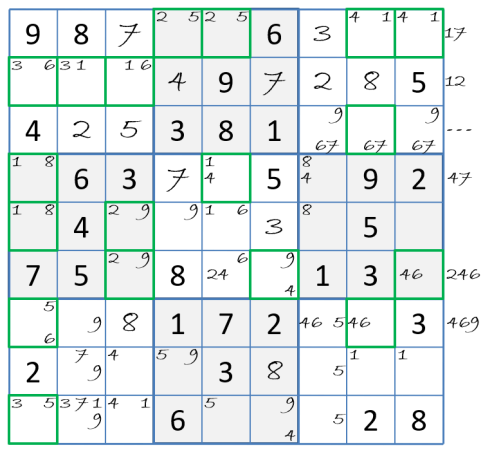 Super Fiendish 57 has a very similar basic trace, and again, a collapse in line marking triggered by a newly naked single SWns9 on r7.

Next are sufi 67 and 77. One is a bypass victim, the other, the most advanced of the reviewed Super Fiendish. Here are the solutions of