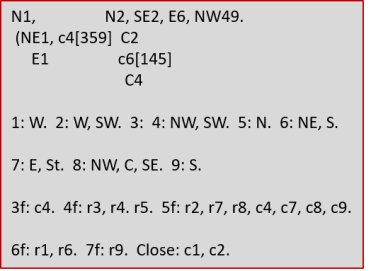 This post reports Sudokuwiki AIC building in Nakex 63, until it is overtaken by pattern analysis and coloring. The solver’s path is continued in the following post.

Nakex 63 basic is tough, despite a productive bypass.

The first advanced move is one 3-chain ANL, extended by a NWc2 boxline, and into a longer one. 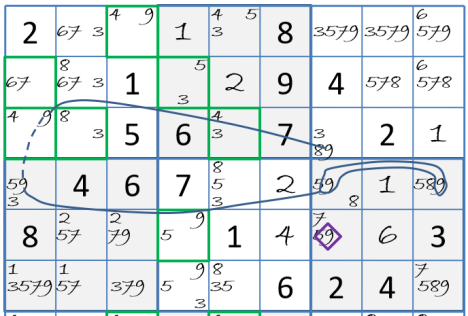 Getting to the 9-panel, grouping makes a slink in r4. The victim sees the grouped terminal in the East box. 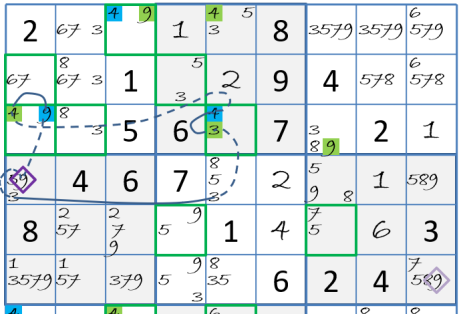 After planting a cluster, we follow Sudokuwiki into AIC building with an easy AIC boomerang 1 from 3r4c1.

The removal expands the cluster in c1. In fact, looking at the 9-panel,

the new c1 slink brings the slinks from 9r3c1 to three, and winks from two of them bring to five the number of 9’s that are true if 9r3c1 is false.

Translated to coloring, two green patterns and one blue one are expanded, as four traps become orphans. A pink/olive result in blue and green 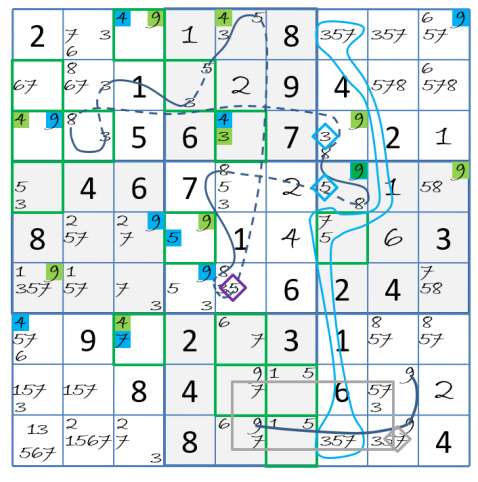 Sudokuwiki doesn’t see the pattern eliminations or the naked triple and hidden UR they bring, but goes ahead with the boomer parade. Next, from 8r6c5 an XY node and a reversed bv three X-chains tied together for AIC boomer 2.

Boomer 3 in the parade, from 3r9c3. In building a boomer, after every slink you try possible winks, going with any that reach another slink, or a starting cell candidate. You can see the destination slink in every transition here.

We don’t report on the stalls, like 3r6c1 after the starting slink. There are no more stalls here after we reach 5r4c1. This is the second of four possible continuations, working clockwise. If all AIC after 5r4c1 fail, there are two possible wink/slink continuations remaining, to 3r6c4, and to 3r6c5.

Along the way, there are two possible return targets here, 2 and 7.

It takes persistence to explore all possible return paths. Many of them fail, and some after considerable effort. But there is a systematic process that is humanly accessible. 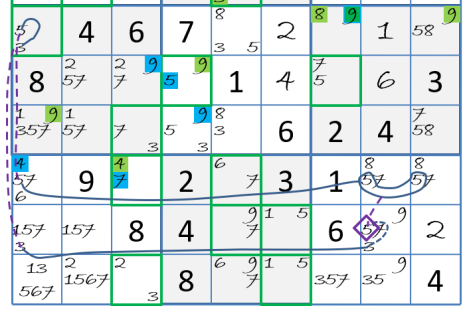 Boomer 4 looks like an ANL requiring a different spotting process. But no, it’s also a boomerang, from 3r8c8, coming back on a grouped 5-chain. 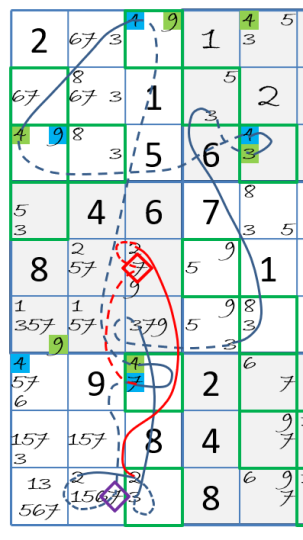 Instead of the mayor in a convertible, now we get a grouped AIC ANL.

The boomer spell is decisively broken when the ANL removals enable the finned swordfish below.

The logic is: if the extra candidate spoiling the fish is seen by the victim, then were the victim to be true, its vision would remove the fin, making the fish valid and victim toast. If the victim and fin share a box or line, call it a finned fish. If the wink is an inference chain, call it a kraken fish. 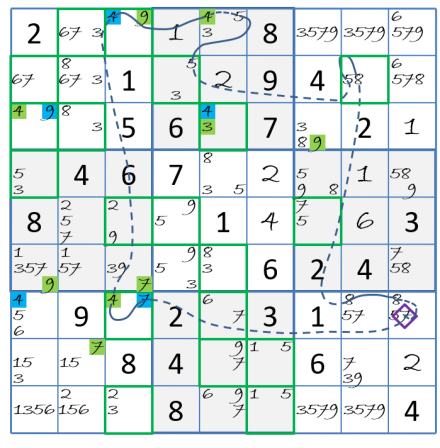 Sudokuwiki can now return to the parade. It gets boomer 7 from 8r7c9, which gains a bv,

The expansion traps 8r4c5 and 8r6c9 bring C8 and an XY wing, enabling

a simple 5-chain ANL (red), followed by XY ANL that destroys one of its nodes. N5 is confirmed as a hidden single in E or r6., whereupon

Next week, we follow two Sudokuwiki paths from the 785-wing, without the pattern analysis or recorded coloring. One path is humanly practical and one isn’t.