This post picks up on the Sudokuwiki/Sysudoku resolution of Nakamoto Extreme 63 where it was overtaken by pattern analysis and coloring, and finishes it in two ways, one humanly practical and one not.

Sudokuwiki doesn’t maintain coloring clusters between moves, or use pattern analysis to expand them.  After the 785-wing in the solution of the previous post,  Sudokuwiki continued with a two solution paths  too instructive to pass up. 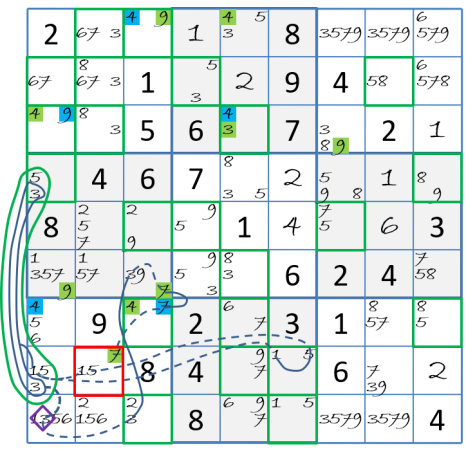 The first continues with an Andrew Stuart cell forcing chain. The idea is to remove a candidate that forces all candidates in some cell to be false. It takes a modern computer very little time to determine what a single candidate forces out, but how many such examinations fail between cell forcing chain successes? Way too many for human tolerance.

The 3r1c9 removal enables a confirming ANL enlisting a UR slink and an ALS node. What is a UR slink? The rectangle r89c16 presents a multiple solution if both 3r8c1 and 6r9c1 are false. Therefore, If one is false, the other must be true. A strong link in the ANL.

Now, after a simple BARN,

Next, an APE, in which the ALS excludes 15, and the bv at r4c1, 35, as placement combinations in the aligned cells.

Then an ALS AIC nice loop expands the cluster to trap 9r6c3 and bring in C8. 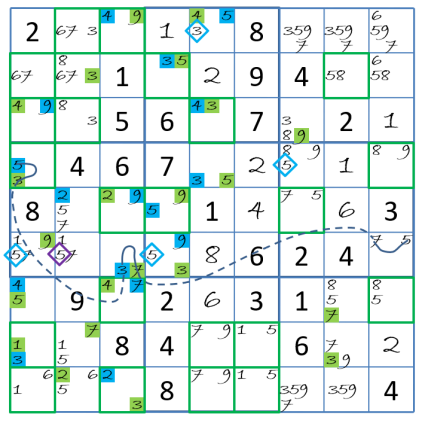 The further expansion traps four candidates and repeats the XY-wing of the last post.

The follow up to E5 proves green to finish Nakamoto 63 the Sudokuwiki way.

Andrew Stuart’s Sudokuwiki solver has an option to bypass specific methods. When Stuart’s cell forcing chain is bypassed, the next method after boomer 7 and the 785-wing is this ALS toxic pair. 3r9c1 is eliminated because it sees all 3’s in both ALS. Since only one ALS can have a 7, all values are locked in one of the ALS, including one of those 3’s. The toxic pair takes the place of the cell forcing chain in the Sudokuwiki solution path.

In Stuart’s Sudokuwiki strategies, “rule 2”  is attributed to forum guru David Bird, but not explained. A clue to rule 2 is the fact that 9r6c3 forces both shared 3’s in the SW box to be true. That is because it forces 9 out, and 7 into the orange ALS, along with 3 and 2.

this effect can be described this way:

The reason is, when an unshared value is removed, it forces the common value into its ALS,  removing the common value from the other ALS, and leaving both ALS locked. In the above example, 9r6c3 must go because single 3’s in both ALS share a box and can’t both be true.

It’s not that that the outside candidate can’t be true, removing a value set. It’s that the effect that has in this case violates Sudoku placement restrictions.

Next week, we consider what Sudokuwiki can do with Nakamoto Extreme 83. You must have the book by now. Are you using another human oriented solver? If so, tell us about it.