Finishing with no advanced moves, the Extreme Sudoku 2 collection proves less than extreme. However, the collection, including the last three selected puzzles, 154, 175 and 196, have many worthwhile examples of basic slink marking in action. 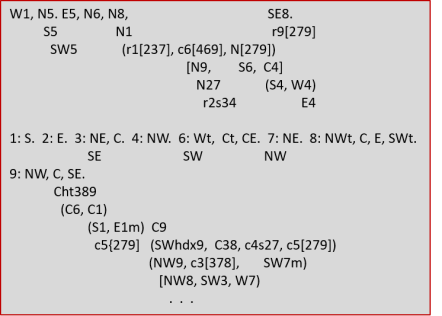 bypass, a column 3-fill steps in front of a box 3-fill. You can read that in the basic trace,

but here you have the hidden triple Cht389 that brings a quick collapse in box marking.

You needn’t search for these. Just be aware of the count of box slinks against the free cells.

As 9 arrives, three slinks are confined to three cells, so only two cells are free. The missing value 1 is only allowed in r4c4, leaving only r6c4 for the 6 value.  At this time you may be watching the SE box for any confinement of the missing 2 value. The hidden triple doesn’t allow time for that to happen.

grid after the bypass in Puzzleproof Extreme 175.

Everything seems to come along as needed, as it traces out the typical Puzzleproof Extreme path. 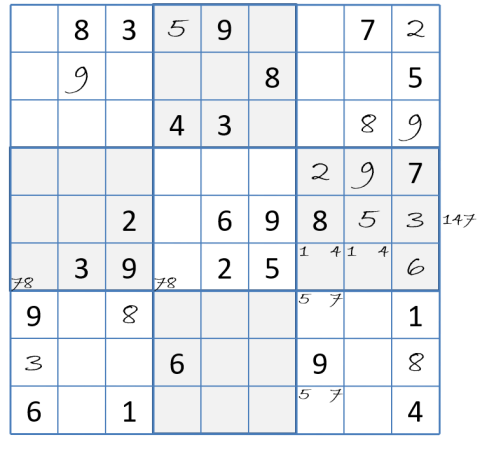 The last to leave, but the first to go, among the Puzzleproof Extreme 2 review puzzles, is 196.

The wrap up in the bypass is aided by the c7s57pair, due to the East box filling and values 5 and 7 being forced into the two cells by their candidate positions in NE.

The bypass trace shows this effect of the E5 cause is third in line, but quick to act. The steep collapse includes  a hidden dublex. 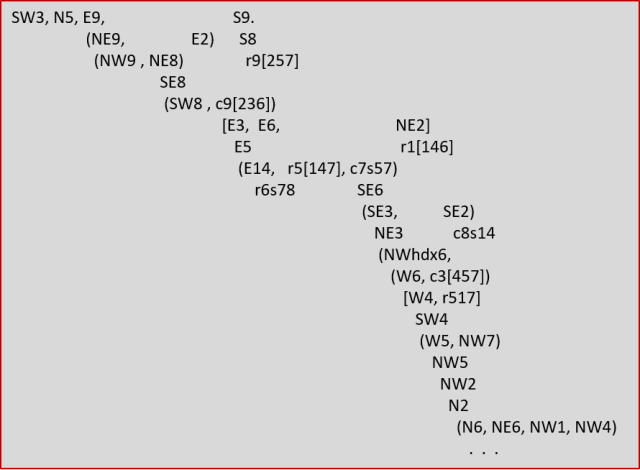 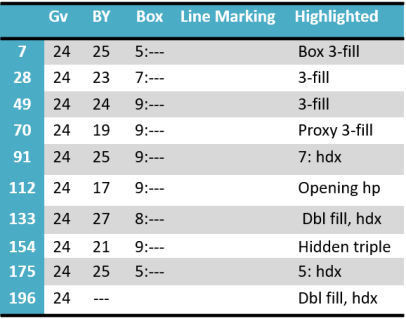 So the Puzzleproof Extreme Sudoku 2 rating is newspaper 5-star. However, provides  many basic happenings of entertaining value to human solvers. Admittedly, several of these were only discovered in my second reading, guided by a trace of the first solving.

Also worth noting is that many bypass breakthroughs actually come to my attention afterwards, in box marking and  line marking. They are presented as bypass effects because Sysudoku is not about my accuracy, but the humanly friendly methods that sysudokies seek.

Next post ends this series of basic level puzzles with a long sought Dave Green Conceptis, one that breaks the line marking barrier. This Akron Beacon Journal Saturday May 2 4-star defied me on newsprint, and got into Sysudoku Advanced with a pair of unique rectangles. Or maybe I missed the basic move that proves otherwise.  If so, inform us with your comment.