This post reports coloring trials that gain the solution after forcing chains when Sudokuwiki gives up.   This includes an example of a grid diagram illustrating the route to contradiction in a breath first trial trace. Then we close with a comment  distinguishing Sysudoku trials from the less than logical practice of trial-and-error.

Red is our choice for the trial, based on the color bridge of the previous post. Since blue and red is impossible, by assuming red, we can include the green candidates with them. 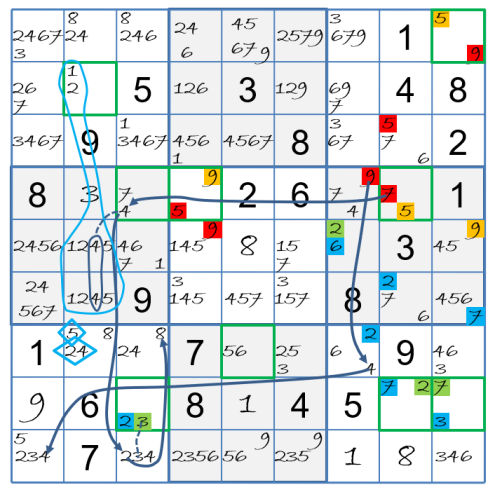 Red with green fails, and our diagram shows the shortest inference paths to the contradiction, two SW8 clues. Red forces 8r7c3, but creates a naked triple that wants 8r7c2. The arrows show how one clue leads to another.

The diagram  is easy to derive from the breath first trial trace. Just follow the paths directly to the two results in conflict, adding supporting paths as needed. 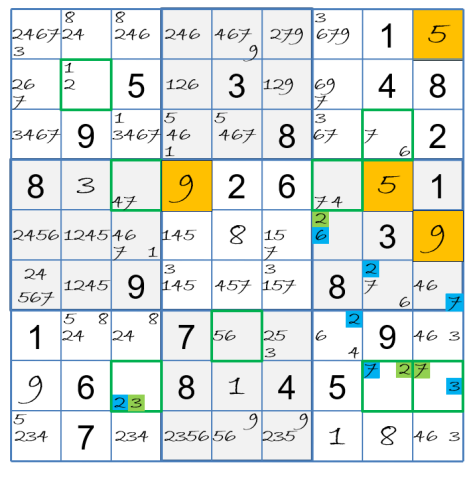 The original post found a grouped ANL and two irregular XYZ wings expanding the blue green cluster for the remaining trial. But alert reader Dov Mittelman pointed out that the wings depend on the elimination of a candidate by graphic typo.

To correct that, we go with the base grid for a blue/green trial, as left by the red wrap Blue or green?  Green removes few candidates and creates no clues. So the trial choice is blue. 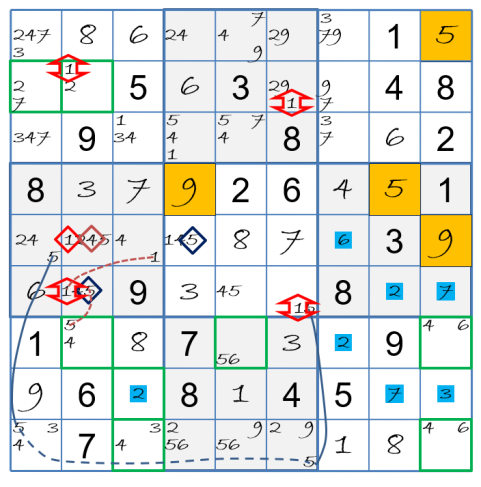 This path is duplicated by in the bypassed trial of the next post, but not with trial marking and breadth first grid. 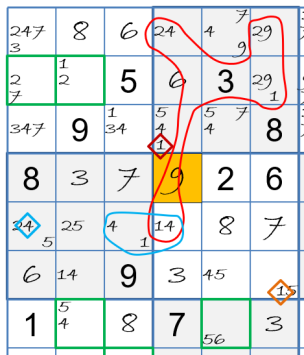 Simple follow up now brings a decisive BARN, a naked pair, and a final breadth first collapse below 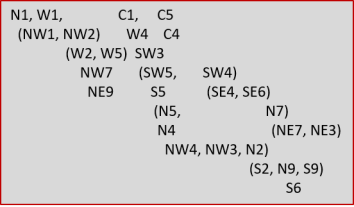 There are several types of trial endorsed by Sysudoku that we hope to illustrate in the ultrahardcore review. But one type we don’t endorse. Let’s take a bivalue cell, say r7c5. Now we do a “trial” based on the knowledge that 5 or 6 must be true.  If that is indecisive, forget it and try another bi-value cell. Otherwise try another with the clue and removals we just gained.

Repeat until the puzzle collapses then, go on the next puzzle. To this process, Sudoku lovers apply the term “trial-and-error”, to exclude it from logical solving.

We could have ignored all the information gained about ultrahardcore 3, and started trial-and-error as soon as all possible candidates were available. We could be checking Stefan’s answer, and claiming we have solved this one. Doing this, all we would know about ultrahardcore puzzles is that they take longer. It certainly isn’t logical to spend that much time to learn nothing. Computer’s do it, by following logically constructed code, but they are expected to learn nothing.

Next time, we do the coloring trial on ultrahardcore 3, before forcing methods, that we bypassed earlier.  Also we begin what logically follows a solution by trial, the search for a humanly practical solution path without trial. That leads us to several new things.