This post does the basics on the second Stefan Heine ultrahardcore right page under review.  Then it shows eight ways to do the five advanced moves up to forcing chains, two of them duplicated by boomerangs. It closes by  identifying removals for three Single Alternate Sue de Coq trials, holding the trials in reserve.

Sysudoku Basic begins with 4-fill which resolves to a 3-fill.

Advanced begins with a busy grid. 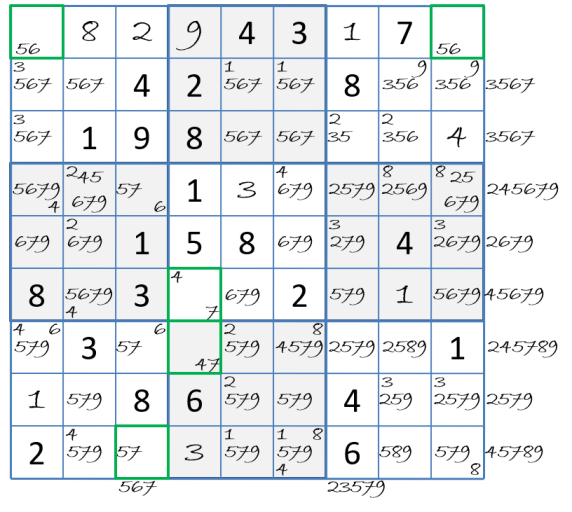 The 4 removal also allows a naked quad in c6 to accompany the naked triple in the S box allowed by S7 removals. 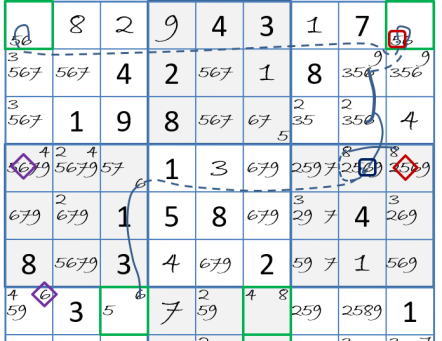 Then a section starting at 5r1c9 is re-used for one of Phillip Beeby’s one-way chains. If the starter candidate 5r1c1 is true, 5r4c9 is false, of course. But if the starter is false, the chain forces 8r4c9, making 5r4c9 false, regardless.

The one-way is also a grouped boomerang, starting at 8r4c1. One-ways belong in the Sysudoku AIC building phase.

There are at least two more ways to remove 5r4c9.  Both Beeby and Sudokuwiki found the grouped boomer at left, starting on 8r4c9. 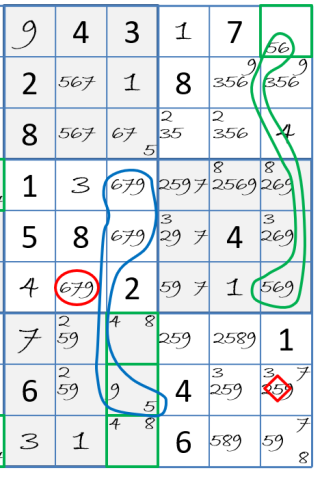 Sudowiki’s digit forcing chain is an ALS ANL. One terminal is the ALS 5 value group.

Instead of going there, let’s look at a Sue de Coq trial variation proposed in  Sysudoku, the Single Alternative Sue de Coq, or SASdC. Here are three examples.

In Sue de Coq, the contents of a box/line intersection is dictated by two ALS in the two bent remainders. For a Sue de Coq example, suppose r7c5 became S2.

It removes 57 from r9c2 without trial, because the 5 or 7 matching that alternative must come from r9c3. Similarly the 8 or 9 must come from the ALS 589, so the other SE 9’s are removed.

But that is enough for an often effective trial. The bv does narrow the possibilities. SEr9 cannot contain 5 and 7, so either it contains 5 or 7  (the (5+7) above), or both 5 and 7 are missing, hence the second term. In a trial of SEr9 = 6(89+98)  a contradiction removes that second term, and a Sue de Coq is in effect, for the single alternative and its remainder. If no contradiction, the puzzle may be solved. The SASdC assumption is very specific.

Looking back to the full grid above, there are three SASdC’s available, and we can calculate the removals by contradiction for all three. But just keep them in mind. We don’t need to perform a trial unless it turns out that we can use one of those removals.  A red trial  failure removes 56r3c1, a blue one removes 5r7c1 and a green one,  57r9c2.  Work these out and you’re in command of SASdC.

Next time, ultrahardcore 47 is solved with a pattern trial. Want to do it again? A reader solution to ultrahardcore 47 without trials? Have your trial free solution path in for the post after next. Identify any solver used. I hope it’s short enough to publish here for you.