This post bypasses Sudokuwiki’s  forcing chain parade with a value pattern trial, strengthened by the Single Alternate Sue de Coq analysis of the last post.  One pattern is tried and fails, leaving a coloring cluster. When the trial of the chosen color proves indecisive, the opposing color is taken to a contradiction, promoting the chosen color to the true one before continuing to the solution.

Value patterns are another avenue for decisive trials.  A value pattern is a possible placement of the remaining candidates of the value among the units. It is revealed as a freeform segmented line crossing the grid and hitting every candidate just once in each box and crossing line. Only one pattern is true. In a coloring cluster, the true pattern candidates are always the same color. 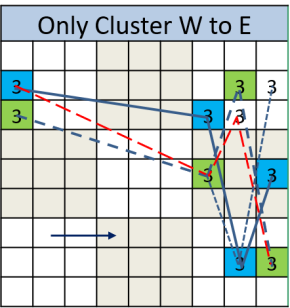 Here is the 3-panel as the forcing parade steps off. Going West to East, the freeforms show four possible patterns. We’ve colored the candidates to reveal the single blue/green cluster that is compatible with the possible patterns.  The red dashed freeform is one of two starting on blue, and prevents any other pattern starting green. The solid line blue pattern permits one of the two patterns starting green to complete a cluster. The cluster pair leave two orphans, candidates outside any pattern.

In the SASdC analysis of the last post, we learned that failure of the NWr2 = 374 would leave 37 in r3c1. That means tests of blue patterns will start with an extra clue 7r3c1.

Let’s test the NW SASdC, then the red dashed pattern, then with the blue/green cluster confirmed, the blue pattern.

Going back to the SASdC analysis grid of last post, here is the breath first trace of the NW single alternate Sue de Coq, testing NWr2 = 374. It fails with two 6s forced to the same row. 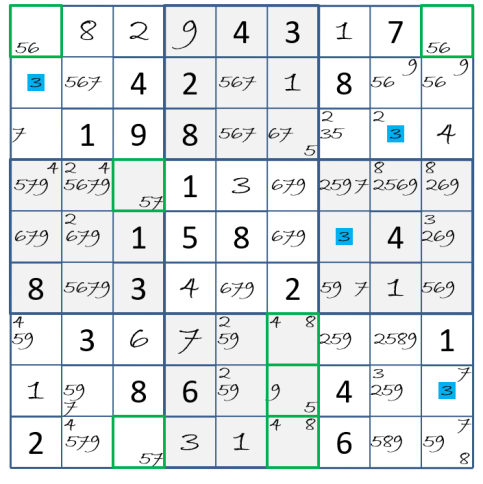 Next is the set up for the trial of the cluster blocking pattern:

That pattern leaves both 4’s in W and r4.

Now in the confirmed blue/green cluster, we choose blue  for its extra clue. The follow up ends with a naked triple. 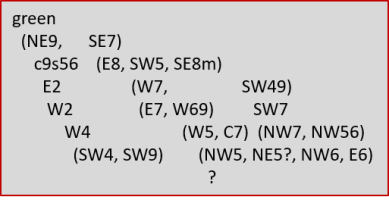 After Sudokuwiki pulls in a grouped AIC boomer, we go back to try green, just in case that test is more decisive. It is, reaching a contradiction.

Now back on the naked triple and grouped AIC boomer, it’s no longer a trial. 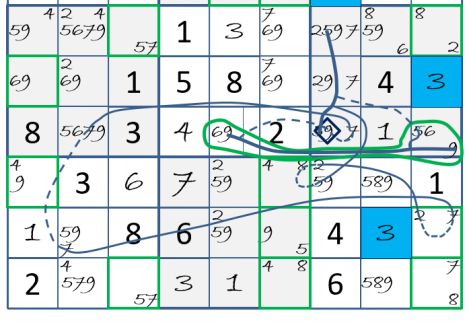 Next, Sudokuwiki finds this ALS boomer, starting with 7r6c7, around to the 5 group, then to ALS 5, out to 9r6c7 for an AIC wink. 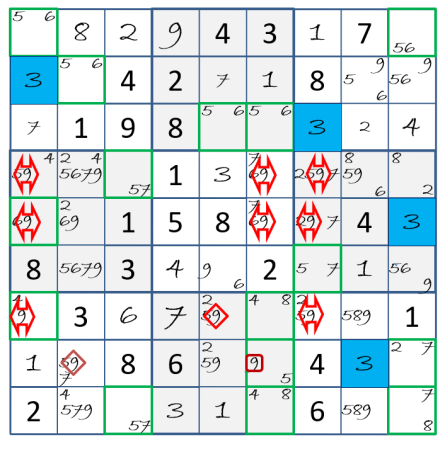 Then a finned swordfish, plus boxline.  Victim 9r7c5 is in the fin box, and its removal triggers the SWr8 boxline. After SW57 => SW49, we get 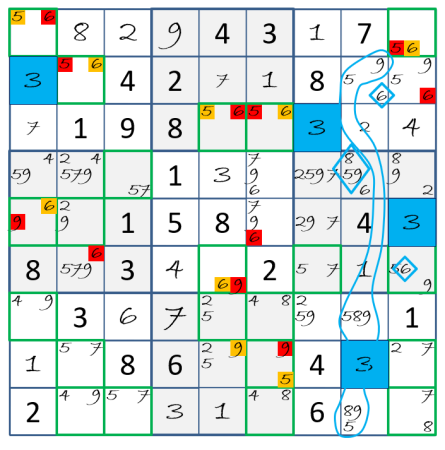 The remaining bv field invites coloring and the cluster expands by two traps, reaching another naked triple and E6. 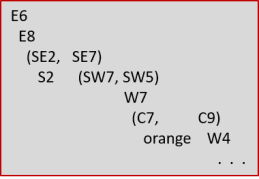 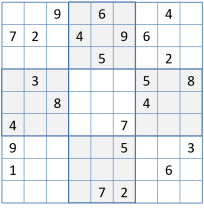 Unless a reader comes up with a trial free solution of 47, the report on Heine’s ultrahardcore 91 begins next week.