This post carries a pair of clues, gained a trial of an alternative pair of clues,  to a solution to Stefan Heine’s ultrahardcore 179. The resolution requires a pattern analysis on the 5-panel, aided by two coloring clusters.

Going back two posts, here is the full grid before the trial. So happens, there’s an empty BARN that Sudokuwiki did not report, because there are no victims.

The follow up to the new clues 8r2c9 and 8r5c8 includes a boxline elimination.

In the unique rectangle type 1, Beeby removes 7r1c6, but we can also remove 5r1c6. Either 5 or 7 being true generates a deadly rectangle.

Beeby continues with the ALS_43 below

and the overlapped ALS-wing to the right. 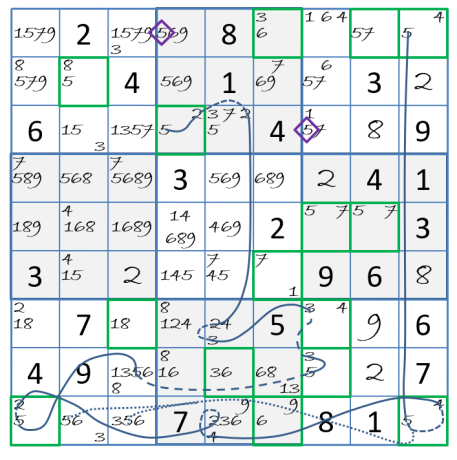 The complex 1-way takes less time than a regular AIC on Beeby. I think it’s because the full use of one way AIC makes much more of each opportunity, and more are available.  When you ask for one, you get the first one Beeby comes to. This one starts on 5r1c9, suppresses two 5’s to make 5-slink in the SW box. It looks like an ANL, but is not. It depends on the 1-way AIC. If the starting value is true, both victims are false, and if it is false the AIC turns on 5r3c4, and both are false. 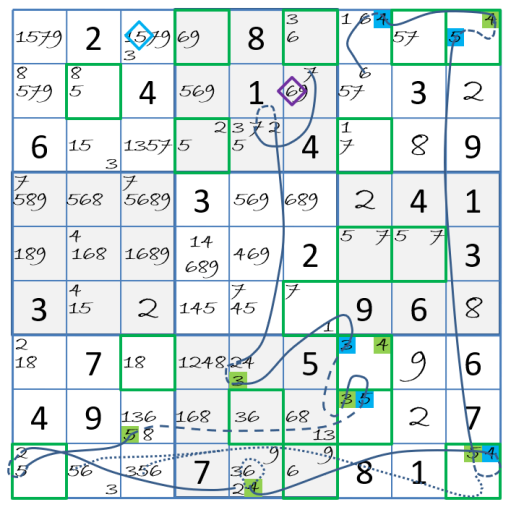 There’s much the same structure in the second complex 1-way. There’s some shifting because we’ve added a cluster and added slinks.

Coloring brings a trap in r1c3.

and an overlapped ALS_57.

One more complex 1-way,  requiring only one stiff arm block to get the 1-way AIC to 9r5c4, which if false regardless of 1r6c6 being true or false. The Cr6 boxline removes another 1. 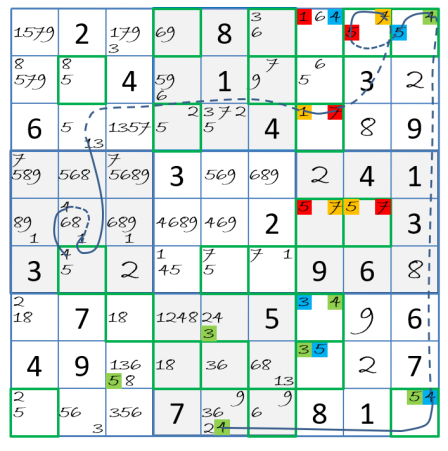 Finally a chain ANL prompts us to look for a second cluster, since the blue/green one isn’t growing.

All of the candidates of the true pattern are the same color. For any combination of two colors to be true the two colors must eventually merge.

In the 5-panel, the combination of green and orange is possible for only one pattern. That’s a very specific case to try. 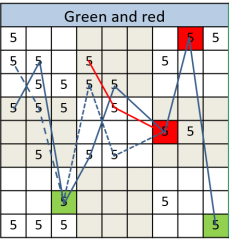 The combination of green and red leaves four patterns available. The trial is less specific.

The contradiction, traced below, is unusual.

9r5c5 forces a hidden pair in the West box, to join with NW79 for a deadly 79 rectangle. 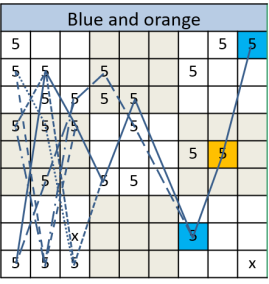 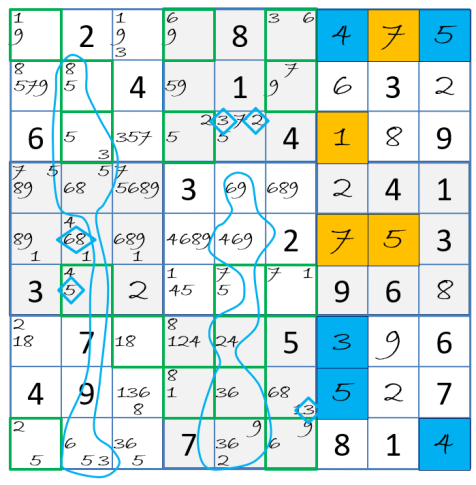 On the grid, the 5 pattern restrictions produce a naked quad and naked quint placing N3.

and a hidden unique rectangle  as 9r4c6 forces 6 in two corners, and the slink forces 9 in  the opposite corner.

The contest is ends with a Beeby ALS_46, and the SWr9 boxline triggering  the collapse with S9. 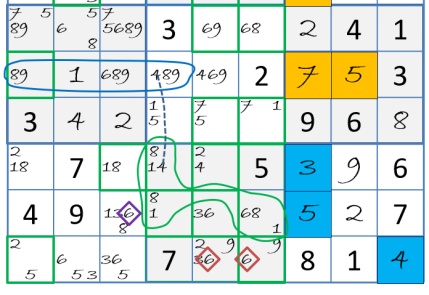 Next week, its on to  ultrahardcore 223.